Green on the Go

For Austin Green Art, every day is Earth Day – or eARTh Day

Every time I am lucky enough to talk with Randy Jewart, Austin Green Art's founder, I can't

help but wonder when this guy will run for public office. Coming down from last month's jam-packed eARTh Day celebration, hosted by Austin Green Art in Republic Park, you might think Jewart would need a break. But as momentum for environmentally savvy art and action builds in Austin, not to mention worldwide, Jewart and Austin Green Art are on the move as well.

Austin Chronicle: So tell me a little bit about the response you got to this year's eARTh Day celebration in Republic Park.

Randy Jewart: eARTh Day was a big success. We had a great time with more people involved, more volunteers. In the first year, we had one organization, Keep Austin Beautiful, there to support the event. This year, we had close to 50 different community groups and businesses behind us. We learned a lot again this year, and people are already excited about planning for next year.

AC: Now that eARTh Day is over, what's next on Austin Green Art's agenda? "We are working with ideas about how to Grow Austin Weird. The idea is to re-examine landscape and public space and the community's connection to the land itself. We are trying to see what Austin might look like if everybody was growing food in their yard." – Randy Jewart, Austin Green Art (Photo By Bret Brookshire)
RJ: Spring continues to be our main programming season. We just finished an installation at Connally High School using old, trashed tires, which was great. The art teacher invited us in for a project, and Robby Lee and J. Muzcac of Austin Green Art spent some time brainstorming with the teacher and the kids who ultimately voted for what would become a tire-swing project. The kids painted around 34 used tires in wild colors; some had nature themes, and some were identity-based pieces. We used rope donated by Robby's rock gym and hung the tires in an arbor area behind the school. About a dozen were made into swings; and others were up in the trees for decoration. When the kids got out of school, it was as if there were hundreds of them swinging, running, spinning, pushing, and then they'd load up onto their buses and leave the swings dangling in the trees, wondering what hit them.

AC: So from eARTh Day to school installations, what's at the top of Austin Green Art's list of goals for the rest of the year?

RJ: We are working on a garden project called Grow Austin Weird. It's a combination of several things that came together when I met J. Muzcac last year and he told me about the garden he and his seven roommates planted in their front yard. Taking their cue from Edible Estates, which is essentially an attack on the American front lawn, these guys tore up their grass and planted a 20-by-20-foot garden from seed. The ground was terrible, full of concrete, but the garden grew. This group of guys fed themselves from it; they fed the homeless; they also got out and met their own neighbors in the process. Environmentally, the idea of eating locally is becoming an international campaign point for a number of reasons: organics being the mainstay of this campaign from a health perspective, along with an emphasis on the sustainability of organic versus factory farming. There is a famous picture out there of a plate of food that is labeled with how many miles the food travels to get to your plate. And it shows that we are creating ridiculous amounts of C02 emissions moving food around the way we do.

From the art perspective, Grow Austin Weird is about both community and aesthetics. Austin is projected to grow to two to three times its current size in the next 30 years, and though we're keen to "Keep Austin Weird," we do realize that this will be impossible. So, instead, we are working with ideas about how to Grow Austin Weird – not just from a garden perspective but also from a development perspective. The idea is to re-examine landscape and public space and the community's connection to the land itself. We have these really big ideas, and there is so much space in Austin that could be gardened. We are trying to see what Austin might look like if everybody was growing food in their yard – and we're using South Austin as a model, as the kernel, just thinking about how Austin Green Art can contribute to development in keeping with what Austin is and what it wants to be.

AC: So is Grow Austin Weird geared more toward individuals or developers?

RJ: The goal is to break ground. We have some projects brewing with developers that might turn into fairly large-scale projects, and we're excited about those. But we are also excited about planting at home. We just decided we'd throw down and start, and that would help with getting people excited as we go. It's worked out really well; Austin Green Art planted small gardens at my apartment complex, including two beds in front of the afterschool-care building. We planted five beds at the Dell Jewish Community Center near the Early Care Program for preschoolers, and we just got a $500 grant from Keep Austin Beautiful to support the UT garden they are working on with the Campus Environmental Center. 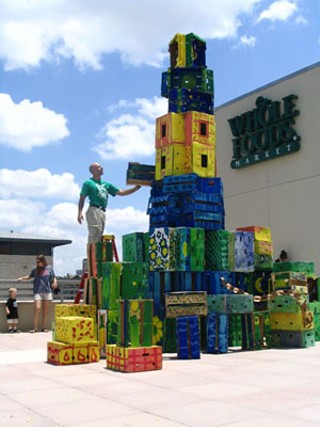 AC: It sounds like you are bringing groups and people together in this process ...

RJ: Yes, just from this community Grow Austin Weird perspective, we want to start with the idea of vegetables and community and bring about the artsy side of it by thinking of something that belongs to the neighborhood or the apartment complex as a whole and not only to the individuals in it. We're working with teachers, administrations, kids. The Sustainable Food Center is donating seeds and plants. Down the line we hope to create a Web site for people who find out about what Grow Austin Weird is up to. We hope it will encourage them to grow stuff wherever they are, to chat together about what grows well and what doesn't, to send in pictures of their gardens, and to break down lawn perfectionism for the sake of something fun, experimental, and community-building. It is kind of intimidating to start if you don't have experience with planting, but the great thing is, once you get your hands in the dirt, you just dig in and add some water, and things grow up on their own.

AC: It sounds like you have your hands full on that front alone, but I've heard you are working on a project at the Domain as well, right?

RJ: Yes, things are definitely happening there, too. We have put together some preliminary ideas to help the Domain organizers see what a sustainable art plan for Phase II of the Domain would look like. We are also tying up all the paperwork that will allow us to get into Building 60 from the old IBM plant on-site in order to work with some of the old tech pieces in there for sculpture, etc. In fact, Kirk Rudy [has just handed] one of our first sculptural pieces over to IBM at a luncheon on Phase II. While Austin Green Art may or may not be involved in the installation of the Domain's public-art plan, having the opportunity to work with developers who are thinking about sustainability and art is a great experience.

AC: And do I dare ask what else?

RJ: Actually, our goal for the coming year is to bridge connections with organizations outside of Austin. While we want Austin Green Art to remain Austin Green Art, we'd like to take an ambassadorial stance, moving out nationally to show how Austin is pushing the envelope of how art can operate within a community. We are partnering with a group called Forest Ethics, who, after years of work, finally turned around Victoria Secret's catalog mailing operations by mounting their own "Brand Slam." In the case of Victoria's Secret, which sends out 1 million catalogs per day, Forest Ethics put together ads with models in hiking boots and chain saws that effectively got VS to agree to stop using paper from the Borealis Forest in Canada. VS has now switched to sustainable and renewable sources for their catalogs. Which is significant not only because of their output but because of the impact these corporate changes have on other corporations. Most cataloging companies operate according to the 2 percent rule, which means that for every 100 catalogs they send, they expect two to generate sales. Overall, paperwise, the Borealis Forest is the number one catalog target. Two acres of that forest, now as large as five states the size of California, are logged every minute. And 80 percent of what they are pulling out of this forest is coming to the U.S. as toilet paper, office products, and catalogs, which means it is going straight into the trash as fast as it is being cut down. As one of the upcoming outside projects for Austin Green Art, we're looking forward to helping Forest Ethics with their next Brand Slam.