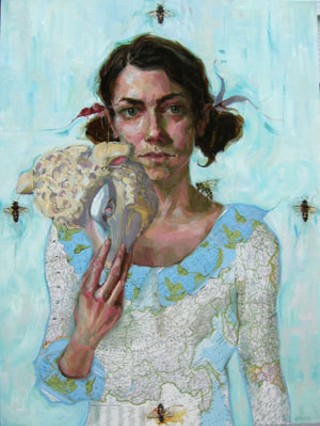 Wally Workman Gallery. Through May 26

Jennifer Balkan used her prodigious skill as a figure painter to create a fantastic realm replete with hidden symbolism and personal meaning in a new body of work on view at Wally Workman Gallery. The Austin-based artist holds a Ph.D. in sociology and began painting in 2001 following a trip to Europe, where she was inspired by experiencing firsthand artworks previously available to her only in books. Since then, Balkan has had a slew of shows in Austin and elsewhere, in addition to teaching art classes in town.

Balkan takes up certain surrealist painters' penchant for self-portraiture and dense symbolism in her recent paintings, which are executed in oil on panel. In The World and The West, she depicts herself from the waist up wearing a shirt made from actual strips of map collaged onto the painting. Bees mysteriously buzz around her head – in The West, she holds one between thumb and index finger as she stares out at the viewer. Are these insects a personal totem? Are we meant to account for bees' homeopathic qualities and understand them as symbols of healing? Balkan doesn't provide any clues, and much of the work in the show is equally open-ended.

Take another series, where masked figures wearing garden-party dresses strike alluring poses seemingly cribbed from fashion magazines. Each woman is framed by a decorative pattern of diamond shapes or fleur-de-lis in gold, light blue, and white, with a hand or foot straying outside of the frame and confusing our sense of space. Balkan's coquettish ladies look at us from behind masks that resemble animals, further blurring the lines between fantasy and reality. A zebra, a bunny, a bird, a dog – it's a cast of characters straight out of a children's book. And like a fairy tale, we're left to wonder if there's any deeper significance.

The clearest message emerges from a group of smaller works that feature American junk food set against pieces of map. A half-eaten Twinkie obscures France, Hostess Cup Cakes blanket the Northeast, while Balkan dubs a burger, fries, and a Coke the new "language of love" in two other paintings. Here the geopolitical statement is obvious, albeit tempered by the dreamlike world conjured throughout the show.

Balkan's loose brushwork dapples figures with highlights of blue, green, orange, and pink. The current rage for flatter media like acrylic and the ubiquity of works on paper in Austin galleries make these oil paintings stand out. The least successful works in the show, however, also have the most traditional subject matter. Balkan's nudes, which also include collaged maps, are well executed but less compelling than her other self-portraits. There's a quirky element in The World and The West that falls out of paintings like Extinction, where a swathe of map wraps part of an otherwise nude female body. Balkan is at her best when she leaves a little more to the imagination.