This is the 15th year that local critics have put their heads – and pens – together to recognize the year's most exceptional work in town and high time for an awards tune-up. You see, these scribes initially focused their attention solely on theatre, and that's what they handed out awards for. By the ninth go-round, however, they had seen so much outstanding work outside that discipline that they decided to expand the honors to include the rest of the performing arts – i.e., dance and classical music – and the visual arts, too. So 18 new categories were added to the 30 or so already in place, and three times the critics took seats at the table. Still, as positive a step as that was, it made for a most unbalanced awards presentation, with one discipline garnering almost twice the recognition of the other three combined. So, after much discussion and consumption of adult beverages, the members of the Critics Table have restructured the categories to spread the honors a bit more evenly. Gone are the distinctions between gender in all the categories and most of the divisions between genres in theatre, while new categories have been created to broaden the recognition of achievements in dance, classical music, and the visual arts. The number of awards still aren't even across the disciplines, but they're considerably closer – theatre (10), dance (6), classical music (8), performing arts design (5), visual arts (8) – and we'll continue to refine them in the future. That said, the nominations for the 2006-2007 Austin Critics Table Awards, covering the period from May 1, 2006, to April 30, 2007, were assembled by the following arts writers: the Austin American-Statesman's Michael Barnes (arts), Clare Croft (dance), Randy Harriman (music), Erin Keever (visual art), David Mead (music), Joey Seiler (theatre), and Jeanne Claire van Ryzin (arts) and the Chronicle's Salvador Castillo (visual arts), Elizabeth Cobbe (theatre), Amanda Douberley (visual arts), Patti Hadad (theatre), Rachel Koper (visual arts), Nikki Moore (visual arts), and Robert Faires (arts). The Critics Table will present the awards and induct the sixth class of local legends into the Austin Arts Hall of Fame during an as-ever informal ceremony on Monday, June 4, 7pm, at the Cap City Comedy Club, 8120 Research. The public is welcome. Admission is free.

I Am My Own Wife, Zachary Scott Theatre Center

In On It, the dirigo group

Thom Pain (based on nothing), Hyde Park Theatre

At Home With Dick 2, Rubber Repertory

Have You Ever Been Assassinated?, Rebecca Beegle

Lowell Bartholomee, In On It

Joseph Evans, The Barber of Seville

Marcus McQuirter, Funnyhouse of a Negro

Katie Pearl, Kneeling Down at Noon/Wireless-less

Dave Steakley, I Am My Own Wife/Present Laughter/Take Me Out

Martin Burke, Take Me Out

Robert Faires, In On It

Glenn Peters, I Am My Own Wife

Rebecca Robinson, The Goat, or Who Is Sylvia?

Ken Webster, St. Nicholas/Thom Pain (based on nothing)

Kevin Jones, A Brief History of Helen of Troy

Marc Pouhé, Take Me Out

Zach Thompson, Take Me Out

Against My Will, Humdrum Collective

Amanda Butterfield, I Love My Dead Gay Son: The Musical!/I Am Not Tartuffe

Company, Have You Ever Been Assassinated? 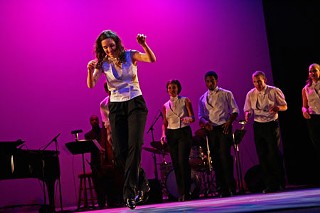 The Souls of Our Feet

Confessions of a Mormon Boy, Arts on Real

Hamlet, Actors From the London Stage

Sarah Davidson, The Way of the World/Slaughter City

Michael Raiford, I Am My Own Wife/Take Me Out

Leilah Stewart, Minus Tide/Have You Ever Been Assassinated?

Laura Cannon, Requiem/Have You Ever Been Assassinated?

Buffy Manners, The Souls of Our Feet/An Ideal Husband

Sarah Mosher, The Way of the World

Jason Amato, Requiem/I Am My Own Wife/

The Souls of Our Feet/Take Me Out

Diana Duecker, Kneeling Down at Noon

Natalie George, Have You Ever Been Assassinated?/ The Assumption

Craig Brock, Take Me Out

Avram Dodson, I Am Not Tartuffe

Matt Ryan, The Souls of Our Feet

"Parade," Ways to Get There, Dance Repertory Theatre

Katelyn Harris, The Souls of Our Feet

Jason Janas, The Souls of Our Feet

Brenna Kuhn, The Souls of Our Feet

Tasha Lawson, The Souls of Our Feet

Allisyn Paino, Taming of the Shrew

Matt Shields, The Souls of Our Feet

Cauleen Smith & A. Van Jordan, "I Want to See My Skirt," Testsite

"Take Me to Bed or Lose Me Forever," Volitant Gallery, Leona Scull-Hons curator

"The Gathering," Courtney DiSabato and Sean Gaulager (Else Madsen Gallery)

"The 'I' of Texas," Luke Savisky (First Night Austin)

The Things You Need to Know …, Reed Posey (Volitant)

"Over + Over," Austin Museum of Art

Mozart: Sonatas for Piano and Violin, A. Mozart Fest

Christmas at the Carillon, Conspirare

The Fall of the House of Usher, Butler Opera Center

Phillip Hall, Plump Jack/Fall of the House of Usher

Julie-Anne Hamula, Turn of the Screw

Eugene Perry, Waiting for the Barbarians

Richard Salter, Waiting for the Barbarians

David Small, The Barber of Seville

Agnes Vojtko, Turn of the Screw

Adriana Zabala, Waiting for the Barbarians

Michelle Schumann, "In a Landscape," Dialogues 2006