Each of the seven short plays written by Dan Dietz in Shrewd Productions' Trash Anthems unfolds like a gift being opened, full of surprising scenarios and sympathetic characters 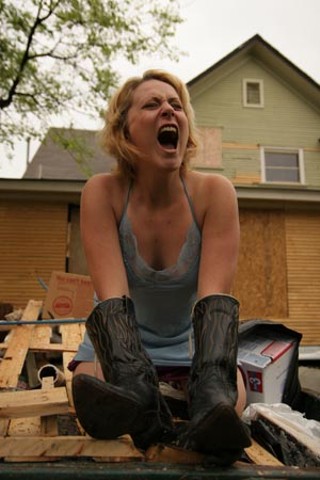 Hyde Park Theatre, through May 26

Shrewd Productions' Trash Anthems, an evening of seven short plays by Dan Dietz, has perfect pitch from the opening moments in which a man slumps into his Las Vegas hotel room and pulls out a letter cartoonishly labeled "SUICIDE NOTE." As he reads the note aloud, we learn that he is the unluckiest man in the world. He can't take it anymore, and he is going to end it tonight. Unluckily, his plans are foiled by a mistaken triple-booking of the hotel room. Enter the luckiest woman in the world, followed by the most ordinary man in the world, both of whom are similarly bent on self-destruction. Hilarity ensues.

The plays continue to live in this rich vein. Humor in the darkness. Laughter through the tragedy. It takes a damn good writer to have an audience in stitches over a woman who has just murdered her husband or a man who is about to have his tooth ripped out by a pair of pliers. Each of the seven pieces unfolds like a gift being opened, full of surprising scenarios and sympathetic characters. Dietz answers questions that we wouldn't think to ask. What would you do if you suspected your father had supernatural powers? What conversation does one have with one's co-pilot just before dropping an atomic bomb? What does Donald Rumsfeld see when he looks in the mirror? What does a feminist-studies major fear?

Each play is directed by a different member of Shrewd Productions, but the work remains cohesive thanks to production directors Monika Bustamante and Andrea Skola (who also works as a Chronicle classified account executive). A multifaceted set provides well for the seven different worlds. It's a visual collage that comes into focus throughout the course of the evening. Different elements stand out as they are alternately called into play: a bathroom stall covered in graffiti, images of Frank Sinatra, teeth and bones, a poker table, a pile of dirt. The running order is intelligent, sculpting an overall tone – like reading a book of poetry from start to finish and realizing there was purpose in the structure. Though the plays were written separately, they come together as if meant to be a whole. The performances are strong, notably Skola's turn as a scorned woman (her stage partner is a pair of boots) and Jude Hickey as a coked-up son who believes his father was Superman. Tom Coiner juggles the most roles, and his verve is a good match for Dietz's imagination. The longest and most somber piece is a monologue performed by Dan Dietz himself. It is called "A Bone Close to My Brain," and his character employs oversized paper and Pictionary-style drawings to explain his brother's madness. It has traces of the humor present in other pieces, but it is oh-my-God horrifying on a level the others are not. Dietz performs the piece with clarity and patience. You find yourself leaning into the gripping melancholy. The final play, "Kryptonite," sums up the strengths of the entire evening: the conviction of Dietz's language and the commitment of the performers. Two sons argue about their father's true nature while standing over his open grave. It is hilarious and touching. It is absurd and believable. And like any good theatre, and like all seven of these pieces of theatre, it is surprising.

Dietz is an inventive writer whose work utilizes the physical and intellectual potential of the stage. He describes these plays as "songs to beloved losers from across time and social strata." What makes someone a loser? What casts them to the edges of society? Where are the edges of society? In the worlds born of Dietz's mind, these edges are everywhere. A trash anthem can be sung by a powerful government official, by a superhero, by a feminist-studies major, by a kind brother, by all of us. No one is safe. Even if you do drive a Jetta (see play, catch reference). Shrewd Productions' Trash Anthems is a farewell to Dan Dietz, who is leaving Austin to teach playwriting at Florida State. Though he may be leaving town, no doubt Dietz's songs will continue to be sung in Austin.