With its quick tempo, rapid-fire jokes, and backstage look at Gone With the Wind, Austin Playhouse's Moonlight and Magnolias is accessible, short, and extremely entertaining theatre 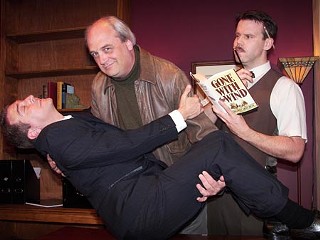 Larry L. King Theatre at Austin Playhouse, through May 13

Moonlight and Magnolias is Ron Hutchinson's behind-the-scenes comedy based on actual events, which supposedly transpired during the making of Gone With the Wind. A few weeks into filming, producer David O. Selznick realizes that he doesn't have a workable screenplay, so he shuts down the $50,000-a-day production and locks himself in his office with crack screenwriter Ben Hecht and veteran director Victor Fleming, whom Selznick has just hired to replace George Cukor. With only five days and a supply of peanuts and bananas, Selznick is determined that no one leave until they have a finished script. From slapstick to screwball to trenchant satire, the varied comic possibilities unfold immediately as it is discovered that neither of these two professionals have read the book. So Selznick, veering wildly from nebbishy to overbearing, and Fleming, notoriously macho and impatient with the pretensions of art, proceed to act out the story, one ridiculous scene after another, while Hecht puts it to paper.

The first act of the play is nearly perfect. Gray G. Haddock, as Ben Hecht, hits the distinctive hardboiled persona of a late-Thirties Hollywood writer dead on, all two-tone wing tips and fast-talking cynicism. He gets many of the best lines, and even the most devoted Gone With the Wind fans will find it hard not to laugh at his dry evisceration of the more glaring antebellum apologies implied in that familiar story. Michael Stuart does well as the boorish Fleming and, upon being yanked from the set of The Wizard of Oz at 7 in the morning, walks on with a truly brilliant opening line. As the desperate Selznick, David Stahl shines most when his wry self-awareness overtakes his grand impresario pretensions. Once these three get going, the play takes off, with insider gossip, quips, and retorts flying back and forth in the best Howard Hawks' screwball tradition. Director Lara Toner keeps the pacing of this Austin Playhouse production fast, and the absurdity mounts until a rousing debate on the moral reprehensibility of Scarlett slapping the young slave girl Prissy devolves into a hilarious bit of Three Stooges-style physical comedy.

Problems emerge in the second act as everyone gets far more serious and self-important. Hecht's self-righteous conceit as the racial conscience of the movie industry quickly becomes tiresome, as do the many speeches about the magic of film from Fleming and Selznick. Cyndi Williams, her voice a perfect Thirties-chorus-girl squeak, is very funny as Selznick's harried secretary, though she too is encouraged to ham it up a little too much by the end.

The set, also designed by Toner, is a flawless, lush re-creation of late Deco affluence, and the very small size of the Larry L. King Theatre works well with this production. The intimacy of the space and proximity to the actors create an effective illusion of being a fly on the wall in Selznick's office and therefore privy to all of these industry secrets.

The tiny theatre, the quick tempo, and the heavy succession of jokes drawn from a milieu already familiar to the audience give this production a feeling approaching cabaret. It is accessible, short, and extremely entertaining theatre, even for those who don't normally attend theatre. Judging from the many approving murmurs at the evening's end, it appeared that nearly every member of the audience enjoyed the production, and that really renders any other critical commentary extraneous and unnecessary. The people have spoken, and they like Moonlight and Magnolias.