Refraction Arts' newly expanded Fuse Box Festival is almost out of juice, but before it goes, it still has some electrifying new dance, theatre, video, and site-specific performance to deliver 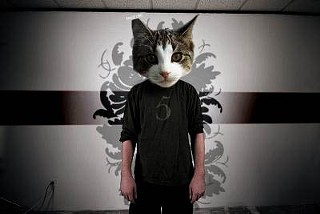 This year's newly expanded and exploded Fuse Box Festival is almost out of juice, but before it goes, Refraction Arts' celebration of mind-blowing new dance, theatre, video, art, and site-specific performances by outstanding local artists and leading creators from across the country is going to deliver some electrifying art. Here's the lineup for Week Three:

Fetish (and other dances), by Hijack. Taxidermy, terrorism, and the deconstruction of the creative process are all mashed up in this work by the Minneapolis dance troupe. April 26-27, Thursday-Friday, 8pm, at the Off Center, 2211 Hidalgo.

Neo Arcadia, by David Salinas, Lanneau White, and Mark Hensel. Pay a visit to the Transfiguration Temple, which promises to liberate your consciousness from human flesh, digitize it, and beam it to the stars. April 26-28, Thursday-Saturday, 9pm, at the Blue Theater, 916 Springdale.

The Will Sellari Show: The Cittens. In the fifth installment of his show, Austin video and visual-artist Sellari discusses the various forms of angels, clairvoyance, and his take on Las Vegas. Friday, April 27, 8pm, at the Blue Theater, 916 Springdale.

The Moveable Feast. A collective of writers, performers, musicians, composers, and other artists, led by Abraham Burickson, have created a 24-hour performance around the lives of five strangers who were interviewed for the project. The public is invited to take part in the work's first scene as the five subjects first encounter the world generated from their lives. Saturday, April 28, noon, at the Blue Theater, 916 Springdale.

Ticket prices are extraordinarily cheap – some events are free – and you can see everything with a festival pass for just $40! Such a deal, my head is exploding!

For the full schedule, call 927-1118 or visit www.refractionarts.org.