Halfway through the 365 days of 365 Days/365 Plays, Suzan-Lori Parks' dramatic project has everyone making theatre and in new ways 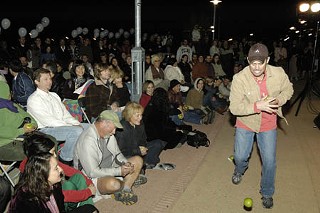 We are about at the halfway point of the 365 Days/365 Plays cycle, written by Suzan-Lori Parks and anchored locally by the Zachary Scott Theatre Center.

The lights have come up. You get to stand and stretch and consider what has happened so far.

Only in this instance, we are considering events that have happened over six months. Six months of real time, not stage time.

To recap: In 2004, Suzan-Lori Parks sat down every day and wrote a new play. Every single, day for 365 days. Some were topical, related to a season or a current event of the time, but most were short, less than five minutes. Afterward, she put the whole set in a drawer. Then her friend, a producer named Bonnie Metzgar, said, "Hey, whatever happened to all those plays?" and here we are, three years later, in the middle of the single largest theatre event ever. More than 15 cities and regional hubs, each producing 52 weeks of theatre, seven plays at a time. One theatre in each locale coordinates the schedule of area productions, but literally anybody can participate.

So far in Austin, the plays have been produced on the Pfluger Pedestrian Bridge over Town Lake; in and around local theatres, including Hyde Park and the Off Center; in front of the Zilker Christmas tree; at the Texas state Capitol; inside the Blanton Art Museum; and on several different college campuses. They have been produced in multiple languages, in buildings and out of them, in green tutus and in street clothes. Occasionally they have culminated in the lighting of sparklers.

The single most important operating principle in this whole expansive project is radical inclusion.

Radical inclusion is not a new concept. It is used frequently in theological discussions. You can find it discussed by Unitarian Universalists, Episcopalians, and Quakers, among many groups. Sometimes it refers to the idea of an all-loving, benevolent deity, and sometimes it refers to specific human acts, i.e., who is invited to the worship community. It's also a basic tenet of the Burning Man Festival: "Anyone may be a part of Burning Man. We welcome and respect the stranger." 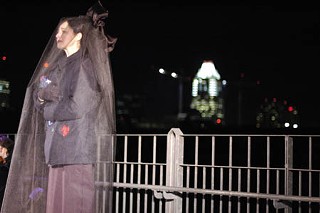 Ken Webster, artistic director of Hyde Park Theatre, produced Week Five back in December. "I did something I've never done before," he says. "I cast every person who auditioned." Almost 20 people showed up, more than half of them new, and they were all solid." Besides, one of the seven plays was set in an English class, and Parks never really says who the students are or how many are in the scene. Webster had enormous freedom to make a big choice. So he did. The cast of 17 made an exhilarating image on the tiny HPT stage. It was a visual moment of spectacle and conflict: How are they all going to work up there?

"Not only did we get new people onstage," Webster says, "we got new people in the audience. They have been back since." How does the artistic director know this so certainly? "I'm the box office guy, too."

Texas State assistant professor Nadine Mozon, organizer of Week 21, says that "permission to have low production values equals radical inclusion." There's no requirement for set, lights, costumes, or technology – there's no requirement that the plays even take place in a theatre. "We did ours as a guerilla uprising," she says, "different places on campus." Students from across the gamut of majors participated, including some graduate student directors. Because of the large Spanish-speaking population in the region, Mozon made a commitment to a bilingual presentation. "'Father Comes Home From Wars (Part 5)' was presented back to back in English and Spanish. The Jerry Springer Greek tragedy – since it was Greek tragedy and Jerry Springer, we had a Spanish interpreter throughout. It was Telemundo style."

Mozon moved to the Austin area from New York last August and is now finishing up her first year at Texas State, where she teaches acting and movement. She feels that with 365, she spearheaded a project with larger impact than she anticipated. Before 365 Days, her students were unfamiliar with Suzan-Lori Parks as a playwright, despite her many accolades. Their 365 project gave them access to a challenging, contemporary writer whom they could go back to and study more fully in the classroom. Mozon says that this kind of "sneaky learning" is like taking medicine with honey. But most importantly, she believes, "The students felt included in the writing."

There seems to be wide agreement that, somehow, 365 is inherently inclusive work. That the plays inherently invite participation, invite imagination. Mozon agrees. She says, "Suzan-Lori Parks invites and leaves it open as a writer." We're seeing this locally, as groups make unusual partnerships, experiment with functional and creative locations, and seem to find more ways to draw new performers in through organic multicultural casting.

The philosophy of radical inclusion is also affecting set designer Michael Raiford, who is working on Zach's production of Jesus Christ Superstar. "Why not apply this principle to a set, especially for Superstar in which our aim is to show the common man's connection to [his] faith?" So he has sent out a letter asking for community participation in the production's visual elements. The letter reads, "The production is set in modern-day Mexico, and the environment for the show is based on the tradition of mosaics. This art form has a rich history in Mexican and Spanish art. Because of the nature of the piece, and the deep passion that surrounds it, I have the desire to involve our community in the show. I want to see the design as an inclusive experience and have devised a way to include your personal point of view in the show." Zach is offering 4-inch-by-4-inch shallow boxes in which participants may create a mosaic. They may start with found objects collected by the theatre or whatever materials they can get their hands on. The mosaics will be included on the set and then in a silent auction to raise money for Zach's annual fund drive.

For Metzgar, 365 Days/365 Plays harkens back to the medieval morality play cycle, a point in theatre history when plays were about art as ritual rather than art as transaction. She and Parks decided that 365 would operate in the same spirit. It's more or less free to produce a week of seven plays. Most of the time the performance is free or by donation. No one gets paid, including the originators. And they believe that taking money out of the equation fundamentally changed everything. There are no expectations set up by a subscriber base, by grant funders, marketing campaigns, ticket sales. There's no risk; there's no consequence. The only thing that's important is to get together and read a play.

Parks and Metzgar put it this way: Radical inclusion means, "There's pie for everyone." And there's play for everyone, too.

365 Plays/365 Days continues through November 2007. In Austin, Week 24 will be produced by Briana McKeague on Sunday, April 29, 5:30pm, at 2105 Comal St. Opening acts include the Red Teasers and Francisco the Man, from Big Ol' Tire Fire. Everyone is invited to stay for a party following the performances. For more information on 365 Days/365 Plays in Austin, visit www.zachscott.com. 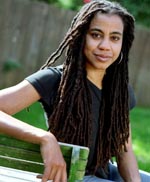 Yoga Drama
For the next year, Austin will be practicing daily public acts of creative expression as part of 365 Days/365 Plays