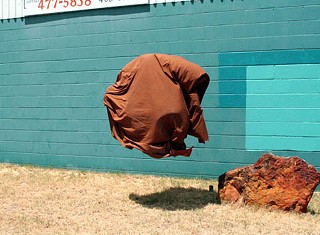 (Because of the significance and scope of the Texas Biennial, which is statewide in reach and spread across four Austin galleries, the Chronicle's visual-arts writers chose to review the exhibit collectively, in a dialogue. They covered each gallery separately. The review of works in the Butridge Gallery at the Dougherty Arts Center appeared in the March 30 issue. The reviews of works at Okay Mountain and Site 1808 appeared in the April 6 issue.)

Salvador Castillo: If we were to extract each of the spaces from the context of the Biennial, I believe the dynamics of the Bolm chapter would hold up.

Nikki Moore: I agree. So many issues came to the fore in these works, from mechanized uniformity in Tiffany Ann Carbonneau's work to surveillance in the work of William Betts, which ultimately lapses back onto mechanized uniformity in its creation, making a nice loop. David Ubias' work was strong; several pieces floating through Austin have shared the piecemeal style and freehand appearance of his 100 drawings, but something in the combination of themes and technique set his work apart. Mimi Kato's Yokai Zyukkei: Scenery With Monsters, mixing Toba Sojo's 11th century scroll-print style with contemporary imagery and dynamics is one of my favorite works in the Biennial, and I liked Yuppie Graffiti Tagger for its playfulness and thoughtful implications.

Beyond that, William Hundley's pieces surprised me: vibrant, glossy, colorful. They are a mix of scripting and freedom that hints at the potential for variance and unpredictability even within prescribed spaces and actions.

Salvador Castillo: I was going to reveal my attraction to Roberto Bellini's work, but after your description of the works, I believe I must apply it to all of them. I was seduced into deeper thoughts. The aesthetics focused my attention into the works. Forced to really look, my mind drifted excitedly among form, concept, and execution. I found this act especially rewarding from the Bellini, Hundley, and Kelly O'Connor pieces. Not so much with Ubias, Mark Collop, and David Chien, but vibrant is an accurate descriptor. Maybe it was the gritty characteristic that fortified the venue. There did seem to be an ecological/environmental awareness to the works. Carbonneau and Kato address human-Earth relations, Chien and Hundley address urban visuals, and, to a mechanic's son, Buster Graybill's inner tubes speak of industry before they suggest tubing.

Nikki Moore: Taking in your response, Salvador, I can't help wondering what worked here that didn't quite coalesce for the rest of the Biennial.

I learned that after the artists were chosen, the organizers and venue representatives sat around with scale models of the art and spaces, swapping pieces until the layouts were declared. I can see identities forming at each of the spaces: the DAC being "brainy," Okay Mountain being "pretty," and Bolm being a healthy mix of the two with a dash of urban grit. Site 1808, without a core identity besides "outdoorsy" installations, could easily have its work dispersed among the other venues. I could see Jarrod Beck, Tom Matthews, and Kurt Mueller at Bolm; Bunnyphonic and Gary Sweeney at Okay Mountain; and Noah Simblist, Brad Tucker, and Rebecca Ward at the DAC.

Nikki Moore: I have a hard time with the "brainy" descriptor. I'm not quite sure I could single out a description of the DAC. Its underlying threads – if there were any apart from the obvious "Texas artist" filter – were not clear to me. Actually, apart from Bolm, I had no real sense of where Texas art is active in a way that sets both the state and the artists in it apart from any other art scene.

Amanda Douberley: Where were the jurors – Ursula Davila, Fairfax Dorn, Kate Green, Valerie Cassel Oliver, and John Pomara – in all this? Their lack of presence – in the catalog, in programming, and apparently in the installation – is by turns annoying and totally mystifying. It is as if these artists were the obvious choices for the show, rather than the Biennial being the result of a set of criteria for evaluation that, it seems, we'll never be let in on.

Salvador Castillo: I think that's it. The lack of actual curation leaves the work wanting. Perhaps I gave the Biennial a free pass knowing the organizers are trying to bridge dialogue across the state – to be more inclusive before they begin to edit and craft themes. But how punk rock are they? Is it a DIY effort through and through? Why seek the legitimization from having institutional jurors?

Nikki Moore: If the Biennial is to serve as a bridge, then some curatorial cohesion, in the catalog and in the staging of the exhibition, is imperative. If it is a buffet, then a different approach is needed.

Amanda Douberley: We're getting at a key question: What is the Biennial supposed to be? Like "New American Talent" at Arthouse, the Biennial is a juried exhibition, so the pool of artists is limited to those who submit their work for consideration. I appreciated last year's "NAT" because juror Aimee Chang was up front about how she put the show together. Ditto for Dan Cameron two years ago. He said that he chose the work he would want to hang in his apartment and live with. Chang compared her picks with work coming out of Southern California, where she's a curator. Both exhibitions necessarily reflected personal choices that shaped the shows. I'm not sure I really want the Biennial spaces divvied up according to big themes splashed on signs, but even a juried show has a logic behind it that needs to be articulated somehow. The Texas Biennial should tell us something meaningful about art-making statewide over the last two years. Otherwise, what's the difference between one Biennial and the next?