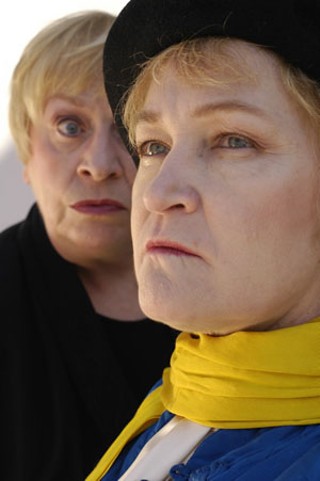 The Vortex, through April 29

Created by playwright Peter Shaffer as a vehicle for Dame Maggie Smith (known to Harry Potter fans for her portrayal of professor Minerva McGonagall, the tart deputy headmistress of Hogwarts in the film adaptations), Lettice and Lovage is the story of the unlikely friendship that springs up between Lettice Doufett, a tour guide with a taste for the dramatic, given to elaborating what she considers the scant historical interest of the Tudor house where she is employed, and Charlotte Schoen, her straitlaced superior at the British Preservation Trust. Charlotte, far from charmed by the inventive inaccuracies of Lettice's narrative style, terminates her employment, and out of this inauspicious incident, with a little help from a potent Elizabethan cordial, the two women soon recognize each other as kindred spirits, bonding over a shared a love for the colorful trappings of the past and a mutual distaste for the dull aesthetics and general mediocrity of the present era.

There are difficulties inherent in taking on a role created for someone else, and at times in this Different Stages production, it is hard not to think wistfully of Smith's incomparably dry diction and virtuoso capability for archness, but Bobbie Oliver handles the title role well, playing the colorful, theatrical Lettice with a brittle nervousness that gradually wins one over, as the frailty of the lonely older woman is revealed behind the ostensibly winsome, at times shrill theatrics. Jennifer Underwood's easy confidence onstage as the prosaic and conservative Charlotte is a pleasure to watch, and she provides an excellent balance, a solid counterpoint to the rather vivacious charm of Oliver's characterization. The first act seemed to suffer a little from opening-night awkwardness, and some of the comedic sparkle was dulled by a leaden tempo, a hesitancy that can be especially fatal to sharp British humor, but while it took them a while to find their stride, by the amusing conclusion of the first act, the two leads were in fine form, and the rest of the play flowed engagingly on the easy rapport between them.

The great pleasure of this play is the script and its abundance of excruciatingly articulate British wit. Lettice's distinctive brand of overblown, archaic conversation produces some absolutely delicious bursts of comedic verbiage, and by the time the plot twists itself into total absurdity in the third act, it is pretty much impossible not to be entertained. At times, this celebration of British eccentricity veers just a bit toward the mawkish – a common enough pitfall for stories of whimsical, flamboyant characters given to expounding philosophies of life such as, "Enlarge, enliven, and enlighten!" as Lettice proclaims. The sharpness of the dialogue, however, and the straightforward funniness of the climactic plot device conspire to make this overall an enjoyable and entertaining evening of theatre.