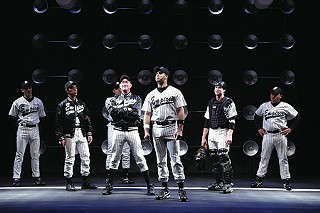 Darren Lemming may wear the pinstripes of his team, the Empires, but you can tell at a glance that he considers himself a man apart. He has that cocksure stance of the athlete who knows what a supreme physical specimen he is and the cool, self-satisfied smile that says there's nothing you can throw at me that I can't hit – and not just hit but smash clear out of the park. He has the aura of one for whom mortal laws of physics simply do not apply. He knows that he is, as Michael Jordan was and Tiger Woods is, a paragon of his chosen sport, one of a kind. So it didn't seem to this god among men any big deal that he should reveal a personal fact about his life to the press one day. He was only talking about himself, after all, so why would it affect anyone else? But Darren's revelation about his "true nature" – that he's gay – sets in motion a chain reaction of disruptions: among his teammates, among fans, among friends. Prejudices that had been hidden, like Darren's homosexuality, suddenly surface, revealing the "true nature" of those around him, people whose fears or religious beliefs or just deeply ingrained hatred have bred in them a bigotry toward gay people. And so this man who holds himself apart, who keeps a deitylike distance from even those men who belong to his own team, is forced to deal with people and the messiness of being human.

Jody Reynard's deftly shaded turn as Darren is central to our understanding of Richard Greenberg's Take Me Out as produced by the Zachary Scott Theatre Center; that purposeful aloofness allows us to see what the character is blind to: how his actions affect others. But while Reynard may project the 'tude of the superstar, his interaction with his co-stars makes it clear this actor knows that theatre, like baseball, is a team sport. He plays well off others, most notably John Rochette, who plays Kippy, arguably the brainiest shortstop in the history of the game and the one teammate of Darren's who can claim friendship with him. Rochette boasts an open, amiable grin and easygoing charm that contrasts nicely with Reynard's reserve – a warmth to Darren's coolness – and you can sense how they complete each other; their scenes together have that satisfyingly smooth snap of a neatly turned double play.

But to be fair, that sense of team play extends across the 11-man cast. Although the actors come from diverse backgrounds and few have worked together, director Dave Steakley has coached them into an ensemble of admirable unity, in both how they tell the story and how they convey a sense of men whose job is a game that requires them to function as a unit. Like the players themselves, each actor knows his role and what he has to contribute when, whether it's Micah Sudduth, ebullient as the Empires' dim-bulb catcher; Tom Green, firm as the team's paternal coach; Zach Thompson, scary as Shane Mungitt, a monstrously gifted pitcher from the sticks with a monstrous core of rage blazing inside him; or Marc Pouhé, first affable, then fiery as Darren's best bud, a pious player for a rival team who turns on his friend after learning of his "true nature." Everyone delivers fine work individually, but it's the group effort, that interplay of ensemble, that makes the whole thing click.

If one cast member stands out, it's by design more than anything. Greenberg created one character who isn't on a baseball team: Mason, a financial adviser charged with managing Darren's portfolio and a gay man who sees Darren's coming out as a heroic act. But his true purpose is to serve as mediator between the audience and the game of baseball, to explain it to those who don't know the game and rhapsodize about it to those who do. Greenberg has Mason address us directly and speak in the passionate terms of the new convert, giddy with devotion. It's a smart device and an engaging one, especially when delivered by the likes of Martin Burke, an actor of enormous appeal who, in Mason's soliloquies, attains a state of euphoria – his face as bright as the grid of stadium lights that designers Michael Raiford and Jason Amato use to back the set – that's infectious. Through his eyes, we see baseball in all its symmetry and beauty, how the game can take you out of yourself and what it can mean, as a metaphor for democracy and life.

It's possible that this story could be told in another sport – certainly Tim Hardaway's homophobic rant this year proves its timeliness for basketball – but in no other game do you get that tension between the individual and the group as in baseball, where in every inning, players must stand apart from their team and face the opposing side alone. That leads us to glorify, even deify, those single players – batters and pitchers – who thrive in that duel at the plate. But Take Me Out powerfully reminds us that no individual's action is without ramifications for the team. We're all connected, all playing together. No man is an island – or a home plate – entire of itself.