The late Luis Jiménez created art on a grand scale – and lived his life that way, too 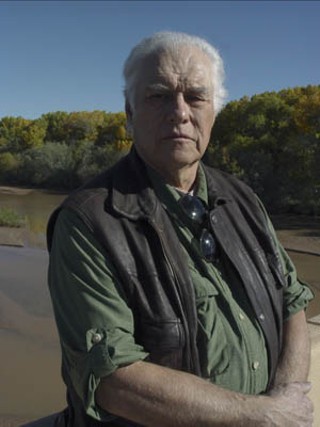 Portrait of Jiménez by Delilah Montoya

"Small" is not a word typically associated with Luis Jiménez. The El Paso native created art on a grand scale, constructing vibrantly colored fiberglass sculptures of Aztec warriors and working-class immigrants, vaqueros and wild horses, which were truly monumental – 10 feet tall, 25 feet, more. The Mustang that he was working on at the time of his death in June of 2006 – that literally killed him, tragically enough – was 32 feet tall. And the controversies that these works regularly engendered were, more often than not, of like size. Throughout his four-decade career, Jiménez was embroiled in extremely heated wrangles over his choice of materials (fiberglass being too lowbrow for high art), his choice of subjects (poor immigrants and Aztecs not being Western enough for Western art), and his depiction of his own people (reinforcing negative stereotypes of Latinos). The artist was able not only to defend himself against such charges but frequently to win over his critics because he had a smile and a heart at least as big as his sculptures. Among those who knew him, Jiménez is remembered almost as much for his outsized generosity and good cheer – to fellow artists, to students, to neighbors, to nonprofits – as for his artwork. The only time you're likely to find the word "small" applied to the man is in regard to the size of his ego.

When someone has left such a massive impression on the art world – and the world in general – it's only natural that people would want to honor the person. Thus, Texas Folklife Resources, which was on the receiving end of Jiménez's generosity in what turned out to be the final months of his life, is hosting a program to discuss Jiménez's life and creative legacy. (See "Luis Jiménez: The Texas Folklife Resources Tribute." This event was originally to have been presented in January but was rescheduled when the city was shut down by icy weather.) In the spirit of this program, the Chronicle offers its own introduction to this creative giant. 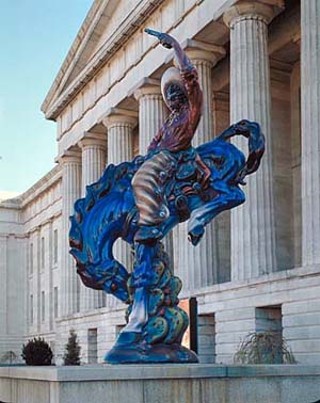 Vaquero outside the Smithsonian Museum of American Art, Washington, D.C.

To understand Jiménez as an artist, it helps to know his beginnings. He came into the world midway through 1940 and deep into an El Paso summer (so you can just imagine what that labor was like). His father, a Mexican immigrant who had crossed the Rio Grande with his mother some 16 years earlier, owned a custom electric and neon-sign shop, where he made "big, over-the-top neon hotel signs with giant vaqueros and all the clichés of the Southwest," according to Stephen Fleming, an old friend of Jiménez's and the director of the Roswell Artist-in-Residence Program. That was where the young Luis, who worked in the shop from the time he was 6 years old all the way through high school, learned to paint and fashion large works out of metal, and the imagery he saw there – the Hispanic cowboys and Mexican calendar maidens and such – came to inform his own artistic work. He was also deeply affected by his exposure to the work of Mexican muralists, such as Diego Rivera and José Clemente Orozco, on visits the family made to his parents' homeland.

Despite his early leanings toward art, Jiménez majored in architecture when he enrolled in the University of Texas at Austin in 1960 (a decision influenced by his business-minded father). But he also took art classes and eventually made the switch to fine art, earning a bachelor's degree in 1964. That time at UT constituted a true turning point for Jiménez. "Had I not gone to Austin," he said in a 1998 interview, "I would never have had the kind of exposure to the world that I ended up having."

Following a brief time in Mexico City and frustrating periods back in El Paso (where he was recovering from a broken back) and Austin, Jiménez took off for New York. He suffered through lean years there as well, supporting himself for much of the time by working in a federal program for minority youth, but he did land a job as studio assistant to sculptor Seymour Lipton and eventually secured a solo show at the Graham Gallery. 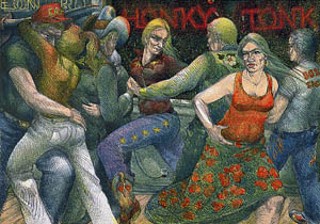 That show really opened the door for Jiménez into the art world, but even though he enjoyed his first professional successes as a result, neither New York nor the gallery life were where Jiménez wanted to be. He didn't care for the city itself or, as he put it in a later interview, "the limited audience that museums and galleries attracted," so in 1972, when he received an offer to come to Roswell, N.M., and be a fellow in an artist residency program, Jiménez took it. Back home in the Southwest, he fully embraced its culture and images for his art. Native Americans hunting buffalo, rodeo queens, farmers at the plow, Mexicans crossing the border, honky-tonks, vaqueros – these became his subjects, rendered larger than life and in the boldest of hues. And he saw to it that they weren't relegated to the exclusive showplaces of the art-world elite but were placed in public spaces, where the people whose lives and culture they were celebrating could appreciate them and, indeed, make them part of their lives.

Jiménez's pursuit of this egalitarian ideal didn't always come easily. Many of his works were fiercely resisted, such as his most familiar work, the 1980s sculpture Vaquero, one version of which lives in Houston's Moody Park and another of which stood outside the Smithsonian American Art Museum in Washington, D.C., for many years. Initially, it was slammed for its glorification of violence and of a negative stereotype, that of the wild Mexican with a gun. Jiménez took pains to explain that the statue was actually a celebration of the original cowboy, as he came from Mexico, and thus an effort to reclaim that part of Mexican-American heritage. The gun was included as a nod to the tradition of the equestrian statue, which always depicts its human subject with a weapon. "No one would dream of taking away Robert E. Lee's gun or George Washington's sword," he once said, "but somehow the thought of a Mexican with a gun is seen as a big threat."

Typically, the controversies were eventually defused, and Jiménez's work was embraced by the public that he considered his true audience. Vaquero became a popular greeter for visitors to the Smithsonian (it was reinstalled shortly after Jiménez's death), and Southwest Pieta, a large sculpture at Longfellow Park in Albuquerque, N.M., that combines Christian imagery with Aztec mythology in a way that originally made some folks uncomfortable, was later declared a national treasure. 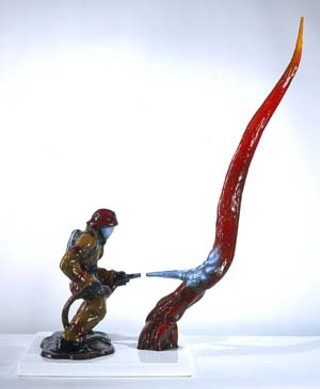 Firefighter from the Blanton Museum of Art

While Jiménez more or less turned away from the art world, it continued to recognize him and the importance of his work. It has been displayed at the Museum of Modern Art and included in the Whitney Biennial in 1973 and 1991, and works of his have been purchased for the collections of the Metropolitan Museum of Art, the Rockefeller Foundation, the Art Institute of Chicago, and the Hirshhorn Museum, among others. His many honors include two fellowship grants from the National Endowment for the Arts, four NEA Art in Public Places commissions, a Skowhegan Sculpture Award in 1989, the New Mexico Governor's Award in 1993, the Texas Artist of the Year Award in 1998, and a Distinguished Alumnus Award from UT. In the 1990s, two major exhibitions of his works toured the country, "Luis Jimenez: Working Class Heroes: Images From a Popular Culture" and "Luis Jimenez: Man on Fire."

He continued to be much in demand right to the end. He had commissions for a sculpture honoring firefighters for the city of Cleveland and one of César Chávez for Houston, as well as the troubled Mustang he was creating for Denver. The statue, intended for the Denver International Airport, had been commissioned back in 1992 and was to be delivered four years later, but the colossal figure of the rearing horse proved to be much more complicated than expected, and it was still incomplete a full decade past the original deadline. But Jiménez appeared to be closing in on completion of the work in June last year. On the morning of the 13th, he was working on it again in his studio in Hondo, N.M., where he had made his home for many years. With the help of two employees, he was using a hoist to move the massive horse's hindquarters, but then it came loose and smashed into the artist's leg while he was straddling a beam, crushing it and slicing open the femoral artery. Although the Hondo Emergency Medical Services responded quickly, he had lost so much blood that he died before he reached the emergency room at Lincoln County Medical Center. He was just weeks away from his 66th birthday. One measure of his standing in New Mexico and his place in the hearts of its people is that the state's governor, Bill Richardson, ordered flags lowered to half-staff. In the back of the old truck Jiménez used to transport his sculptures, the artist was carried to a small canyon a few miles from his studio, where he was laid to rest in a hand-dug grave to Mexican folk songs played on a couple of guitars.

The unexpected death of Luis Jiménez shocked those who knew him, and the circumstances of his passing doubled the sense of loss. Even now, almost a year later, those who were close to him find it hard to believe that the man is gone. But as is always the case when these things happen, his work endures, and the giant footprints he left behind are still clear. After Jiménez's passing, James Moore, former director of the Albuquerque Museum, put it this way: "If there were a Michelangelo living in our time, in terms of talent and creativity, Luis was it."