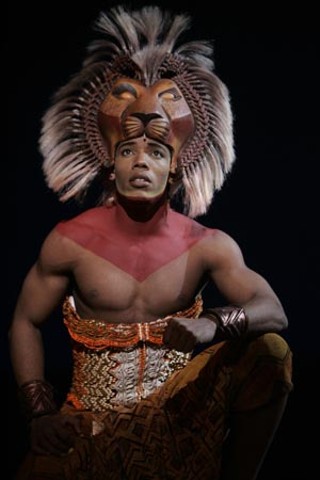 A young prince, blaming himself for the death of his father, abandons his homeland and royal birthright. In truth, however, the boy's uncle coveted the crown and murdered his brother for it. To rid himself of a rival, the villain convinces his nephew that the boy himself was responsible and should leave home forever. Years later, the prince, now grown to manhood, learns that his uncle has ruled the land into ruin and returns there to challenge the murderous deceiver and restore order.

Stripped of its cuddly anthropomorphism, studio script beats, pop-culture in-jokes, and Elton John-Tim Rice songs (not to mention that trademark Disney sheen), The Lion King sounds a whole lot like a good, old-fashioned myth, the kind of tale that traffics in archetypes and primal human experiences and that's been striking chords in people of all cultures since we first began huddling around campfires together. And watching the stage adaptation of the 1994 animated feature, it feels like director Julie Taymor was determined to treat the story like a true myth, one passed down through the generations of a particular culture rather than the concoction of a few screenwriters in Hollywood some 15 years ago. In bringing the work to the stage, she infused every aspect of it with the looks and sounds of Africa, from the color palette, suggestive of sun-kissed savannahs, dusty velds, and the hides of native animals, to the elaborate geometric patterns and beadwork adorning the fabrics that seem straight from an African market; from the use of masks and their distinctive stylized designs, recalling rituals as old as the continent itself, to the authentic chants and music by South African composer and vocalist Lebo M and the exhilarating group choreography of Garth Fagan that feel as if they were drawn from some traditional communal ceremony. And by employing so many of theatre's oldest techniques in the telling of the tale – masks, shadow puppets, Bunraku puppetry – Taymor immersed the story (and, ultimately, us) more deeply in that sense of ancient tradition. Here, we feel about as close to a legend of old Africa as one can while watching a big-budget Broadway musical.

And make no mistake, The Lion King is a big-budget Broadway musical – among the biggest, utilizing state-of-the-art technology and made possible only by the tremendous resources of a most commerce-savvy multinational corporation. That can be seen not only in the designs of the comic characters, which duplicate their appearance in the cartoon, but in the performances of them, which hew closely to the vocal work for those creatures in the film. It's a packaging move, guaranteeing the movie experience in the play, and it reminds you that, all the creativity onstage notwithstanding, this show is very much a Disney product. Still, despite the constraints of having to base one's performance on Rowan Atkinson's or Nathan Lane's, as Timothy McGeever and Damian Baldet must here, the actors make their characterizations feel delightfully fresh; McGeever's Zazu is one sly old bird, at once harrumphingly stuffy and witheringly droll, and Baldet's Timon is a classic wise guy: driven by self-interest, given to plain talk, and able to size up any situation in a smartass one-liner. And the fact that these two actors create such full characters while manipulating complex puppet armatures makes their work all the more impressive.

The same may be said of the company as a whole: No matter how complicated their task, be it walking on stilts as a life-sized giraffe or dancing in a pride of lionesses or providing percussion on the sides of the stage, the performers accomplish it with skill and with a fullness of spirit that makes every performance feel as if it might be the first. Wallace Smith brings enough energy to the grown Simba to light the whole show, and as the grown Nala, Ta'Rea Campbell fills "Shadowland" with such urgency as to make it a potent dramatic statement as well as a lovely ballad. Powered by this kind of work on top of Taymor's visionary interpretation, the show soars on an uplifting freshness. From the moment Gugwana Dlamini, as Rafiki, brightly belts out Tsidii Le Loka's chant, calling forth that spectacular promenade of creatures about which so much has been written, this production of The Lion King brings us charmingly, thrillingly, into its "Circle of Life."