Tennessee Williams' The Glass Menagerie may have been done to death, but the strong cast of the Austin Shakespeare Festival production makes this masterpiece come alive again

Don't be fooled by the name; the Austin Shakespeare Festival is not exclusively about the Bard. The many skills this company has honed in its 23 years of performing Shakespeare make a graceful leap to classic 20th century American theatre. Whether it is the iambic pentameter of Elizabethan England or the poetic lyricism of Tennessee Williams' South, the cast of ASF makes the words breathe life, no matter how many times you may have heard them before.

In ASF's production of The Glass Menagerie, the pace and emotion are strong from the narrator's first address. Guy Roberts' Tom swaggers in from behind the audience to tell us about his "memory" play and bring us into this fragile, painful world. He first introduces us to his mother, Amanda, one of Williams' enchanting but deluded aging Southern belles. Tom speaks of Laura, his pathologically shy sister who lives in a world of glass figurines. And we first hear about the Gentleman Caller: "He is the most realistic character in the play, being an emissary from a world we were somehow set apart from. But since I have a poet's weakness for symbols, I am using this character also as a symbol; he is the long-delayed but always expected something that we live for." Roberts' delivery of these famous lines – punctuated with pause and gravitas – can make you shudder. (Hint: If you want to feel like you, too, are in the drama, sit by the middle aisle stairwell; some of the best moments in the play happen here, and the intimacy is almost embarrassing.)

Ah, yes, the promise of the Gentleman Caller: Amanda's fast track to happiness for her daughter and herself. ("Girls that aren't cut out for business careers usually wind up married to some nice man," she says.) Ouch. This play is so depressing, you may wonder why you are willing to sit through two hours of it. (Williams himself said it was the saddest play he'd ever written.) Well, you stay seated because the writing is so poetic and the characters are so masterfully complex. And in the case of this particular production, you stay because the actors are so convincing, particularly Patricia Pearcy, who plays Amanda. When she slips into one of her wistful reveries of her days in the Delta, with jonquils and the planter's sons who courted her, you want to embrace her. (Her Southern accent is just right – not overdone, although she manages to make "planter" a three-syllable word.) And when she ruthlessly nags her poor children, you want to wring her neck. Her voice lilts with nostalgia, and then she prattles like an old hen. She beguiles and vexes, attracts and repels, without missing a beat.

The relationship between mother and daughter – one of the most famous and pitiful in American literature – is performed like an awkward dance. Amanda and Laura try to be close, back away, and then seek to comfort each other again. You could spend the entirety of this show just watching the women's hands. Pearcy's delicate hands mesmerize at they flutter to her neck, reach for Laura, strike at the air, or rest on her thin hips. Conversely, her nervous daughter, played by Sarah Johnson, wrings her fingers so compulsively that you want to grab them and hold them still. And when Amanda takes Laura out on the fire escape to have her wish for happiness by the moon, the actors convince: Despite all of her moaning and misplaced efforts, Amanda, like any good mom, just wants her daughter to be happy.

It may be the saddest play that Tennessee Williams ever wrote, but it's a play worth revisiting, no matter how often you may have read it in school. To see it in the intimate space of the Austin Playhouse with a strong cast of theatre veterans makes this masterpiece come alive. 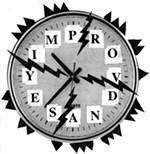 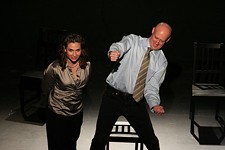