Rarely has Austin seen a play or production with as much of a social conscience as Naomi Wallace's Slaughter City, as staged by the UT Department of Theatre & Dance 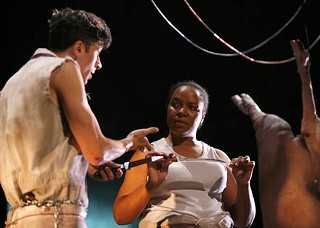 B. Iden Payne Theatre, through March 9

Titles of plays are interesting things. The best of them do more than simply encapsulate a story; they are metaphorical, implying multiplicity of meaning and expanding outward once the story itself has been experienced.

Such is the case with Naomi Wallace's Slaughter City, produced by the UT Department of Theatre & Dance. The action occurs in a slaughterhouse. On the back wall of the B. Iden Payne Theatre stage, what appear to be vents are exposed, and in front of them scenic designer Sarah Davidson has constructed an intimidating abattoir of thin, metallic vertical and horizontal lines. Huge screens are shifted about, enclosing and opening the massive space, and occasionally processing lines drop down, on which are often hung huge, swinging carcasses of swine. At other times the stage becomes an office, a locker room, a cafeteria. Sometimes tables are brought in, and meat is butchered. All of this is accompanied by designer Billy Henry's mechanized soundscape of chains, conveyors, horns. Though the cast only numbers 12, director Corey Atkins stages the scenes so as to imply a huge crowd of actors stomping about, and as the set changes occur, the actors march, chant, sharpen knives, and pound things on the floor – I cannot recall ever seeing a production in which the scene changes are as stimulating as the ones you'll see here.

In a way, that's a shame, because more often than not, what's happening during the scenes doesn't match the power and ingenuity of what's happening between them. This is the second Wallace play I've seen, and while I deeply sympathize with her politics, I find her plays to be somewhat opaque. Strange, seemingly inexplicable things sometimes happen. A man gradually becomes an animal. To gain the love of an older black woman, a young white man has to put on a dress and pluck a knife from between her teeth. While much of the production's action appears to occur in the present, two of the characters seem out of time, born a century or more beforehand. This fact might have been stated early on, and I missed it, but I don't think so. It's a gradual awakening, the past becoming the present, the workers realizing their power, and that power igniting them in protest, the fire that burned a hundred years ago burning us all in the here and now.

Only rarely have I seen a play or production with as much of a social conscience. There's a display of quotes and photographs in the lobby, and you're invited to add to it. Afterward, you're offered a slip of paper and encouraged to become an activist. Mine said, "Take Five Minutes to Make Your Voice Be Heard," and offered ways to do it. But what can be heard above our modern cacophony of sound? What can be seen in the heavens when we are blinded by the nuclear lights that hide the vestiges of primordial night? Cities are the bane and the backbone of every civilization. We feed them the world, yet they never cease demanding satisfaction, and in the end, on the killing floor of what we call culture, what is slaughtered is our very humanity.