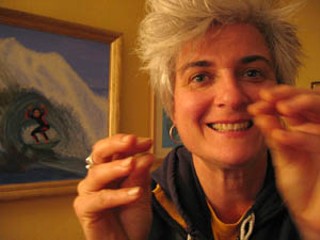 Gretchen Phillips remembers a time when Austin had a lesbian theatre company, and she's worried that theatre by gay women has been decreasing. This week, the acclaimed singer-songwriter from Two Nice Girls and Girls in the Nose does her bit for queer theatre by launching season four of Throws Like a Girl, the Rude Mechanicals' annual series celebrating women performers. This year's edition rocks, literally, with Phillips being followed by Tribe 8 singer/lyricist Lynn Breedlove in week two and Bitch, of queercore duo Bitch & Animal, in week three. Phillips talked with the Chronicle about the shifts from clubs to theatres and bands to solo act.

Gretchen Phillips: It's very cool to think about how to present my solo show that I've been doing in clubs in a new way. I want to use the things that theatre offers that clubs don't in terms of lighting, props, you know. When I play at the Cactus, there's no one asking me, "Well, what are your thoughts about costumes?" So it's very cool to have these new collaborations at Rude Mechs. For people who have come to see me at Hole in the Wall or Flipnotics or the Cactus, this will be a different show.

GP: My solo show consists of me reading a little story, singing a little song, reading a little story, singing a little song – going back and forth between narrative memoir or ruminations on current events and my music. I can't just sing, sing, sing one song after another like most solo artists. It's too emotionally taxing for me. My stuff can be kind of heavy. It's leavened by the funny stuff, but it's just too much. And the stories allow [me] to talk about something that just happened. It takes me longer to write a song about something that just happened, but with this, I don't have to rely on stage patter or something clever that I make up on the spot. It's very cool.

AC: Did you bring in this year's other artists?

GP: [The Rude Mechs] asked me [for suggestions], and of the two people I suggested, they said they loved them. Lynnie's West Coast, Bitch is East Coast, and I'm Texas. We're in the same circles, and we've known each other for many, many years. The solo thing is actually new for all of us. Lynnie was in Tribe 8, which was like a lesbian punk band with thrash undertones. Then Bitch was in Bitch & Animal, and that was a duo. And I have always been in bands. So it's interesting that we find ourselves doing solo performance now.

GP: Politics. Humor. Passion. A lesbian point of view is always going to be an interesting one, culturally, I think. There are all sorts of ways in which we are oppressed and hurt that are shitty and hard. But there are all sorts of things that we're not engaged in that mean that we can see what that crazy heterosexual dance is that people take for granted as just how it is. And we see no, that's not actually how it is; it's not how it has to be. I wish – and I think we all wish – for a world that encompasses everything, where we don't have to feel like weirdos or freaks or that we're too much. There's this shared desire for a worldwide change that involves – and it sounds really cliché, but it's true – understanding that people are different. Being interested in people who are different. Trying to see things from different points of view. Because that's actually interesting. That is something I love very much about their work, that they are very politically minded. And you know, funny as hell. And that's important to me. They are that.

Throws Like a Girl opens with Gretchen Phillips performing Feb. 8-10, Thursday-Saturday, 8pm, at the Off Center, 2211-A Hidalgo. For more information, call 476-RUDE or visit www.rudemechs.com.