Austin Lyric Opera's American premiere of Waiting for the Barbarians speaks powerfully to life in a time of terror and oppression, sounding a wake-up call to our humanity 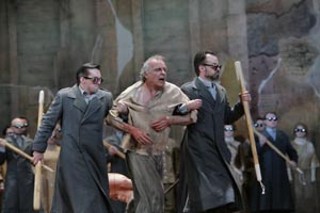 Eight bodies wrapped in fabric and bound to poles suspended high above the stage. We can't see who they are or might have been – can't even be certain they are human – but as they hang there in space, their still, shrouded forms give the appearance of outcasts dealt with brutally by some fearsome power: possibly tortured, very likely dispatched without mercy, most certainly displayed in this macabre manner as an example to others. As these mysterious figures tease us with visions of intimidation and cruelty, music rises through the hall, a pulsing, insistent music that quickens the heart and suggests we brace ourselves for … something, some as yet unspecified menace headed our way. It plays on, forcefully, wrapping us in winding sheets of tension as taut as those over the stage.

From the outset, Waiting for the Barbarians, the new opera by Philip Glass making its American premiere in Austin, establishes an atmosphere of suspense and impending violence that thrusts us deeply into its world of imperialism, oppression, and terror. In a remote, dusty village, we feel the dread occasioned by the arrival of a military force; representatives of an unnamed empire come to investigate attacks by "barbarians" – its dismissive term for nomadic tribes that inhabit the frontier beyond the empire's reach. And as the empire pursues what one character chillingly calls "a short, sharp war to safeguard the peace," with the military ruthlessly rooting out barbarians and their allies in the town by any means necessary – any means – we grow increasingly appalled at this occupying force's own campaign of terror and transparent attempts to justify it. As in: "Normally we wouldn't approve of torture. But I think it's widely understood that this is an emergency."

That's the kind of phrase that one almost cannot hear without the specter of our current administration rising from the stage. But while there are moments where the war in Iraq is pointedly evoked by Christopher Hampton (whose libretto is a marvel of economy in establishing character and dramatic conflict) and by director Guy Montavon (who also staged the work's world premiere in Erfurt, Germany, and has a striking feel for its power and emotional scope), both the work itself and this Austin Lyric Opera production are less concerned with scoring political points than with the struggle between any brutish, dehumanizing force and an individual's sense of justice and right.

At the heart of the work, as in the source novel by UT alumnus J.M. Coetzee, is the town magistrate, a man whose comfortable existence presiding over life in this sleepy outpost is upended by these events. The opera is his journey out of complacency through compassion, his own degradation and humiliation, and outrage to a place of moral reawakening. It's a remarkable role, and Richard Salter, who's required to be onstage for almost the entirety of the opera, fills it remarkably, anchoring the work with an expansive humanity. It beams in contrast to Eugene Perry's steely, intimidating Col. Joll and Wilbur Pauley's booming automaton of an officer, who, with their stiff-backed postures and eyes hidden behind mirrored shades, seem more machine than man. But it's never more clear than in the magistrate's scenes with the "barbarian" girl – an alternately vulnerable and tough Adriana Zabala – especially as Salter expresses a sense of being overwhelmed by the sight of her bruised and ravaged body and then great tenderness as he bathes her.

For all the tension and violence of it, Waiting for the Barbarians is also a work of captivating beauty. George Tsypin's set – a series of painted scrims that rise out of and sink into the stage – combine with Thomas Hase's lights to create stunning vistas: sun-drenched desertscapes and miniature mountain ranges out of a dream. For his part, conductor Richard Buckley – the man we can thank for Austin getting this work so soon – draws not only the pumping turmoil out of Glass' circling arpeggios but also the warmth and color, the lyricism, of those sorrowful minor chords and winding, climbing phrases. He captures the pulse and the human heart responsible for it, and this is nothing if not a work about recovering one's humanity.

And this is nothing if not a time in which we need a call to recover our humanity. It's so easy to be so overwhelmed by the terror surrounding us that we retreat behind mirrored shades or remove ourselves to a distant outpost far from the screaming. As with its staging of Jake Heggie's Dead Man Walking in 2003, ALO's courageous production of Waiting for the Barbarians reminds us that opera is not some dusty relic of culture past but a vibrant art form that can – and does – speak with genuine power to contemporary lives. At one point in this opera, the magistrate says, "I can no longer live the life I was used to." Can any of us?