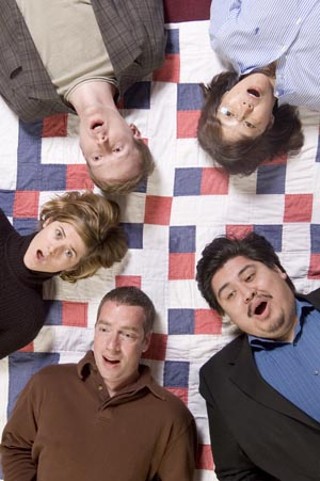 Hey, Walt Whitman, you crowed about how you could hear America singing, but you never bothered to name that tune. What were those "varied carols" being sung by the mechanics and masons and mothers and deckhands and hatters and seamstresses and all? Appalachian folk songs? Shaker hymns? A few of Stephen Foster's greatest hits, mayhap? Or – and I know this is after your time, but still ... – some standards by the Gershwin brothers or Mr. "God Bless America" himself, Irving Berlin?

What I'm getting at here is: What makes an American song American? What's the sound that belongs uniquely to our country? Is it something found only in musical forms that were planted and sprouted here, like, say, spirituals, ragtime, jazz, soul, rock & roll? What about certain composers and songwriters whose work seems ineffably to capture in melody the land of the free and home of the brave? I'm thinking of folks such as Aaron Copland, John Philip Sousa, Woody Guthrie, Scott Joplin.

And Walt, your Americans were all singing their separate songs, but what does it mean when people in this country get together and sing, when they pool those voices into a mighty red, white, and blue chorus? Does it sound any different than one in Canada or South Africa or Spain? What is the state of the choir in America today?

These may not be questions on which the fate of the republic hangs, but their answers may still tell us something about who we are as a nation, about the unique ways in which we express ourselves and how that has evolved over our 400 years as a culture. At the very least, they'll make for some lively discussion in our town this weekend as hundreds of choristers gather here for what may well be the largest choral festival in the nation this year.

It's called Crossing the Divide: Exploring Influence and Finding Our Voice, and it's yet one more example of how Conspirare, the esteemed professional choir based in Austin, has developed into one of the leading vocal ensembles anywhere. Conspirare – whose name you might recall hearing around the time the Grammy nominations were announced, scoring a nod for its second CD, Requiem – We Are So Lightly Here, in the category of Choral Performance – is one of just seven choruses in the country that the National Endowment for the Arts chose to host a choral festival as part of an initiative called American Masterpieces. The idea is to support major projects centered on the nation's "cultural and artistic legacy." (Tapestry Dance Company and the Zachary Scott Theatre Center have also received major support through American Masterpieces, the former for its production of The Souls of Our Feet and the latter for an upcoming production of Porgy and Bess.) Conspirare had the idea of rooting around in the roots of America's choral music traditions, and the NEA liked the idea to the tune of $75,000 – the largest grant the federal agency made in the choral music category of the initiative. So now eight diverse choruses from around the state will be in Austin January 25-28 to perform separately and, on Sunday, in a 600-voice massed choir. In between and around the concerts will be workshops and forums that explore that "American voice" through its many varied musical traditions, as well as through the words of American poets. (Did you catch that, Walt? They hear America lyricizing!) 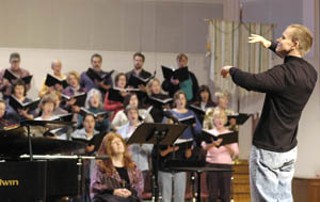 "And what do we mean by 'Crossing the Divide'?" asks Conspirare artistic director Craig Hella Johnson. "We're talking about a divide between performer and audience, a divide between composer and performer, and, beyond that, divides within our community: gender-based, political, social, geographic, religious. The name has become even more timely because so many things right now seem to be about separation and division. So music will be the springboard for these discussions, but I think that the conversations we'll have will expand out from that as well. And I'm hoping folks don't think this is just a seminar for choral musicians. I want people off the street, with no connection to choral music, to come and really be a part of this conversation. That's what's going to make this really special."

Driving Johnson's hope for broad community participation in the conference is his keen understanding of how essential singing is to human experience and how accessible it is. "There has always been a sense that singing is one of the deepest forms of human expression and perhaps one of the most direct and truest," he says. "A moan is only a few steps away from singing at times, and somehow we know that, and singing gives that moan a sense of jubilation or praise or more joy, expressed in a structure. Music brings a sense of connection to things larger than oneself, and a singing tradition really connects a person with that. A person that isn't trained on a violin can't step into an orchestra, but someone who can match a few pitches and have a human expression can enter and possibly sing a hymn in four parts.

"I think we long for connection," he continues. "We have a natural instinct to want to connect with one another, but singing kind of gets us there like that [snaps fingers], and people who sing together know that. And people who don't sing in choirs kind of see it and experience it sometimes. The [Conspirare] concerts that really get inside [people are the ones] where we've invited the audience to sing. And even if it's just eight bars in the program, I will be thanked as if I'd written a million-dollar check. It seems so basic and so obvious, and yet it's pretty profound. Whether it's professional or amateur, sacred or secular, choral music at every level is this quite remarkable art form that inspires and meets us intellectually, socially, emotionally, spiritually. You're using your breath, you're using your mind, using your heart."

This communal mindset that comes from America singing together is one of the ways in which we cross those divides of politics, religion, region, and the rest, observes the Minnesota native. "I think that American choral music is particularly grounded in the ideas of community and fellowship and that understanding of the whole being greater than the sum of our parts. Those things may also be true in the orchestral experience, but we find in the choral medium a real conscious articulation of that."

That's not to say these qualities are unique to the U.S. of A., Johnson notes. "You go to Germany, and choirs have the same sense of bonding as something that choral music does, as one shares that direct connection with another's breath. It's always been part of the art form. But in America, we especially find this to be true. And I find that to be true with Conspirare. We formed a professional choir, and so one has a sense immediately of, 'Oh, they're professional singers, so they'll have that mentality of not engaging that deeply with each other.' But it hasn't been the case. They bring those values back from their childhood choirs and high school choirs. 'We want to make music together.'"

This sense of unity is part of what makes Conspirare such a fitting company to be leading this investigation into our national voice. Its membership covers both sexes, a broad span of ages and distinctly different backgrounds, not to mention several out-of-state addresses, but that all melts away when these singers open their mouths to make music together. It doesn't matter what the piece is – and oh, Conspirare's repertoire is marvelously eclectic, embracing in what one might call an American, yea, a Whitmanesque expansiveness, everything from medieval chant to Annie Lennox, Finnish anthems to gospel hymns to Lerner and Loewe – the voices blend seamlessly into this astoundingly pure single sound. Truly, out of the many, one. 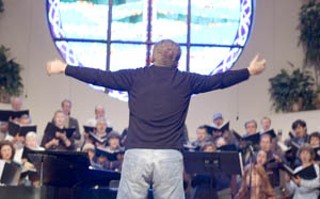 Though he isn't one to claim all or even most of the credit for his company's successes, you can ascribe a good part of Conspirare's unity to Johnson, about whom singer Cynthia Clawson says, "I don't know any director who is as in tune with his choir as Craig is." He founded the ensemble as the New Texas Festival in 1991, then in 1999 switched its name to the current one, the better to reflect that heart of the choir's music-making mission; it literally means, "to breathe together." From the podium Johnson takes pains to emphasize that spirit of togetherness. "I encourage singers to share the vowel, to share the pitch, to share the dynamic, to share the musical intention, and to sing it at the same time," he says, and, most of all, to "listening for a shared pulse."

And again and again and again, Conspirare's singers find it, to the amazement and delight of many – not least of whom are the choir's local fans, who are among the most devoted audiences of all the performing arts groups in the city. These folks don't just lean back and soak all this music in. They engage with it. You can all but see their ears curl forward when the voices take off, what Johnson refers to as "deep listening."

But increasingly, Conspirare is finding admirers across the land. In 2005, Chorus America presented the ensemble with the Magaret Hillis Award for Choral Excellence, the first Texas ensemble to be so honored. In 2006, Conspirare was featured in the PBS documentary The Mystery of Love, which focused on its methods of working together in a segment titled "The Communal Heart." And did I mention the Grammy nominations? One for Best Engineered Album, Classical to engineer John Newton and one for Best Choral Performance for the CD, Requiem – We Are So Lightly Here. And by the way, more than 80 recordings from around the world were submitted in that category, and not only was Conspirare one of just five that got the nomination, it was the only American choral ensemble to be so honored this year.

And, of course, there was that hefty endorsement from the NEA for this weekend's conference. It won't be the last word on American music – "We don't plan to come up with any answers. There won't be a summary statement at the end," Johnson insists – but the conversation will be sparked. And some inspiring music will be made.

We'll give the last word here back to the Good Gray Poet. In his 1860 version of "I Hear America Singing," Whitman included these lines, which could serve as an injunction to everyone who joins in Crossing the Divide this weekend and all such future endeavors:

"Come! Some of you! Still be flooding The States with hundreds and thousands of mouth-songs, fit for The States only."