Vortex Repertory Company's latest production, about those weaselly mythological misfits who pull pranks and break rules, Trickster, is an extravaganza 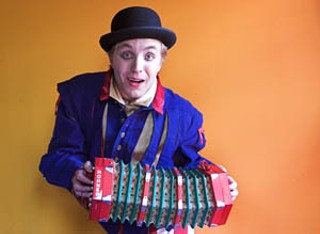 The Vortex, through Feb. 10

"Extravaganza" is the word that comes to mind for the Vortex Repertory Company's latest production. Aside from the fact that it's just fun to say, "extravaganza" is defined as a musical or dramatic work with a plot structure that's a bit shaky, a theme that's a bit sardonic or even burlesque, and staging and costumes that are very elaborate. Bonnie Cullum's concept of those weaselly mythological misfits who pull pranks and break rules, Trickster, is an extravaganza.

Usually in this kind of Vortex production, you are greeted by the characters as soon as the house opens. Here, instead of a being welcomed by a goddess enveloped with incense, you enter what feels like a jungle gym full of tricksters – characters bouncing about the place getting themselves twisted in aerial straps. All the tricksters have met here where there are no geographical or epochal boundaries, with pranksters from Africa, Asia, North America, and the Caribbean, as well as a popular Norse deity and a medieval jester.

The Raven, a woman all in black with feathers coiffed in her hair like Billie Holiday, perches on a swing, cawing. The Kitsune, three women and a man wearing kimonos and fox ears, smell the hot chocolate you just served yourself in the lobby. The Coyote wears rags and has a black button nose and her hair teased into a 'fro. Sun Wukong, the Monkey King, who's dressed like a gypsy, comes out with his assistant, who performs a PG version of an old striptease with a hanky. Aside from a questionable scene with the baby Krishna, the show is family-friendly.

With Matt Hislope as the Fool, we can suffer fools gladly. Wearing his best jester getup, he jumps into the rock & roll enough to pull you out of your seat. Hislope takes the stage juggling knives or glass orbs while smiling and holding a conversation, playing several accordions, or riding a unicycle, all with a fixed state of glee plastered over his face with its natural joker's smile. While on an Oz-like journey with his four Kitsune, the Fool finds himself in the middle of a contest among the tricksters to see who is the trickiest. Each one recounts a legend of his or her past, displaying his or her anthropomorphic abilities and skill at disrupting the harmony of the forces of nature or simply conning others. For example, the Monkey King (Gabriel Maldonado), whose furtive glance gleams in bright gold and glittery make-up, twists deftly into the air in aerial straps. Katrina Ellsworth, the aerial choreographer, helped several of the actors including Anansi, the spider, played by Miriam Robinson Gould, who uses the straps to guide herself to her web.

Eric Schimel's choreography of the fight between the Monkey King and the Fool is a passionate and graceful dance. Content Love Knowles gets it right again with the musical direction of the show. At some points it's tribal rhythms; at others it's satirical (a Beatles song pokes fun at Cirque du Soleil). The a cappella singing from some is fun and obviously not cast totally on singing ability.

Ultimately, the contest veers to the Krishna, whose adult form is Steven Fay, all in blue and awesomely calm in the middle of the storm, and whose infant form is also a trickster. He bestows enlightenment on the Fool. Instead of a metaphysical question – "What is consciousness?" – the more apt question would be, "Are you paying attention?"