The Goat, or Who Is Sylvia?: Tragedy defined

With The Goat, or Who Is Sylvia?, playwright Edward Albee proves he is still able to shock us, move us, and create a true tragedy 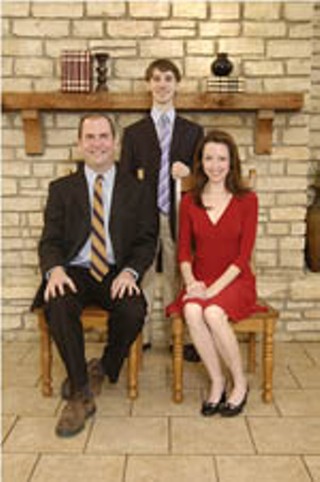 Don't think that the title of this Edward Albee work – which won the Tony Award for Best Play in 2002, probably should have won the Pulitzer, and is being produced locally by Different Stages at play! Theater – is really a title and a subtitle. The Goat, or Who Is Sylvia? is the title. The subtitle is Notes on a Definition of Tragedy, and few, if any, playwrights outside of Albee, the grandmaster of American playwrights, would even take on a word so freighted with dramatic baggage as the word "tragedy," a Greek word that translates as "goat song" and echoes back to the very beginnings of the art form we call theatre.

For the uninitiated, Albee is the holder of three Pulitzer Prizes for Drama – none of which, surprisingly, he won for what is now one of the watershed plays in American theatre, Who's Afraid of Virginia Woolf? – and the winner of two Tony Awards for Best Play. He fell out of critical favor for a long period of time during the late Seventies and into the Eighties before he made a roaring comeback with Three Tall Women, which won him his third Pulitzer. "Some critics tend to write people off," says Norman Blumensaadt, Different Stages' producing artistic director, who is helming this production, "and what happens to many artists in America happens to playwrights. If your first successful play is The Glass Menagerie or Death of a Salesman or Who's Afraid of Virginia Woolf? and you don't come back and write a comparable play again and again, the public perceives the writer as a failure. Writers, actors, and directors for the most part do not want to repeat themselves. Albee has followed his own path, and people didn't necessarily want to go there."

While the fact that Albee wrote the script is reason enough to pique one's interest, what's most interesting is that he has managed to do exactly what he intended: Write a tragedy. Some might not be able to get past the bare outline of the story, which concerns an architect at the height of his professional prowess, who has a perfect marriage and an adoring son but falls in love with a goat.

No joke. He falls in love with a goat. And again, it may be difficult for some, perhaps for many, to get past that singular fact, because whether you pronounce it with an "est" as in "best" or with an "east" as in "beast," in a world that often seems to have moved beyond shocking, bestiality still has the power to cow even the most jaded among us. What is perhaps most surprising is that bestiality is not even vaguely the most shocking thing in this strangely funny yet ultimately sad, sad story. I was moved beyond tears when I read it, and while that doesn't guarantee an effective production, I have difficulty imagining anyone unfamiliar with it being able to watch its ending and not be surprised, shocked, and ultimately moved beyond words. An Austin theatre luminary recently said to me that, really, Albee is tame compared with other playwrights writing today. He must not know The Goat, or Who Is Sylvia?, a truly great play and the quintessential American tragedy.

The Goat or, Who Is Sylvia?, Edward Albee, tragedy, Different Stages, Norman Blumensaadt