Portraits of the Artists as FronteraFest Regulars

Tweet
print
write a letter
Since 1993 the uniquely Austin event known as FronteraFest has been allowing anyone with an idea for a performance and the gumption to get it up on a stage several weeks at Hyde Park Theatre to do just that. Over 14 years, literally hundreds of writers, directors, and performers from Austin and beyond – the festival bills itself, and rightfully so, as the fringe theatre event in the Southwest – have taken advantage of that opportunity, but only a handful can qualify as FronteraFest regulars, those stalwart souls who come back year after year to pay their Short Fringe entry fee and take their chances. As FronteraFest 2007 gets under way (see full schedule, p.32), we present a handful of that handful, a small sampling of those who can't get enough of that Frontera-festive stuff.

Day job: Sales manager Years in a row at the festival: Four Short Fringe titles: "Six Years and 19 Days," "The Mommy Confessions," "More Mommy Confessions" How she started doing it: Since I was a little girl, I've always wanted to be an actor. But then I got married and I had kids, and things didn't quite work out like I thought they would. I didn't act for a long time when my kids were little because I couldn't; as a single parent, you just never have time. And when my kids were getting into the middle-school years, a group of my friends went in together for my birthday and paid for an acting class for me with C.K. McFarland. Which was just the most tremendous gift ever. Because the thing was, I realized my friends get me – they understand who I am and what's important to me – and for them to do that, I thought, was incredible. That's when I really started acting in Austin again. My dream was always to do a one-woman show, and my first attempt at that was almost three years ago. It was titled "Six Years and 19 Days," because that's how long I had gone without having sex. It was a huge accomplishment for me – the show, not the not having sex – because it's something I'd always wanted to do, but I didn't really know if I could do it. Why she loves it: The great thing about FronteraFest is you can take a chance, and I find that the audiences are very generous. They're honest with what they like and don't like. They're genuine. It's a very safe environment to get out there and try something. I just can't imagine not doing it now. What she's doing this year: "The Mommy Confessions: Final Installment" (Friday, Feb. 9)

Day job: High school teacher Years in a row at the festival: Five (but he skipped one) Short Fringe titles: "Leave It to Beverly," "Naturally Curly Hair," "Xenophobia" Why he does it: It's really fun. I'm engaged with all kinds of people from all over the community when I do it. You get to meet a lot of people. It's crazy, raw, immediate, put-it-out-there-and-see-what-happens kind of theatre, and that's really exciting. I love musical theatre, but there's a certain way in which musical theatre is not spontaneous, and you kind of know what you're getting. At FronteraFest, you never know who's going to be there, what's going to happen, what you're going to see, what you're going to feel, what you're going to experience. You feel alive while you're there. You're on this planet, and it feels good. His favorite part: I love the day when [production coordinator] Jennifer Hamilton orders a big box of hot cookies. You have to stay outside [at Hyde Park] unless it's right before your show is going on or there's room in the theatre, which there often isn't. It's the one month of the year when it's cold and wet in Austin. You have to be outside with a little space heater, so you need those warm cookies. But I like being outside because you get to warm up, and I mean literally warm up, with interesting people you don't know. What he's doing this year: A collaborative piece called "12:21." It's 12 short plays generated by a group of eight I'm working with, and the order is to be determined by the audience (Friday, Feb. 9). 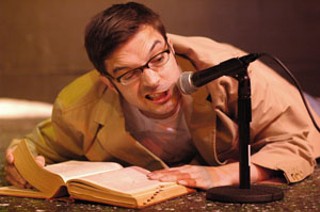 Cris Edwards performing "The Rubric"
Day job: Software marketer Years in a row at the festival: Five Short Fringe Titles: "Dossier of Pearls," "Coelacanth," "Terminals," "[nine]" How he got involved: I ran sound for the entire festival over five weeks in 1997, back when Vicky Boone was running the place. And I've dabbled in it off and on, and it's pretty much expected I'll do something now. Maybe reluctantly tolerated more than expected. My pieces have been weird. I don't really do typical plays. Most of the stuff I do is, I want to say, fairly improvised. I'm really bad at memorizing lines, so my plays have either been with prerecorded dialogue or improvised dialogue. They're usually about me. I use it as therapy, making fun of myself and my neuroses. Why he thinks it's special: It's an incredible forum for either experimentation or if you have something that's in progress and you want to try it out in front of an audience. FronteraFest audiences are the most forgiving people on the planet. When they go see something, they don't know what they're going to watch. They just know they're going to see five 20-minute somethings. So they're up for a crapshoot, and sometimes they're rewarded heavily, and sometimes maybe it's just something sort of intriguing that they'll forget about. But the audiences are great; the people who produce it really understand the urgency of the performance venue and the style of the festival. It's changed my perception of what performance is. What he's doing this year: A piece called "The Rubric." It will be a monologue about finding the underlying algorithm to my thoughts. Or something like that (Thursday, Jan. 18).

Day job: Market researcher Years in a row at the festival: Eight (but he skipped one) Short Fringe Titles: "Fugue for Five Waiters," "Treason by the Fax Machine," "The Number Cruncher," "Because of My Beautiful Spirit" Why he does it: It's fairly addicting. For me, the appeal is that it's a short period of time so that the production – setting up rehearsals and all the bureaucracy around that – isn't too enormous; it's sort of anyone can do it. There's not any selection process for entering, so you don't have to make any sort of a sales pitch. Maybe the most appealing factor is that it's got a built-in audience. I feel like, wow, I don't have to actually convince people to fill the seats; they kind of just do it automatically. And I really like the competition element. There is this feeling that you're trying to be the best in the bunch, and whether or not that's ultimately a good thing or not, it's sort of – there's nothing – I mean, they give you this call on a Friday night to let you know if they've decided to bring you back for Best of the Week, and it's a great feeling to get that call. It's such a great rush to go back and do it again. Why he'll continue to do it: It allows you to do experimental stuff. It gives you a lot of flexibility. The fact that it's sort of cheap to do and there's a built-in audience and anyone can do it, I feel like it's a great opportunity, especially for someone who is up-and-coming or people who haven't really taken off. What he's doing this year: "Brand Loyalty." It's about a focus group that starts mundanely enough but then takes some disturbing turns when a stranger shows up to ask a few provocative questions (Wednesday, Jan. 31). 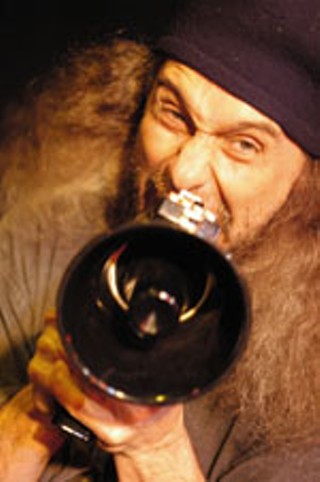 Hank Schwemmer performing "Spooky Actions at a Distance"
Day job: Master carpenter at the UT Performing Arts Center Years in a row at the festival: 11 Short Fringe Titles: "Begging Your Indulgence: A Tarot (of Sorts)," "My Dream Date With Laurie Anderson," "Alternate Routes to the Crossroads," "Corrupting the Monkey" On how he finds it indispensable: It gives me an excuse to write, and it gives me a deadline, and I don't need a company; I need 45 bucks and enough discipline to pull it together. I would like to consider myself in the company of writers. The heavy-hitters in town, the Steve Moores and the Dan Dietzes and the Cyndi Williamses and the Kirk Lynns, these guys are 24/7, and I bow to them, and I forgot the point that I was trying to make. Maybe it's that textbook example of neurosis: It's performing the same action a hundred times, figuring that the outcome's going to be different than the first 99. I've spoken with some writer friends about the difficulty that I have in putting these together – not to get too soul-searching about it, but it's been a long time since I've gone into one of these projects completely confident that, yes, I've got something that I want to say, bam, here we go. No, I go in thinking, "I might be able to come up with something." I think it keeps me humble, but by the same token I hope that, when my 8-year-old nephew opens up a coloring book back in Schwenksville, Pennsylvania, he doesn't have the same self-doubt that I have. I hope he just whips out the crayons and goes to town. On what he enjoys most: It's Kellogg's Variety Pack theatre, man. There's so much life. It is an anthill with this wonderful intelligence behind it. From Vicky Boone and now Ken [Webster, another of the Fest's producers] and Christi [Moore] and their respective production crews, there's something wonderful about the seething quality of it. And the marvelous fallibility of it all. There's something really exciting about going to a night of the Short Fringe knowing full well you're going to hate something, that one of them's going to be a complete dog, but being equally certain that something's going to kick your ass. The possibility of glorious failure. Yeah, I'll pay to see that. What he's doing this year: "Spooky Actions at a Distance." That phrase is what Einstein used to describe quantum theory. I think it's going to have something to do with the limits of metaphor, with my own personal crusade to reclaim the word "literally," and with the moon (Friday, Feb. 9).