1) The Assumption (Refraction Arts Project) A David Bowie-esque Hamlet who fights kung fu and a big-haired family that believes "We is kin" till death and dances Kabuki and can sing a Rilo Kiley cover. What wasn't there to love? 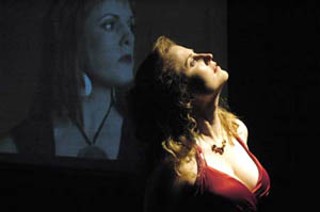 3) Decameron Day 7: REVENGE (Rude Mechanicals) After having a glass of wine and breaking bread on long Italian tables with the Rude Mechs, we were invited to write the names of our enemies (Heidi Klum) on a scrap of paper to be burned and sit and watch a dual soap opera onscreen and onstage.

4) A Human Interest Story (dirigo group) The audience sat inside the big boob tube, flipping through channels of disconcerting stories hyped in the media.

5) I Love My Dead Gay Son: The Musical! (Yellow Tape Construction Co.) This show was utterly generational, and I wish I had been in it, for the incredibly spontaneous cast or the amalgam of Eighties references like the coveted Jessie Spano on speed.

6) Kneeling Down at Noon (Mary Moody Northen Theatre) Not that I've seen a whole lot of theatre, but this was the only play that really put being a Muslim in the spotlight.

7) Not Clown (Physical Plant Theater) After coming home and nursing sore cheeks from watching clown-genocide, I wondered, "Did that really happen?"

8) Red Cans (Rubber Repertory) You should expect a company named Rubber Repertory to have people dress like red cans in their natural stomping ground. A double delight for those with SOD (Shoe Obsession Disorder).

9) Sodomy and Pedicures (Jessica Hedrick) Sex in the booty sparked this tour through the personal history of sexual cognizance for Austin ex-pat Jessica Hedrick.

10) We Are Normal, Cha Cha Chaaa (Yellow Tape Construction Co.) It wasn't just millions of down feathers in colorful lighting or Amanda Butterfield's kinetic choreography of a hip, all-female cast but Cari Palazzolo's movement-inspired pop that beamed throughout the show.