Top 10 Theatrical Treasures and Pleasures of 2006 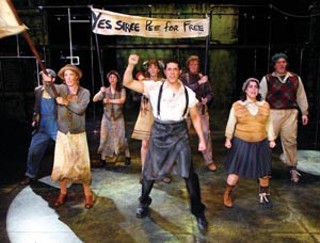 1) Urinetown: The Musical (Zachary Scott Theatre Center) This unlikeliest of Broadway hits – a parody of Thirties political musicals, laden with bad puns, musical theatre in-jokes, and that put-you-off-your-lunch title – landed in town with a mighty splash, thanks to director Dave Steakley and his polished production team, who not only got all its obscure jokes but served them up in a flood of high spirits and comic verve that left us breathless and giddy.

2) Decameron Day 7: REVENGE (Rude Mechanicals) While it toured the wide world of vengeance, portraying the settling of scores in ghost stories, soul-killing office jobs, Star Wars, and, most hilariously, the invented soap opera Harbor Cove, this Rudes premiere was wickedly entertaining. But ultimately the show was a call to forgiveness, a ceremony of mercy shared with bread, wine, a toast, and a flash of fire, making it the year's most generous and stirring production. 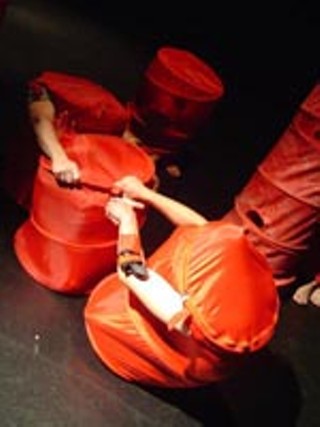 3) Red Cans (Rubber Repertory) As unsettling as it was to watch tiny red laundry hampers with human appendages – no heads, no legs, just arms or feet – this audacious production was absolutely absorbing, like a nature documentary from The Twilight Zone, in which we observed the social behavior and customs of these strange creatures: scuttling like crabs across the stage, stealing shoes, killing one another. Surreal, hilarious, and haunting.

4) Cymbeline (Spotlight Music Theatre Ensemble) Shakespeare's rarely produced, often derided romance got a shot in the arm from UT theatre student Dustin Wills, who pasted over its less-inspired text with better passages by the Bard and served it up under a starry spring sky in the School of Architecture courtyard. Inventively staged and energetically performed, this was Shakespearean enchantment.

5) (tie) Hamlet (Actors From the London Stage)/The Assumption (Refraction Arts) Two takes on the tragedy of the Danish prince, as different as night and day yet both theatrically daring and engrossing. The former presented the drama Shakespeare wrote but played by just five actors, whose grasp of the text gave even the most familiar speeches a fresh ring and who shifted between characters on the bare stage with an ease that was mesmerizing. The latter transported the play to a hillbilly holler at the end of the universe, improbably peopled by dudes in mullets and women in kimonos, all belting Seventies power ballads. But it was so thoroughly imagined and original (not to mention hysterical), the ride was exhilarating – and still amazingly true to Shakespeare's story.

6) Hairspray (UT Performing Arts Center) You can't stop the beat, boasts the signature song of this Broadway blockbuster, and you sure couldn't stop it when the national tour roared into Bass. From the opening blast of "Good Morning Baltimore," this staging of the feel-good musical drawn from John Waters' film raced along on the score's irresistible rhythms and the infectious energy of a couldn't-quit cast.

7) When Something Wonderful Ends (UT Department of Theatre & Dance) Recounting her quest for the moment our way of life began unraveling, playwright Sherry Kramer's remarkable monologue moved between 1963 and now, between Tehran and Springfield, Mo., between radicalized mullahs and vintage Barbies, to unearth truths about America's pursuit of Middle Eastern oil and her personal history, before arriving at her mother's grave and the intersection of geopolitical interests and individual responsibility. As timely as it was revealing and as witty as wise.

8) As You Like It (Austin Shakespeare Festival) Another Shakespeare, another small cast, another bare stage under a starry sky, another enchanting evening. Played with both cast and audience on the Zilker Theatre stage, ASF's show was buoyed by a freewheeling attitude among the eight actors, their palpable joy in the Bard's comedy and language, clever staging, and Ed Kliman's whimsical original score.

9) Where Are They Now? (Shrewd Productions) From the same New Zealand murder that inspired the film Heavenly Creatures, playwright Cyndi Williams mined her own fascinating drama: a psychologically complex charting of the crime's effects on the women who committed it, with the pair vividly portrayed by Shannon Grounds and T. Lynn Mikeska, and the tension between them ratcheted up in riveting fashion. 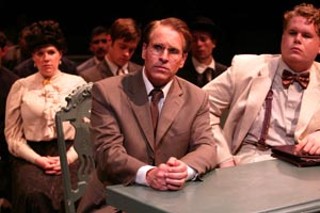 10) (tie) Parade (Mary Moody Northen Theatre)/I Am My Own Wife (Zachary Scott Theatre Center) Two shows that made history come alive, but from opposite approaches: Parade's was epic, retelling the tragedy of Leo Frank's trial for murder and lynching in 1913 Atlanta on a grand canvas, with the large cast of St. Edward's University students and faculty members, all on the same historical page, catching us up in the sweep of history. Wife's was personal, dramatizing the life of the fascinating transvestite Charlotte von Mahlsdorf, who survived both Nazi and communist regimes, through a single actor, with Glenn Peters' marvelously clean performance and Dave Steakley's intimate staging drawing us close and catching us in this mystery man-woman's spell.

Have You Ever Been Assassinated? (Rude Mechanicals)

Get Your War On (Rude Mechanicals)