All Eyes on First Night

Tweet
print
write a letter
Dec. 31 will see fireworks over Town Lake and a Grand Procession down Congress. Pyrotechnics and parades give us a chance to fully utilize our public spaces and actively express our shared values. Austin values include: Costumes rule, bikes rule, afterschool programs rule, group art activities rule, and so does our unique regional musical diversity.

All that comes together in First Night Austin, a celebration of art on the final day of the year that also celebrates our desire to make arts and crafts, look at people, and gather as a broad community. Last year's debut of First Night drew more than 100,000 people to Downtown on New Year's Eve. For the second year, the footprint of the festival has been scaled down a little to cover Congress south of Sixth Street, the 2nd Street District, City Hall, the First Street Bridge, and Auditorium Shores.

Projects to look for this year: The LCRA commissioned Johnny Walker, creator of last year's popular Floating Dragon, to create an artwork called Water Works. Water scooped from the river will be used in thousands of luminaries placed on the lawn. The Alamo Drafthouse will bring its large-format cinema and excellent programming to the First Street Bridge. The Central Texas Mountaineers will again scale the Radisson Hotel but this time with the dancers of Blue Lapis Light, fresh from their acclaimed Intel building sensation, Requiem.

Video artist Luke Savisky has been commissioned to create a piece called The "I" of TX, to be projected on the Second Street water tower. Using a high-powered projector, Savisky will operate a live camera feed at San Antonio Street. Volunteers will sit at the camera and have their eyeball portrayed up on the water tower for all to see. Savisky is able to highlight a key architectural element – a water tower – and transform it with video. It's great to see this big festival support his installation work.

The Hip Hop Block Party has a different tone altogether. In front of Bank of America (515 Congress) the four elements of hip-hop will be experienced: Wild-style graffiti will be painted in bright colors by Nathan Nordstrom, B-Boy City (Romeo Navarro and friends) will breakdance battle, DJs will scratch records, and MCs will be present. The MCs will be members of the Austin Poetry Slam team. I can't prove it, but just watching breakdancing makes you lose weight and feel younger. While some art projects are subtle or quietly pretty, this area will be vigorous and high-energy.

But those are all evening activities, and a key component of First Night is being family-friendly. To get a family perspective on the event, I interviewed Anne Elizabeth Wynn and her two charming daughters, Larkin and Kyrie.

Austin Chronicle: Where will you watch the Grand Procession?

Anne Elizabeth Wynn: l'll watch the Grand Procession somewhere near the turn from Congress Avenue onto Cesar Chavez. Everything kind of piles up, and the crowd has started to spill into the back of the Procession by then.

AC: Why is it important to have Downtown festivals like First Night Austin?

AEW: For me, it's important to encourage families to use public spaces to foster a sense of personal and still shared ownership of said spaces ... and, simply, to get more people hanging out together in a mutually convivial manner.

AC: What is a highlight from last year's festival that you thought about throughout the year?

AEW: The highlight from last year that still brings such a smile is my moment standing in the large sculptural installation Field Sketch 01 on Auditorium Shores at dusk. The piece itself was physically gorgeous, as the down lighting made the million feet of hanging filament twine look a bit phosphorescent against the sky. But, even more than that, I just watched as every possible different permutation of humanity in our community moved through that created and somewhat consecrated space and greeted each other with warmth and a sense of shared experience. Like C.S. Lewis approximately said, "Art, like friendship or laughter, has no survival value whatsoever. Rather, it is what gives value to survival." It was so wonderful.

Then I asked the girls what they remembered and liked. Larkin, age 10, says her favorite part of First Night Austin was the Grand Procession, "because of all the fun it brought to the kids. It makes the kids feel special and happy to see all those artsy people out there." She also ranked the fireworks as a favorite "because the fireworks are telling you there's a new year coming up, and so you want to make the best of it." Having a family that actively supports the festival and other philanthropic endeavors, her closing statement is a credit to her mother, who swore no coaching was involved. Larkin added, "First Night is a cool program to raise money for artists, and it's a really cool thing." Kyrie, age 8, said her favorite part of First Night Austin was "making things." Kids can tell when things are really intended for them. With so many creative parents in Austin, it's a given that there are many future artists in our midst. Group art activities like the ones offered at this event encourage creativity at all levels.

The new staff of First Night has done a terrific job of matching venues with artists and business sponsors. The number of returning artists from last year is a substantial indicator of satisfaction with the festival. The businesses, artists, and individuals who sponsor this event are supporting a vital Downtown, where lobbies and courtyards are filled with smiling families. Tune in Austin; it's time for a family parade, feats of artistic daring, and a celebration of our city. 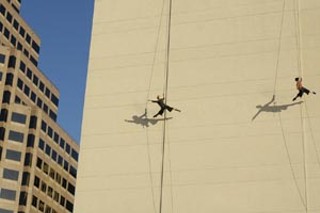 Laura Cannon and Nicole Whiteside rehearse Blue Lapis Light's Angels in Our Midst on the west facade of the Radisson Hotel. (Photo By Bret Brookshire)

Guitar City Knits – Dream Island, Triangle Island, First Street Bridge at Cesar Chavez. Attach a personal dream to a piece of colored yarn, and weave it through the trees in unpredictable patterns. 2pm–12mid.