Arthouse's EVR: e-flux video rental offers a chance not only to see some very interesting, hard-to-find pieces of film and video art, but also to participate in a study of our own patterns of communication 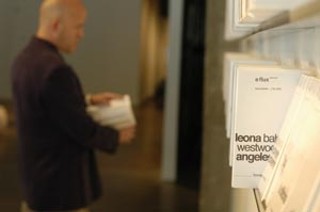 Arthouse at the Jones Center, through Jan. 7

At a time when we all might have thought that video rental was becoming passé, taken over by online video streaming and Netflix, the self-described "New York-based information bureau" e-flux presents a joint opening of three such rental locations in Austin, Istanbul, and the Canary Islands. An interesting assortment of apparently unrelated choices, to be sure … which is something that might initially be said of the e-flux video rental (EVR) project itself, since its video holdings snowball from city to city as area curators add their favorite and often obscure pieces of video art to the EVR mix. But while it may seem random to have Austin curators such as Risa Puleo and Annette Carlozzi contribute any films they choose to the project as part of its two-month stay at Arthouse, it does in fact serve a real purpose: EVR was conceived by e-flux as a collaborative enterprise, and contributions from every site where it's stationed broaden the number of participants in the project, just as the movement of sites and librarylike policy of "renting" the videos – in short, it's free – ensures an ever-expanding audience of viewers. This ongoing expansion creates a dynamic map of contributors and participants that mirrors our own culture of increasingly inter-netted lives. With a simple sign-up process and a notecard membership, all of us sign our names into e-flux's own reconfiguration of the networks we embody on a daily basis.

But EVR is much more than that as well: For interested viewers who aren't ready to commit to the two-day return policy, EVR offers on-site TV/VCR combos that bring back all the best trappings of video rental culture. In fact, just after choosing between the cushy couch or the beanbags, I was quickly reminded why those "please rewind" stickers were used by so many video stores. The films are arranged in alphabetical order by artist, and a numbered guide to the collection lets you pick out films based upon who recommended them. After grabbing Carlozzi's pick of "Saberverv&etildeencias," I sat down to screen "Hello, Ms. Schnitt." With Austin's EVR located just inside the glass front of Arthouse, watching this terrific five-minute flick by Corinna Schnitt was a double experience of both viewing and being viewed. Friendly and curious smiles of passersby reminded me that Arthouse's window serves as a screen itself. As more and more lunch-goers passed the building and glanced inside, one stopped to ask, "What is this place?" While the gallery attendant had a helpful answer, I wondered how she could honestly begin to explain that this art gallery, currently Austin's EVR, was a chance not only to see some very interesting, hard-to-find pieces of film and video art in what was once an emerging technology but also to participate in a study of our own patterns of communication – of information flow and networking by immersion. It is a chance to check out of the world around you, and into it, all in the very act of renting or viewing a film.