Throughout the City Theatre Company production of Reckless, a Christmas tree remains stationary center stage, but that's about all that's still in this flighty black comedy 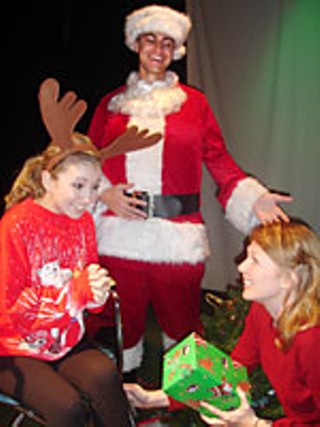 'Twas the night before Christmas, when all through the house, not a creature was stirring, except for the hit man contracted by Rachel Fitzsimmons' spouse. As the children were nestled all snug in their beds, Rachel told her husband how perfect her life was as a stay-at-home mother, only to have him reply that he'd hired a killer to break in through the bay window and make her death seem like an accident. And to all a good night, indeed.

Craig Lucas wrote this black comedy, Reckless, in 1983, providing Rachel a long freeway from family values into reckless abandon. Despite the strange turns of events, she remains totally chirpy. Her head up in the snow-filled clouds, she is downright flaky.

Without a thought to leaving her two boys behind with her homicidal husband, Rachel runs away. She catches a ride with a soft-spoken physical therapist she meets in the street, lobbing her wedding ring out the car window and changing her name to Mary Ellen Sissle. The therapist, Lloyd Bophtelophti, takes her home to meet his deaf-mute girlfriend, Pooty – if you want to ensure laughs throughout your play, name one of your characters "Pooty" – but things with this couple aren't quite what they seem. Lloyd isn't his real name (he's eluding a marriage in arrears), and Pooty is faking her deafness in order to speed up her disability benefits. But the happy-go-unlucky trio manages to win $100,000 on a game show while wearing planets on their heads.

Chance pushes Rachel into another escapade the following Christmas, when her husband finds her. Bounding for every Springfield in America, Rachel falls into a series of tête-à-têtes with therapists (a Freudian, a hick, and a monk – all played by a man of many caricatures, Clay Breeden), none of whom seem able to help her reason the things that happen to her. With genuine innocence, Rachel eludes the scandal and horror of embezzlement, premeditated murder, men in ski masks, and drunken Santa Clauses.

Throughout the City Theatre Company production, a Christmas tree remains stationary center stage, but that's about all that's still. Artistic Director Andy Berkovsky has the actors buzz around like weirdos more than kooky characters, which is just what the doctor ordered. David Meissner makes an obnoxious game-show host in a light-blue tux, and Ginny O'Quinn delivers bubbly performances as the mute yet chatty Pooty and, later, a trash talker on a talk show. As Lloyd, Adam X. Medina's haunting composure and smile never crack, even as his character's mind does. And Laura Caslin's Rachel flies adeptly, if at first anxiously, through the production. She teeters and flails at just the right moments; her voice trembles at the thought of Christmas. Her enthusiasm is the production's locus, even through Rachel's collapse and her finally abandonment of recklessness.