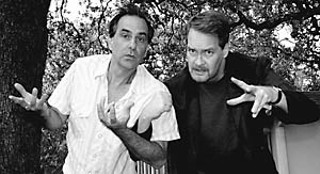 They tell us from the beginning what to expect in Double Exposure. Wayne Alan Brenner, Austin Chronicle Arts Listings editor, and David Jewell, local poet, inform the audience in a casual flashbacklike banter. The distinctive frame is a project that is a "clearinghouse" of their work that's "not boring." Using their unique observations on their life experiences and having documented quirks of human nature, the pair splits the night into two segments: Jewell to read from his book of poems, Lizards Again, now celebrating its 20th anniversary of publication, and Brenner to highlight some monologues, some previously performed and others freshly hatched.

On an almost bare stage, enter Jewell and Brenner. They exchange a brief guy-friend hug and offer each another their life summation in brief since they last met. During the conversation, Elizabeth Mason interrupts as an autograph-seeking fan requesting the signature of semifamous David Jewell. (He played a character having a metaphysical mind warp in Richard Linklater's Waking Life.) Brenner seems annoyed, not out of jealousy, but out of the lack of attention given to him as he's relaying to Jewell some vulnerable story about his life. Prompted by a stint of confusion from the two people demanding his attention until they give up and leave, Jewell smoothly transitions to a poem. He moves behind a podium and continues to offer more poetry, using voice amplification.

Jewell's poetry is decadently subtle through acute descriptions of odd, impossible moments, like pondering how best to use the few milliseconds of time before a bullet hits your head. He daydreams about love after reading a physics dictionary, playing with concepts of attraction and gravitational pulls encircling a body in a revolution. Jewell extracts tiny moments, exposing bits of truth and imagination that connect thought to body and heart.

For the start of the second set, Brenner sits covered in a black sheath, and we wait. The curtain falls off him, and after a few tense seconds of staring, he bursts out in a song sounding something like Devo crashing a Kraftwerk album. He is intensely focused, projecting a contained energetic thrust while remaining immobilized in an armchair. "Sitting in the armchair watching the scre-e-een," he sings. Slightly awkward, definitely original, and performed with lofty abandon, it's a glimpse of something that seems like it's meant to be sung at home alone when you are making stuff up on the spot. And it happens to be a catchy little ditty, too.

Other sketches include monologues seamlessly performed by Elizabeth Mason and Mical Trejo from Brenner's previously produced theatre piece, Screwed Into the Book of Love. Following the lineup are such contemplations on artificial intelligence and a "nonfiction" story about an embarrassing sexual mishap. In another segment, Brenner dresses as a Magnolia Cafe waiter and tells the tale about a butter scoop ripping out an eyeball. It is through these topics that Brenner and Jewell's knack for capturing nuance in the mundane entertains in a concise set.