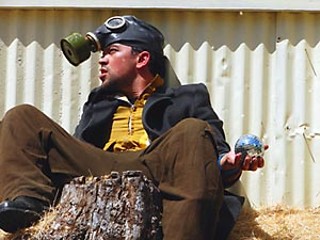 Who knew desperate people were this sappy? Or this talkative? Or turned down blankets and food in favor of songs and sentiment?

Salvage Vanguard Theater's world premiere of Caridad Svich's Thrush can be seen in their new warehouse space on Manor Road. The space is going to be great. The current work is a bit tedious. It's miraculous to take a war-ravaged world and make it dull, but when audience members occupy themselves by sleeping, chewing on their fingernails, and searching through their purses, one must draw the conclusion that such a miracle has occurred.

Caridad Svich, an accomplished American-Latina playwright, employs heightened language in her play. The characters speak in poetic fragments: He was a mad one/Wrecked boy/I give him a dirt smile; Vomit words don't mean spit/I should cut you is what/An act of cleansing. Such language lives or dies on the tongues of the performers, on their ability to make it ring necessary. In this production of Thrush, the actors are not able to make this language live. It comes out of their mouths stilted. What we hear sounds like writing and not like the ravings of cold and hungry half-dead refugees.

Elizabeth Wakehouse originates the role of Minerva, Thrush's forlorn heroine. The trouble with Wakehouse is that she does not speak her lines, she emotes them. Thus, the play is about twice as long as it needs to be. More tolerable performances are handed in by the rest of the cast, particularly Katherine Catmull as Bette, who is pragmatic about her despair. Jason Newman's Soldier Furst is a tongue-in-cheek villain – fun to watch but far from frightening. Actually, all three male actors have trouble posing a credible threat; they're awkward with their prop guns, halfhearted in their cruelty. Jude Hickey comes closest to seeming desperate; and Mark Stewart runs the best scene in the show as a guard forcing people to sing "fact songs." The only riveting performance is handed in by Gina Houston, the yin of the yin-yang chorus. She never speaks, only sings, but she watches the movement of the play with intent concern. Her other half, Adam Sultan, can be found leaning against the scenery and staring at the ground. Sultan composed the music for this "play with songs." Lyrical, lovely, and parallel to the tone of the show. It manages to reinforce the plot.

In terms of environment, Jenny Larson (in her first SVT main-stage directing effort) and her team of designers serve the play well. It is nondescript and contained. All action takes place on a tarp covered in dirt and pinned down with rocks. The dust fills the air and your nostrils. Larson keeps the physical movement simple and sharp, even handling a stylized rape scene with precision. This allows us to really hear the language of the piece. Unfortunately, between the structure and the pacing, that's where things fall apart …

Thrush has some fatal flaws. The climax is built around a revelation of false double-casting. However, some of the actors actually are double-cast, so the turn holds no power. Neither do the bonds between characters. As the play begins, Minerva and Bette meet one another. Within minutes they are kissing, and within several more minutes they are using words like "always" and "never" to describe each other's behavior. They haven't earned those words. They are not Didi and Gogo, who have been bearing one another for eternity. When these characters harm one another, there is little weight and no surprise.

The furious moments – a scene about people vying to cross a border; a meta-song-and-dance in which the sad characters perform their sorrows; someone being strangled to the blasting beat of the Bay City Rollers – stand out from the poetic wash. It's not that poetry is senseless in a "shattered terrain." It seems wholly possible that in darkest times, there will be nothing left but poetry. But it will be the kind that is ripped from the gut and the brain, not the sleeve heart and the tear duct. Not once did I believe in the world that Svich imagined. The fault lies partly in her ill-conceived structure and partly in SVT's slow and sentimental production.