With a new wave of interest in ventriloquism, what better time for full-time Austin puppeteer Bob Abdou to launch a course in Ventriloquism 101? 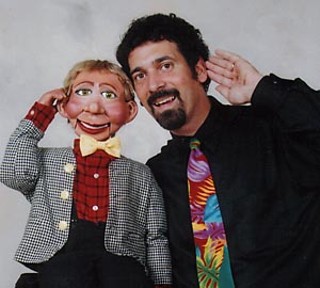 It's been an unusually good season for ventriloquism: David Letterman devoted a whole week of Late Night to entertainers who talk to dummies (and the dummies who talk back to them), and virtuoso ventriloquist Jay Johnson – anyone still remember Soap? – broke onto Broadway with his popular tribute to the lost art of throwing one's voice, The Two and Only. What better time, then, to launch a course in Ventriloquism 101? And that's just what Bob Abdou has done. The full-time puppeteer with 16 years in the biz – he's known professionally by the says-it-all sobriquet Mr. Puppet – offered the course through Texas Union Informal Classes this fall, and, lo and behold, people signed up – most of them people he didn't know. And a diverse little band of aspiring ventriloquists they were: a university instructor who teaches Japanese, a 13-year-old who's already been performing at ventriloquists' conventions, a singer-songwriter, a retired policeman who wants to use puppets to teach safety to schoolchildren, and a friend of the ex-cop who at first came along just to observe but then got hooked enough to try it herself. As four of the five had no experience with ventriloquism, Abdou had his work cut out for him. But he showed them videos of top ventriloquists at work and walked them through the basics: stage presence, acting-reacting, manipulation, script writing, lip control. Then he had each develop an act that reflected his or her particular interest in the art form. "I taught them how to play the piano, and they wrote their own music," Abdou says. This week, he's giving them the opportunity to play that "music" in public. He secured Cap City Comedy Club for an evening of ventriloquism built around the graduates of his debut class. Mr. Puppet will host the show, naturally, and perform between the students' acts, and young Jacob Skidmore – the one who's 13 – will open the show. Abdou would love for his students to have a big audience to perform for, and he's hoping the current buzz for ventriloquism might help draw a crowd, but in any case, he'll be riding the wave of interest in his field for at least another semester. The Texas Union has already invited Abdou back to teach the course in the spring.