'The Fall of the House of Usher': When Debussy was a Poe boy

With UT's hosting of the Debussy International Congress comes a Halloween treat: an operatic adaptation based on Edgar Allan Poe's 'The Fall of the House of Usher' 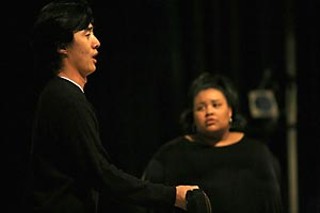 Tired of the same old haunted mansions with chain-saw psychos and hockey-masked wackos covered in copious amounts of corn-syrup blood? Looking for a truly original way to spend the season of ghosts, goblins, and all things spooky and scary? I've just the thing: an American premiere of Claude Debussy's La Chute de la Maison Usher, a one-act opera based on Edgar Allan Poe's short story, orchestrated by Robert Orledge, arguably the world's most renowned expert on the French composer, and directed by Robert DeSimone, head of the Butler Opera Center and a recent inductee into the Austin Arts Hall of Fame.

This week, the UT School of Music is hosting the Debussy International Congress, a gathering of artists and scholars focusing on the work of the late-19th-/early-20th-century music revolutionary. While the congress will include lectures, an exhibition at the Harry Ransom Center, and performances of Debussy's music – including a vocal recital by French soprano Frédérique Added, a piano recital by London Royal Academy of Music's Roy Howat, and a string recital by the Miró Quartet – the centerpiece of the congress is three operatic compositions, one each from three different periods in Debussy's career, done in concert and offered on performance dates both during and after the congress. In addition to the American premiere of Usher, the concert will feature one of Debussy's earliest works, L'Enfant Prodigue (The Prodigal Son), a one-act opera that won Debussy the Prix de Rome, as well as a world premiere orchestration by Orledge of Chansons de Bilitis, a three-song cycle from the middle of Debussy's career.

"The idea for the congress had been floating around for a while," says Marianne Wheeldon, assistant to the directors of the congress. "It was originally supposed to be last year, and we came up with a big proposal, and it was too expensive, too big, so we were asked to pare it down. Then one of the original committee members, Dell Hollingsworth, went to a French opera conference at Yale University, and she met Orledge, who said he had just recently finished Usher and that we could have the American premiere. And that was the final piece of the puzzle to make this thing work."

Orledge was a professor of music at the University of Liverpool for many years, but he took early retirement so that he could indulge his penchant for "creative musicology," a new field in music study that focuses on finishing works left unfinished by the old masters. Usher was such a piece. "The view in the late 1970s was that something left unfinished was better left unfinished," says Orledge, "but I was asked to do the Durand critical editions of the sketches that Debussy left for Usher, and I eventually realized that by using Debussy's material for situations in the opera when they came up later on, you could join the whole thing together. And that's what I've done. About half of it is by me, and half of it is by Debussy, but I use Debussy's themes and Debussy's ideas, expanding them and changing them to suit the dramatic situation."

So will it be horrifying enough to give you your Halloween fix? "There's a vagueness in Poe's stories," says director DeSimone. "Between 'A' and 'C,' you start filling in the blanks. There is every suggestion that Roderick and his sister may have a somewhat unhealthy relationship. This is not unlike Wagner's Ring Cycle where you have the story of Siegmund and Sieglinde, who fall in love and find out they're brother and sister. But hey, it's okay in the opera."

All lectures and performances are open to the public. For considerably more information, visit www.music.utexas.edu/CampsConferences.