The Zachary Scott Theatre Center revival of 'The Rocky Horror Show' provides Austin, and especially fans of all that is Rocky, with an experience worthy of the word classic 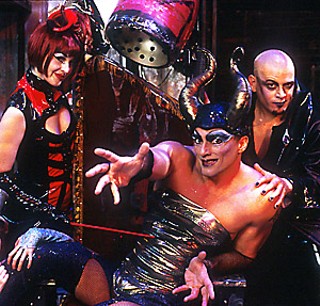 After attending the Zachary Scott Theatre Center revival of Richard O'Brien's The Rocky Horror Show, the camp-transvestite-horror-rock musical that was made into a film of like name and became a midnight cult hit in the late Seventies and early Eighties, I was stunned to learn that my 16-year-old son, who is as deeply into popular culture as anyone his age, had never heard of it. Could it be that the story that brought the words "transvestite" and "transsexual" to the forefront of American culture had somehow passed its revolutionary prime?

Well, sure. You'd figure that would be the case, wouldn't you? After all, it's been more than 30 years since the stage musical and its film adaptation were first produced, and while we don't yet have television series about transsexuals, given the proliferation of popular entertainment that includes characters, if not entire stories, revolving around nontraditional sexual choices, we can't be that far off.

None of which is to say Rocky isn't relevant. Although I'm sure it was thrilling and more than a little titillating for audiences in the Seventies to watch this show about Dr. Frank N. Furter, the sweet transvestite from Transsexual, Transylvania, and his creation, the heavily muscled, only slightly clad Rocky, it wasn't about relevance as much as it was about parodying things close to the hearts of any red-blooded citizen of Western culture: true love and horror movies, both of which you'll find at the heart of this story of Brad and Janet, the straight-laced, sexually repressed young couple who blow out a tire in a rainstorm and try to find a phone at a secluded mansion, only to meet the cross-dressing mad scientist and his cadre of kinky aliens. The plot hangs by the thinnest of threads, but just as the show isn't about relevance, it isn't about plot, either. Rather, it's about providing set-pieces for the show's truly outstanding music. Only rarely will you find one show with so many memorable songs – "Time Warp," "Sweet Transvestite," and "Hot Patootie," to name only three – and you'll never find another one in which the audience is encouraged to yell "asshole" and "slut" at the actors, squirt water guns to simulate a rainstorm, or throw toast, among other things, onto the stage. You also won't find too many shows with costumes, provided by Leslie Bonnell, and a set, designed by Michael Raiford, that are almost as entertaining as the show itself, and you'll almost never find an actor who is having more fun than Joe York. In varied wigs, stockings, garters, heels, and the most garish make-up, York's Furter makes over-the-top look like the most natural thing in the world. And while I wish I had room to mention more about Robin Lewis' show-stopping choreography – especially the most kickass, non-gratuitous curtain call I can remember seeing – and the other actors, particularly Bryan Bradford's Brad and Leslie Hollingsworth's Janet, suffice it to say that director Dave Steakley has provided Austin, and especially fans of all that is Rocky, with an experience worthy of the word "classic."

Afterward, when I asked my guest, a Rocky virgin, what she thought of the experience, she replied, "That was fucking insane." Heh – yup. It was!