Long Center: Halfway home, a peek at what's to come

Midway through Palmer Auditorium's transformation into the Long Center for the Performing Arts comes a new image of the center's crown jewel:2,300-seat Dell Hall 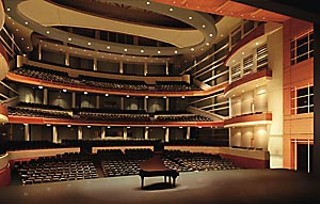 It was about a year and a half ago that crews began the job of deconstructing Palmer Auditorium, setting in motion that building's much-anticipated transformation into the Long Center for the Performing Arts. And it'll be about another year and a half before that process is complete and Austin will be able to enjoy a state-of-the-art arts center on the southern shore of Town Lake. For some of us, the idea that the physical work on this decade-in-the-works project is halfway home is mightily encouraging, but for those daunted by the prospect of another 18 months of backhoes, hammers, and hard hats, the Long Center has released an image to keep your eyes on the prize: a detailed visualization of the venue's crown jewel, the 2,300-seat Michael and Susan Dell Foundation Hall, complete with cherry-wood paneling. Pretty sweet.

FYI, the center is considerably more than halfway home in its fundraising efforts – more like 92%. In recent months, Austin's gay and lesbian community chipped in with a significant gift: $52,500 from several individuals and same-sex couples that was matched by $50,000 from Long Center trustee Dennis Karbach. And Judy and Wally DeRoeck, who had previously pledged $400,000, upped their donation by $600,000 to a cool million. Only $6.2 million is left to reach the project's $77 million goal. To make your contribution, call 482-0800 or visit www.thelongcenter.org.