With 'Luca Cambiaso, 1527-1585,' the Blanton bucks the trend toward superstar exhibitions and spotlights a lost Renaissance master 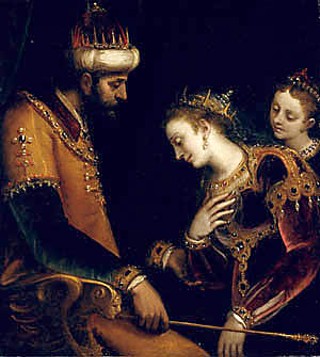 Every industry and field has its superstars. Film has its Tom Cruises, music its Madonnas – names everybody knows. But just because artists like Van Gogh and Renoir don't often get their names flashing in digitized neon on the hottest marquees – Da Vinci being a recent exception – doesn't mean they can't sell out the house. Yes, just as there are blockbuster movies, there are blockbuster art exhibits: those shows that you know will draw a crowd, that travel from city to city, advertised on street-lamp banners, right next to the hanging flower baskets. We've all seen them – or at least we've seen the T-shirts, coffee mugs, and mouse pads that testify to their existence. And there is nothing wrong with them. Superstar shows are what help get the public involved in art, what bring into the museum those who might otherwise spend an afternoon at the mall or on the court or in the bookstore.

Yet, in addition to those blockbuster movies, there are those fantastic, provocative, lesser-known independent films that change your view of everything. Everybody is talking about them; everyone is wishing they'd made them. And this is exactly what the Blanton Museum's current Luca Cambiaso exhibit is doing in and for the world of art. In contrast to the blockbuster exhibitions that abound, the Blanton has put together a major exhibition that scholars and art historians have looked upon as one that really needed to be done. Because the truth is that Cambiaso, this late 16th-century painter whose name you've likely never heard, laid nothing less than the foundation for the Genoese School of painting. By the end of his life, his work spanned the Italian Renaissance to the Baroque, fluxing always between idealism and empiricism, between form and expression. Based on those achievements, he should be well-known. But ironically, Cambiaso's name has remained obscured from our eyes, at least in part, because of the fame he accrued during his own lifetime.

Born in 1527, Cambiaso learned at an early age to paint and draw from his father. Throughout his career, Cambiaso was commissioned by all of Genoa's wealthiest families, resulting in a large volume of paintings addressing mythological, intimate, and religious themes, as well as some extraordinary panel work, including Nativity, which makes its first appearance outside Italy in the Blanton retrospective. Cambiaso's fame in his day rested not only on these prestigious painted works, however, but also on the exceptional volume of drawings that he and his workshop produced and disseminated. In the manner common to the times, Cambiaso took paid students and apprentices, who learned their craft by imitating their master. Yet in a manner uncommon to any artist before him, Cambiaso turned the drawing, the draft for that planned masterwork, into a masterwork all its own, a piece that could stand alone apart from the painting it might have laid out – an art form that could be honored, purchased, and valued in its own right. For many artists of that era, prints were the means by which their work was replicated and their name established in the larger world, but since Cambiaso's home city of Genoa lacked the infrastructure for printmaking, the artist dedicated his studio to the replication of his works through duplicate drawings. "Line for line, shadow for shadow," as the exhibition co-curator Jonathan Bober says, Cambiaso's students multiplied each piece, allowing his work to travel, to be bought and sold on a larger scale than would have been possible otherwise. Unfortunately, this large-scale dissemination also watered down the bloodline of his work. With so many nearly identical pieces attributed to Cambiaso, it was difficult for collectors, scholars, and historians to separate the authentic Cambiaso drawing from the work of his students. Over time, Cambiaso's work got lost in the output of his studio protégés. His work rarely saw the spotlight outside of his own hometown.

While the drawings and paintings of northern Italy between the Renaissance and Baroque periods had always been of interest to the Blanton's curator of European prints and paintings, Bober, it was with the acquisition of the Suida-Manning Collection of European Art in 1998 that this interest became a relationship. This outstanding collection offered the Blanton seven paintings and more than 50 drawings attributed to the hand of Luca Cambiaso, thus putting the museum in charge of more than half of the 11 paintings by this artist in the Unites States. The potential for something big, something important, was evolving. Yet it was not until there was confirmation that a new space would be built for the Blanton that Bober truly began to envision a major exhibition of the work of Cambiaso, the first outside Genoa and the first major U.S. exhibition to share his work with the public.

University galleries rarely touch shows of such a scale, but with the paintings and drawings of the Suida-Manning Collection as a solid core, Bober and the Blanton pushed forward. Still, the lead-up to the exhibition was not without its hurdles.

First, as with any major exhibition, there was the issue of selection. In the case of the largely unseen Cambiaso, Bober didn't have to worry about which works had been overused or what timeless classics every viewer would hope to see. There weren't any. Rather, looking at a major figure whose body of work had never been viewed outside of Italy posed a very different challenge: deciding which works outside the Blanton's own holdings must be seen and working out how the museum could borrow and show them. Due to the sheer scale of Cambiaso's later work, Bober knew that some works simply couldn't travel. He also knew the cost of transportation – ranging from $12,000 to $15,000 per piece – would limit the selection. As a result, Bober chose carefully, asking for loaned work from collections which held more than one significant Cambiaso piece. While Blanton supporters and donors, most notably AT&T, stepped up to collectively fund the exhibit, Bober also maximized the power of each dollar by suggesting that various museums and collectors close to one another consolidate their deliveries. Thus, a museum in Munich, Germany, volunteered to carry the work for Stuttgart, Germany, and some major institutions in England collaborated in this vein, as well.

The next major hurdle had to do with people power. To put together an exhibition of the size and scale of the proposed Cambiaso retrospective, the Blanton needed to hire three to four more full-time staff – at least. The museum solved the problem by entering into a partnership with Genoa's Palazzo Ducale, home to many of Cambiaso's finest and most significant works. The efforts of the joint team and gracious donations of time, scholarship, and curatorial energy by the Genoese overcame the need to bring on more staff. Moreover, the partnership blossomed into a joint exhibition, with the works now showing at the Blanton setting off for Italy to be displayed at the Palazzo Ducale beginning next March and a joint 384-page catalog, in both English and Italian editions, being published by Silvana Editoriale, Milan. With eight essays by leading scholars, catalog entries for each piece in the exhibition, and an appendix of scholarship and extensive illustration, it will be only the third major publication on Cambiaso and the first of its kind in English.

Add to this the facts that the Blanton had previously put together only two multisource exhibits, both some 20 years ago ("Renaissance Nuremburg" in 1983 and "Milan and the Renaissance" in 1987) and that the museum only opened its new gallery this past summer, and the odds of the Blanton successfully pulling off a project of this scale might have been unthinkable. But thanks to the support of the Palazzo Ducale, not to mention the dedication of the Blanton's staff, the unthinkable is not just a reality but an international success.

The global impact of the exhibit can be measured in part by the way curators from the Louvre to Vienna's Albertina have raved about it. In fact, the Albertina's own Heintz Widauer, on the scene of "Luca Cambiaso, 1527-1585," lamented the turn of his own museum toward superstar shows and away from the kind of innovative work represented in the work here by Bober, the Blanton, and the Palazzo Ducale.

Even with all this praise from the world's major institutions, Bober says he still looks to his friends, people he knows and sees at Waterloo Records, Sweetish Hill, and around town, to gauge interest in and response to the show. And while "Luca Cambiaso, 1527-1585" may not have visitors breaking down the doors, the gem imbedded in this exhibition is the way that this new name, Cambiaso, and this Renaissance figure most of us have never heard of begins to ask very provocative questions of us, his viewers. As Bober puts it, the impact of this show and its real success lies in answering this question: "What does it mean to look at the Renaissance again, when you think you know the names, the figures, and encounter a really fine and fascinating personality you've never heard of before?" This is "Luca Cambiaso," and this is the stuff of "breakthrough" independent curating and art. This is where contemporary and Baroque and Renaissance collide and share territory: when they move beyond the blockbusters, the sellout shows, and the all-too-familiar to truly open up something new and something unexpected from a world and a history we think we know so well.