'Parade' is an ambitious musical for a university theatre department, but the entire company presenting it at St. Edward's is impressively in tune with Alfred Uhry and Jason Robert Brown's retelling of the Leo Frank case 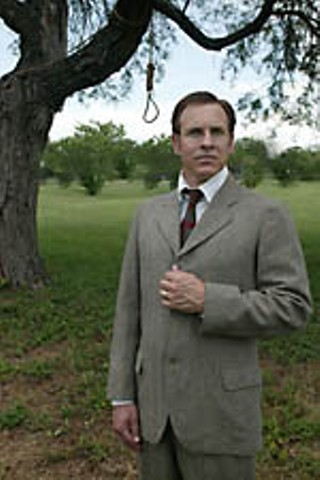 A 13-year-old girl has been murdered, her lifeless body discovered in the basement of the factory where she earned 10 cents an hour putting erasers on the ends of pencils. Hours earlier, she'd picked up some pay from her supervisor, Leo Frank, who would seem the least likely of suspects – a reserved, cerebral engineer, almost painfully reticent in his dealings with others – but he's also an outsider: a Brooklyn Jew in an Old South still stinging from its humiliating defeat by the Union a half-century before. And with an outraged Atlanta demanding a culprit, that's enough to earn him their suspicion.

You don't have to know the facts of the Mary Phagan murder case to know this won't turn out well. Parade establishes a mournful tone from the outset, with a Confederate soldier singing a solemn ode to the hills of his Georgia home. It – and almost every scene flowing from it – throbs with the deep loss suffered in this land and the grievance borne out of it, the sense that someone has to pay. And it becomes patently clear early on in this musical retelling of the infamous incident that in 1913 Atlanta, that someone will be Leo Frank.

But composer/lyricist Jason Robert Brown and book writer Alfred Uhry take pains to show a confluence of factors fueling this railroading of a stranger in a strange land: Atlanta's devotion to its Confederate heritage, the age and innocence of the victim, public discontent over child labor, desire for a quick conviction from politicos facing re-election, a racist publisher promoting his own political agenda, a cynical newshound desperate for a story to flog. There's the feel here of tributaries coming together into a flood, its current mighty enough to carry away anything. And Leo Frank's caught in the swirl of history.

We can almost see it in the show as staged at St. Edward's University. Director Ev Lunning Jr. sends his large cast in a sweeping promenade around the edges of the Mary Moody Northen Theatre stage, creating a human whirlpool with David Michael Long's Leo moving on its fringes – against the tide. The character's alienation and otherness are palpable, with Long making Leo so cool and prickly – even to his wife, Lucille – as to almost earn our disdain. But there's purpose to it: His distance in the first act, when he's tried and unjustly convicted of Mary Phagan's murder, gives him a gulf to bridge in the second, when Lucille battles to reopen his case. As she swims against the current, the character of Lucille blooms, and in Libby Dees' feeling and forceful performance, we see a woman of great resourcefulness and resolve; when she crashes the governor's party and stands before him, immovable, she's as steely a magnolia as Dixie ever produced. Recognizing Lucille's efforts on his behalf, Long's Leo warms into a humbled, grateful spouse. Here, Parade shifts from the political to the personal, moving us with not only an account of injustice but a tale of love, redeemed through trial and sacrifice.

This weaving together of history and drama, injustice and romance, is indicative of how ambitious Parade is. Its creators strove for complexity in its depiction of setting and character, as Brown did in his score, layering period melodies into contemporary music and crafting rich, dark harmonies that convey the ache and tension of the time. As such, it's a huge challenge for a university theatre department, even one employing as many experienced guest artists as St. Edward's does here. Which makes it so impressive that everyone here appears to be in tune with Uhry and Brown. The company looks all of a piece in the starched collars and long skirts crafted by costumer Blair Hurry and moves all of a piece, whether executing period dance steps by choreographer Stacey Huston or leaning in intently at Leo's trial. And it surely sings of a piece, its voices marshaled by Michael McKelvey into a tight mass of varied musical shades. When individuals stand out – as when Daniel Adams launches into the jaded reporter's vaudevillian critique of his town's taste in news or when Quincy Kuykendall commandingly leads a chain-gang chant or when Lanella Zotter, Kimberly Barrow, and Kate Eminger hauntingly sing and dance the testimony of three factory girls with a lascivious version of Leo – they do so in service of the story, making that current run a little harder, a little faster.

These artists are in step. And watching them stride together across the stylized stars and bars that Michael Massey has laid down on the Mary Moody Northen stage floor – his set is a marvel of detailed period rooms, black-box spaces, and theatrical symbols of Southern life – we see a parade, a unified march into the past to reflect to us some measure of the present.