Tales Behind the Posters

Tweet
print
write a letter
The images on Micael Priest's posters are impressively memorable. The sly wit and wild style imbued within is instantly recognizable. Yet beyond the portraits and art lie the stories of how the posters came to be. As Priest tells it, sometimes the story is in the poster itself. Even better, sometimes it's not. – M.M. 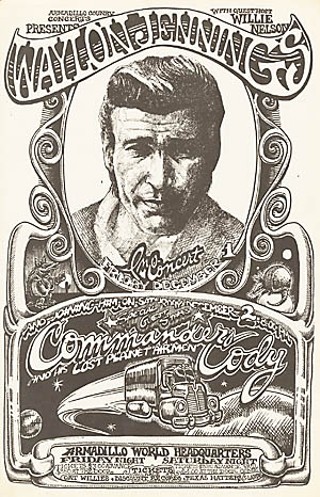 "When Willie came the first time, he said, 'My friend Waylon Jennings would really like this.' The radio was playing 'Down to Seeds and Stems Again Blues' by Commander Cody, but they were a big band, and we couldn't afford them. The Armadillo never paid a deposit to anybody. You had to be brave enough to come out here, and we'd give a real high percentage against a low guarantee at the door, so you had to have a lot of cojones and a little faith [that] we knew how to promote our shows.

"Willie talked Waylon into playing here. Waylon and his boys were still really greasy, and if you watch the Willie Nelson show on PBS, you'll hear Waylon say, 'That little redheaded sonuvabitch. I walked out there, and it was a bunch of damn hippies!' Waylon was very upset and wanted to kill Willie until he saw what happened. He started playing, and the audience knew all the words and started singing and dancing. We knew when Waylon brought all those people in, we could afford Commander Cody all the way from San Francisco. My friend Tom Hanson did the actual portrait of Waylon, and I turned it into a poster.

"Cody and the Lost Planet Airmen were the preservers of truck-stop music and honky-tonk music in the Seventies. They were always singing about the ozone, so I drew the Ozone Express, headed out between two worlds." 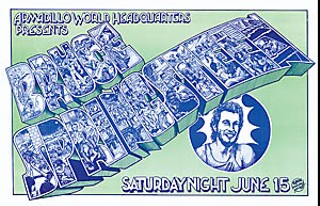 "I'd worked very very hard to get Bruce booked at the Armadillo. That meant going to [Armadillo founder] Eddie Wilson's house early on a Saturday morning and sliding the Springsteen record into the Hot Tuna stack on his turntable spindle. Uncle Walt's Band had just signed to Warner Bros. and brought Eddie their contract for him to look over. So off goes the Hot Tuna record, and here comes Springsteen, and everybody's tapping their feet, saying 'Whoa, what's this?'

"'It's that guy Springsteen I've been telling you about,' I said. 'He's going on tour.' That was back when a band would go on tour before a record, so you'd know who they were and buy it.

"They gave the damn poster job to Jim Franklin. That was Bruce's first tour here. But I was hanging out with him and the band. You know that little kid's cowboy belt he's wearing on the Born to Run cover? It used to be mine. But about this poster. If you go through the first two records, you'll find all of these visuals in the songs. Unfortunately, I was the king of not-very-good portraits. I'd wait until the end, so I was usually tired." 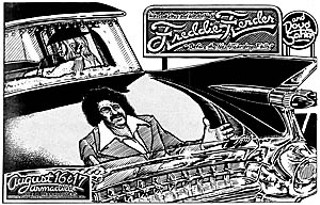 "A lot of people don't realize Freddy Fender went to the state penitentiary in Louisiana in the early Sixties for being a Mexican with two joints. Doug Sahm had been playing Fender's stuff for years and made sure everybody not only knew those songs but knew who did them.

"When the Armadillo was going to bring Freddy, I went to Keith Ferguson's house and said, 'We gotta do the greatest poster ever. Help me think up something good.' Keith gave me a picture of Freddy looking real soulful and suggested we have him reflected on the back of a car, discovering his girlfriend with someone else. So we used Dave Moriaty's Cadillac, which appeared in many of my posters, and took pictures of Keith sitting in the back seat.

"I get it all done and turn it in, and they told me Doug Sahm was added to the bill. I didn't have room for his name and didn't know where to put him, so I was able to squish up the Freddy Fender letters on the billboard in the background to get Doug's name in. And Doug ended up in the back seat with Freddy's girlfriend. Doug made Freddy Fender important and kept him important. That was way before the Tornados." 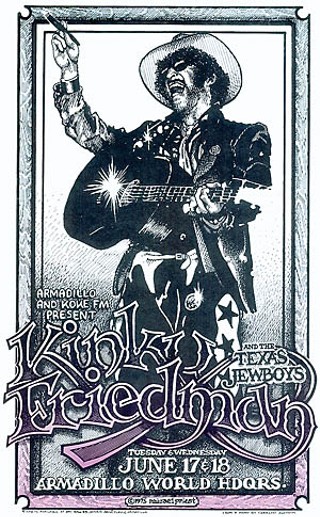 "Kinky was the scion of what some journalists named the progressive country movement. Steven Fromholz always called it the progressive country scare. Which I thought was a better idea. We introduced Kinky to the world in Luckenbach at a party for [progressive radio station] KRMH, also known as Karma. Kinky had an album full of songs and introduced us to the Jewboys. He had Tiny's outfit him in purple chaps with big stars on the side. While he was playing, the Armadillo security guys got together and made Kinky the Armadillo Security Sweetheart and presented him with the award. I don't remember what the award looked like, but he was irreverent, funny, and gentle. He had an edge, but he wasn't mean about it. I don't have much patience with this crap about him saying a Negro talking to himself makes him racist. What's the name of that college fund; are they racist?" 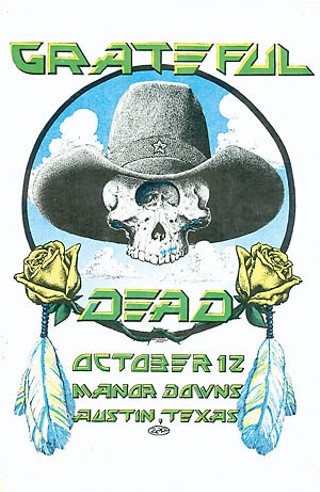 "My friend Sam Cutler, who worked for the Grateful Dead and produced Brian Jones' funeral, is unfortunately most famous for producing Altamont, and he became manager of Manor Downs in 1977. Sam had been the Dead's record liaison for their '72 Europe tour. I was finishing up a poster when Sam came running in. 'We got it! We got the Grateful Dead Rodeo! And we've got Larry Mahan, six-time world champion, and he's gonna buck out on a buffalo as they play the national anthem! And I've got the new album!'

"The new album had a wonderful Mouse cover, the one with the Cyclops skull. So I put a bull-rider hat on him and a Texas sky and twined some yellow roses with eagle feathers. We had just started Sheauxnough Studios." 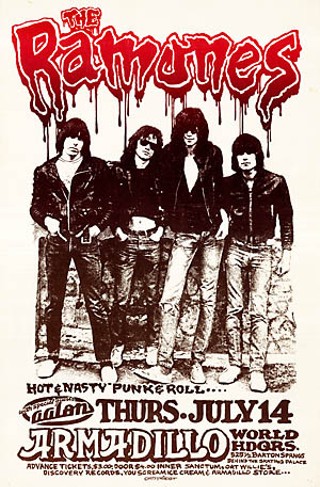 "I loved what the Ramones were doing so much. I had just read a book called Subliminal Seduction. If I couldn't stop them from doing it to you, at least I could do it in a nice way to us. I took a high-contrast velox of the band photo; then I went back and dotted in all the gray so that I could include about a hundred obscene subliminal suggestions.

"You have to understand if they can be seen, they don't work. You can tell in a couple of places something's there. That's part of [the word] 'fuck' on the leg. If you hold this up against the original photo, maybe you can see more of them. I made the letters for the band name out of meat. We told Joey it would be about 130 degrees in the hall and about 150 degrees onstage, and maybe he better not wear his leather jacket. We couldn't get him to take off the jacket. When the show was over, he went down like a tree." 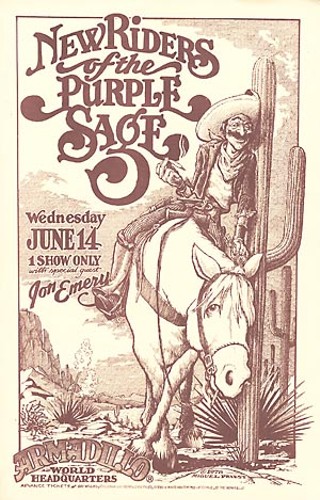 "This has always been my favorite poster, because I still liked it when I was done. Most of the time, you get a good idea, whack it down, then spend a way long time getting everything down. The execution takes way longer than the inspiration. Which is why people don't understand how much intense concentration it requires to do a fine illustration. And we came from the tradition before computer: There was no Undo. If you were nine-tenths of the way through and fucked it up, you had to start over.

"The letters were from a T-shirt on a babe with really large breasts, so they were horribly distorted, but it was such a good design [that] I took a long time tracing and retracing the letters, straightening them until you could read them again. This is a portrait of my horse. When I moved from the surf culture of California to the ruralities of Texas, my parents thought it was expedient to give me a couple of horses to keep me busy. She was an old range mare named Nugget and shaggy all year round. She'd never been shod, so she had really big feet. And was swaybacked. You had to put three blankets on her just to keep the saddle right.

"But the bandito is from their songs. He's coming home Sunday morning after a really good Saturday night in town. He's stopping to take a break with a smoke and a tequila bottle. Notice the saddle horn. A nice little round mirror. And I liked how I kept the sky all swoopy. Many of these tricks came from pulp science fiction illustrators." 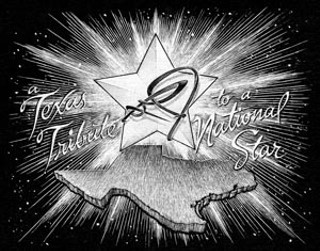 "Barbara refused to be wheeled onstage. She wanted to wheel herself. So they had to build a gigantic ramp the length of the front of the stage. She did it. She got up there and turned around. All the senators and congressmen, national and state, that she'd served with were standing up there. Everyone got their pictures taken with her, standing beside her in the wheelchair. When I got there, I squatted down, so our faces were beside each other. Barbara was so tickled, she hugged me around the neck and smooched me. She had the voice of God. I always wished I had a voice like that." 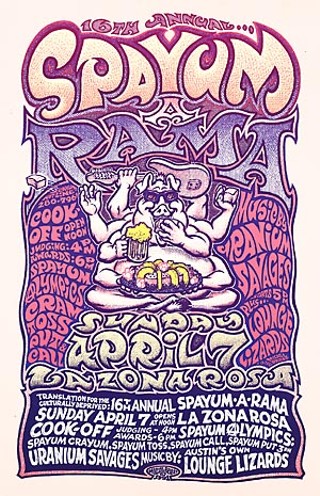 "This was the first year of Spamarama [that] we weren't allowed to say Spam. The previous year, the Spam workers went on strike in Austin, Minn. and Hormel busted the strike and brought in scab workers. We used the Spamarama as a benefit for them. The president of Hormel came with the president of Armour [foods] to Spamarama and saw the workers standing outside. They noted how well we were doing with the merchandising and immediately came out with a catalog of Spam merchandise and a cease-and-desist order to stop using the word 'Spam.' So we called it 'Spayum,' which is how we say it in Texas anyway." 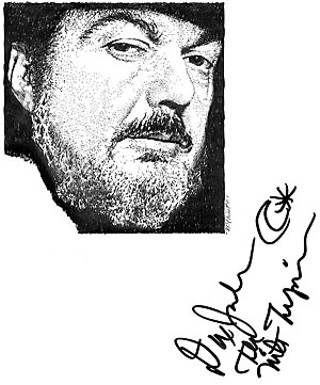 "I noticed that a lot of people playing the One World Theatre used to play the Armadillo and was going back and forth by the place a lot. Finally, I took my portfolio and went down to see Hartt Stearns and Illuminada. They were sweet and nice and excited and wanted a poster of all the acts performing that season. I said it sounded great, when does the season start? 'Day after tomorrow,' they said. 'About a hundred acts.' Well, that wasn't going to happen. So what I did was make a drawing of each act for them to sign it when they came. But when it came time to put them all together, it didn't happen either. Some hadn't been signed; some people like John Mayall wouldn't allow other merchandising, various reasons.

"But what these really have turned out to be are the last fine-ink portraits that I have been able to do, because my hands have gotten so crunchy and my concentration is so far out the window.

"This one is of Dr. John. I left a place for him to sign, but he was distracted and signed it in the wrong place."