That treasure trove of cultural archives at UT has recently been expanded to include photographic portrait maker, playwright and actor Sam Shepard, and filmmaker Woody Allen 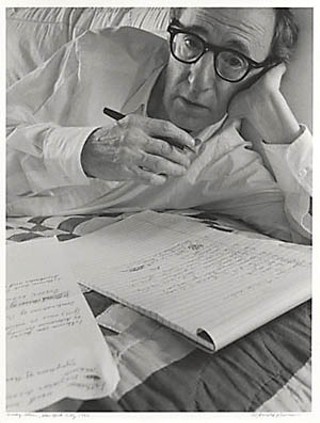 That treasure trove of cultural archives on the 40 Acres has recently been expanded to include a master of the photographic portrait, a maverick playwright and author who doubles as a Hollywood star, and a stand-up comic who evolved into a major filmmaker. The Harry Ransom Humanities Research Center announced last week that it had acquired the archive of the late Arnold Newman, who died in June after a monumental career spent photographing the world's leading figures, from LBJ to Picasso to Jonas Salk to Diana Vreeland. Soldiers, scientists, painters, composers, captains of industry, models, U.S. presidents – Newman shot them all, typically in the environment in which they worked or lived, a style he pioneered. The archive spans his earliest work from the late 1930s through his final images of the last few years, including all of his negatives, contact sheets, color transparencies, slides, and more than 2,000 prints. A slide show of works from the archive may be viewed at www.utexas.edu/features/2006/newman.

Just a week before, the Ransom Center made public its acquisition of an archive of Woody Allen materials. While mostly consisting of screenplays and production items for some three dozen films (including some screenplay drafts for movies that weren't made), the collection also contains scripts and playbills for a few plays and some personal effects, including childhood photographs, lobby boards for a stand-up appearance in the Catskills, and a vinyl mask of his head. For the full list, visit www.hrc.utexas.edu/research/
fa/allen.woody.film.html.

The UT Libraries, meanwhile, have landed a wealth of materials from Sam Shepard, covering his triple-threat career as actor, author, and playwright. Secured for the Fine Arts Library special collections, the archive contains manuscripts for the 1972 play The Tooth of Crime, the 2005 screenplay Don't Come Knocking, and the 2002 story collection Great Dream of Heaven; film scripts for Black Hawk Down and The Assassination of Jesse James by the Coward Robert Ford; correspondence with German director Wim Wenders; eight of Shepard's Obie awards; and volumes from Shepard's library, such as his personal copy of his 1979 Pulitzer Prize-winning drama Buried Child, which becomes the 9 millionth volume held by the UT libraries. And the collection won't stop here: Shepard has agreed to offer future material to UT, too.