The curious saga of 20 portraits of British literary greats that UT paid Feliks Topolski to paint, then didn't show for decades 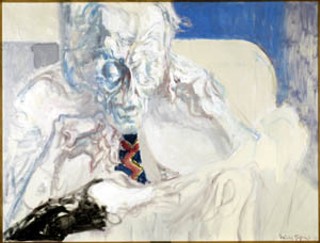 They seem about as improbable as lizard-skin boots on Victoria Regina: 20 oil portraits of leading figures from the British literary scene at a university deep in the heart of Texas. And yet, there they are, and not just at the university by virtue of them having been acquired by said institution, but by their having been created for it, on commission. And if there's something less likely than a Texas university ordering up a batch of paintings of scholarly Brits, it's that, after spending 20 grand and waiting two years to get them, selfsame university largely kept them hidden for decades.

Yes, the paintings in "Feliks Topolski: Portraits of Britain's Twentieth-Century Literary Greats," being exhibited now with great fanfare at the Ransom Center, did not get a lot of love from UT for many years, despite the fact that it was responsible for their creation. Oh, some periodically found their way onto the walls of the office of an admiring academic, but for the most part, these singular treasures, acquired through considerable effort almost half a century ago, languished unknown amid the Ransom Center holdings. And thereby hangs a tale, an almost lost saga of UT past that improbably, yet rather wonderfully, weaves together a Polish artist, an Irish playwright, a New York book dealer, a couple of Texas academics, two dozen British men and women of letters, art, money, and the death of Aldous Huxley.

The Irish playwright was none other than George Bernard Shaw, who befriended Topolski shortly after the young Warsaw native moved to London in the mid-Thirties. The two got on so famously – Larry Carver, director of the College of Liberal Arts' honors program and co-curator of the Topolski exhibition, likens their relationship to father and son – that Shaw invited Topolski to illustrate editions of his plays In Good King Charles's Golden Days, Pygmalion, and Geneva. The original art for these editions was acquired by UT in 1960 along with an almost 8-foot-tall portrait of Shaw that Topolski painted in 1943.

That portrait – described as "breathtaking" by New York book dealer Lew David Feldman, who brokered the deal for UT – was the connection between Topolski and the university that led to the commission of the 20 literary greats. Feldman was enough of a fan of the artist's work and a key figure in Harry Ransom's plans to acquire treasures for his Humanities Research Center that, even as he was securing approval for the purchase of Topolski's Shaw work, he could confidently propose to Ransom: "Let us commission him to do 20 portraits of our 20th century best, all from life." Feldman's estimate of the cost: $18,000-20,000 (closer to 150 grand in 2006 dollars).

It's worth noting that at the time the HRC, which we now consider this grand historical institution, was only 3 years old and still years away from bearing the name of its founder, much less having its own building. While it could claim an annual budget of $1 million, $20,000 was a lot to tie up in a single acquisition, especially with so much material out there to be bought. Which may explain why then-HRC director Warren Roberts was initially somewhat cool on the Topolski commission. In memos to Ransom, then UT president, he referred to "Feldman's Topolski scheme" and summed up the artist himself rather dismissively as "competent ... although his work tends to the caricature." Though he never suggested abandoning the project, Roberts was clearly not the enthusiast that Feldman was.

Not that that deterred Feldman, who was determined to see the project through. He kept pressing his case, arguing that the completed portraits would be worth more than twice what UT would be paying for them and be an "important achievement," to boot. The university was not fully persuaded, and talks over the commission dragged on into 1961 and 1962. At Roberts' suggestion, the subjects were to be split between British and American literary lions, but plans for Topolski to visit the States and meet his subjects never materialized. (How tantalizing it is to pore over Roberts' list and imagine Topolski's takes on the likes of Faulkner, Hemingway, Steinbeck, Sandburg, Dos Passos, Pound, Katherine Anne Porter, Arthur Miller, and Tennessee Williams.) The commission always seemed on shifting sands. Whether the portraits would ultimately land at UT remained a question for nearly two years.

Meanwhile, Topolski painted away, proceeding as if a buyer were always at hand. That may have been partly due to his being spurred on by Feldman, but it likely had more to do with Topolski just being driven to make art. He made it all the time, filling sketchbooks with drawings of anything and everything: princes and paupers, parks and war zones, babies, scholars, horses, you name it. He was a born chronicler of society and his times, in the tradition of Hogarth and Daumier. Graham Greene called him an "anthropologist ... who lays bare, as with a scalpel, the essential whatever-it-is of Britain's most cherished institutions." As such, one can imagine Topolski painting the 20 literary greats, commission or not, just to record them for his studies of the race.

Whatever his reasons, Topolski continued to work on the portraits, his preferred method being to visit with subjects for a few hours, producing drawings which could serve as the basis for his paintings, although occasionally, as with T.S. Eliot and E.M. Forster, he'd work from earlier sketches, photographs, or even his memory. Topolski didn't like to show his work to his subjects "so that I can draw unhampered by clogging restraints," he wrote. Larry Carver suggests that some of them must have seen his work, but it's clear that many didn't, as UT discovered to its dismay when it approached the portrait subjects, requesting their permission to reproduce the images.

But that came later. Sometime in the spring of 1962, Topolski completed 20 paintings, all of Brit-lit figures, and UT and Feldman sealed the deal on them. Carver notes August 31, 1962, as the day that the completed set of portraits arrived in Austin. Feldman had shipped them from New York four days before, gleefully noting the final cost at $20,381.45 and hailing the project as "certainly our most original contribution to the collections at Austin and perhaps ultimately it will prove to be among the most rewarding." Indeed, for a time it appeared that the university would welcome the portraits with the kind of pomp and flourishes befitting a major acquisition. Planned were: an exhibition of the paintings; an accompanying catalog; a visit to Austin by Topolski, who would give talks on contemporary art and his place in it; and an article on Topolski's work to be written by the eminent critic Sir Herbert Read (who had sat for Topolski as one of the literary greats) and published in Texas Quarterly, an impressive literary journal founded by Ransom in 1958.

Naturally, the Texas Quarterly article would include images from the portrait series, so UT, in an act that Topolski later amusingly characterized as "following some code of academic publishing chivalry," sent a letter to each portrait subject, asking permission to reproduce his or her portrait, as shown in an accompanying small black-and-white photograph. The responses were not encouraging in the least. Fewer than half of the subjects granted their permission, and most did so despite strong objections to their likenesses; C. Day Lewis noted, "I am not quite so corpse-like as the portrait suggests." Stephen Spender expressed their general feelings the most succinctly: "I hate the portrait, but if you must, yes." Then there were the responses of Rebecca West, Bertrand Russell, Aldous Huxley, Graham Greene, T.S. Eliot, and J.B. Priestley, all of whom refused permission, with Priestley not only deploring his likeness but calling the painting "an appallingly bad piece of draftmanship" and "a shocking mess." Worse yet, when Aldous Huxley died shortly after, the wife of his brother said that Topolski's portrait had so shocked and disturbed the author that it "contributed to his death."

The overwhelming lack of enthusiasm – and in some cases blazing disdain – for the portraits caught UT off-guard. Warren Roberts confided in a letter that he "never anticipated for a moment that enough writers would refuse to make the publication inadvisable." But once they had and once Sir Herbert Read declined to write the article on Topolski, pursuing the project seemed fruitless. In May of 1964, Roberts wrote Ransom, suggesting "we abandon plans for the article." Indeed, all plans to celebrate the project look to have been abandoned then. Topolski didn't come to Austin (and died in 1989 without ever coming here). No catalog was published. And the exhibition of the paintings didn't take place until 1967 in what was described to Topolski by an HRC research associate as "a rather intimate but distinguished showing ... in the Museum Gallery of the Art Department."

And it's only now, some 46 years after Feldman first pitched his grand idea for the commission to Ransom, that the paintings are being shown where they belong: in the true home to Ransom's literary and artistic treasures. For that we can thank Larry Carver, whose introduction to one of Topolski's portraits made such a strong impression that he sought out more of the artist's work and uncovered the story behind this largely unknown treasure in our midst. We no longer have Feliks Topolski to come talk to us about his work, but we will have his son Daniel and daughter Teresa to do so in his stead. And we'll have the portraits themselves, out of the vaults and on the walls for all to see, ready to receive the attention they've been so long due.