In 'St. Nicholas,' Conor McPherson wrote one hell of a one-man show, and Ken Webster executes it beautifully, making this tale of vampires seem as it might really be real 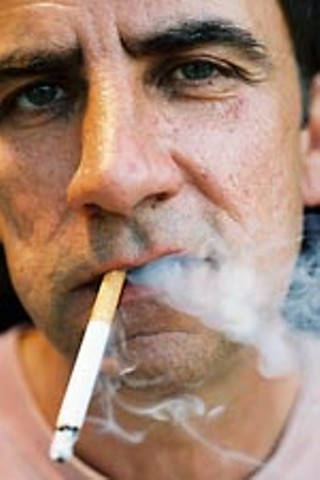 Perhaps you know you are here to see a play about vampires. Perhaps you are prepared to be scared. Perhaps a small part of you wants to be scared. So when the lights go out and stay out, when you sense that someone has entered the space, your skin, if you allow it to, will crawl a bit. From the darkness you hear, "When I was a boy, I was afraid of the dark. And perhaps one of the things I thought was there were vampires." So begins the journey of a play that takes the audience from Dublin's art scene to London's vampire scene. It is not a fright fest. It is a simple story. But Ken Webster, as our guide for the evening, manages to keep things on the verge of creepy. He affects a soft Irish accent and a secretive tone that make the audience feel as if they are hearing something they are not supposed to hear.

Conor McPherson wrote one hell of a one-man show, and Ken Webster executes it beautifully. St. Nicholas is storytelling at its finest: stories woven into stories. Sometimes the narrative is direct address, sometimes reenactment, sometimes an Aesop-like fairy tale, and sometimes a step-off-the-stage-and-turn-on-the-house-lights commentary on credibility and magic. The language is rich, and Webster attacks it.

Hyde Park Theatre's production honors the powerful simplicity of this play. Hugely focused. Simply staged. No trimmings or icing or ornaments. Only what is really there: a veteran performer, a famous young playwright, and a good evening of theatre. The set is nothing more than a chair, a table, and a glass of water. Webster, like the set, is simple in his presentation: well-dressed, calm, smooth like the scotch his character spent so much time drinking. Understatement peppered with moments of eye-bulging rage, Webster is a joy to watch, particularly once you enter the second act and the meat of the story, which goes like this …

A drunken, cruel, careless, and nameless theatre critic (in the program he is referred to as "A Man") has lost touch with his humanity. "I wasn't dying … I was dead." His exploits lead him to London, where he falls in with a pack of vampires who reside in the suburbs. The critic finds these vampires seductive and fascinating. "They had real power. Not the power to make you do what they want, but the power to make you want what they want." So he gives up his life in Dublin to become their servant.

What gets you here, what draws you in and will not let you go, are McPherson's detailed descriptions of vampires – real vampires. William, the head undead, says he only dislikes garlic because it gives him bad breath. The vampire's bite is not deadly or infectious or even memorable. The only vampire tale that holds any water is an Eastern European one in which grains of rice on a windowsill will stave off such creatures. William explains that this is "sort of true" because apparently the undead possess a compulsive need to count all the grains in a pile of rice. Here we see the beginnings of the breakdown in the Man's relationship with the vampires – and ultimately his reclamation of his own self. He is angered by William's vanity. Angered by the fact that William pretends this rice-counting "reflects a deep sense of inquiry rather than a stupid obsession." William the vampire wants a conscience but does not have one.

The heart of this story lies in redemption. Through his time with the undead, this dead-inside critic finds new life. The Man discovers what makes humans human. Reflection and conscience. Sadness and beauty. Trying to describe the creatures, he says, "Just like beauty in real life. Sometimes it's there, and sometimes it should be, and it's not." Webster pulls off some gorgeous and difficult lines in this play. It is hard to make writing this good sound natural, but Webster manages it easily.

There is a kind of non-twist at the end where we learn what we knew all along – that what Man gained from this whole experience was … a story. A good story. His own story. In his final reflections, the Man suggests, "Maybe wanting a conscience is the same thing as having one." We leave the Man as he is addressing hope incarnate, asking "Where are you? Where are you? Where?"

When we walked out of the theatre, the moon was shining, full and brilliant. Creepily enough, it seemed as if it all might really be real. Vampires and good stories and redemption.