Talented If Not Young

The artists in Mexic-Arte's 'YLA No. 11' may be beyond youth, but they're still definitely deserving of attention

We Are the Youth Gone Wild; guess how old we are? The current edition of Mexic-Arte's annual "Young Latino Artists" exhibition takes a group of twenty- and thirtysomething artists and labels them "young."

In curating "YLA No. 11: Juventud Desenfrenada," Alberto McKelligan Hernandez picked the best artists he came across and was quite specific about which pieces were right for his vaguely subversive and pluralist format. He chose artwork that had been exhibited before because it represented a variety of modes of expression, a variety of points of view. But if his objective was to show how complicated it is being young, he failed because he didn't work with young artists. Based on the biographies provided for the exhibition, most of the artists in "YLA No. 11" are between 25 and 35 years old. To me, only Grace Zuniga, at age 22, is what I would call a "young" artist. Some of the others may address adolescence in their work or exude a youthful spirit, but they are well-educated and have the detailed exhibition history of the typical emerging artist. (My definition of "emerging" is "not commercially significant," a state that can go on for years, until "emerging" turns magically into "midcareer," the state that persists until one finally gets the retrospective show.)

That said, "YLA No. 11" is still a cool show. This group of artists is interesting and deserving of exhibition opportunities. The eclectic gathering of works lends itself nicely to whimsy and various states of reflection. And adult themes are raised and well-articulated by these artists. To my mind, Hernandez has lovingly crafted an exhibition that shows how complicated turning 30 is.

But clearly his show comes at age from a different angle. The museum statement says that "YLA No. 11" "plays with the stereotypical phrase, esta juventud desenfrenada, an extreme overgeneralization that overlooks the diversity of young individuals in contemporary culture. ... The exhibit rejects these simplistic notions, as the artists included work with a variety of strategies within their particular mediums, including painting, sculpture, installation, photography, lithographs, woodcuts, and more. The works presented simultaneously explore and reject the contradictory stereotypes imposed on contemporary youth culture: idealistic/apathetic, ascetic/materialistic, carefree/despondent, selfless/egotistical, or innocent/perverse." So the show rejects silly notions like age in years. The artists more than 30 years old included here could potentially be flattered, and anyone aged 15-25 who didn't get considered for the show could potentially be peeved.

The backgrounds of these artists are as varied as their ages. Jamie Castillo is a father working and raising three girls; he has more responsibilities than many people his age. In contrast, artists Hector Hernandez, Angel Quesada, and Michael García have lots of free time and are going to collaborate together based on their separate takes on identity, yearning, and youth nostalgia, be that romanticizing cartoon books, make-up mirrors, or quinceañeras. This almost unlikely trio will discuss identity politics through recreated quinceañeras, proms, Valentine's Days, and pep rallies. This is the young factor as a state of mind: the ambition, the plans for the future, the making objects for their own immediate enjoyment. In this way, artists can be joined by temperament, by commitment level, rather than years. 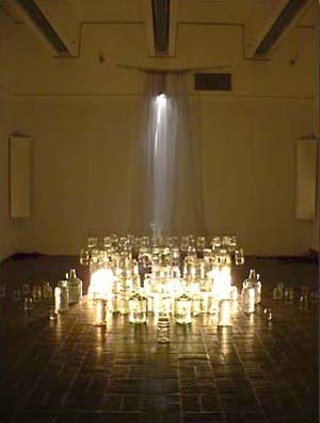 What is the inner agenda of Nido by Cesar Alexander Villareal? Outside, it's a big ol' nest made of drying sticks and grasses; inside, it's lined with fluffy white feathers. What takes this life-sized birdhouse to the level of revealing an inner agenda is the paranoia that occurs as the viewer leaves the feathery sanctum to see a TV monitor featuring a live camera feed. To me, the piece is more about a textured enclosure that creates a sense of false privacy than actual voyeurism. Since the catalog text mentions perversions, I tried to find some visual evidence. But most folks I saw around the work looked sheepishly at the spy camera and were not really good voyeurs. From what I observed, the TV aspect was comprehended with some slight but real paranoia, which is a great theme for art and architecture.

Another piece that uses a small room to invoke a physical response is Untitled (Drained), by Jaime Castillo. In the catalog, this work with dried flowers and amber light moving through water and glass is called a "sanctuary." In visual terms, it's pretty classical, and I found it soothing and rather reassuring to gaze at, although it could have used a chair or a pew to relax on. Castillo is an artist who lives in a small South Austin home with three adorable girls and a wife. I can only see this work as a response to his roles as husband and father. Rather than a commentary on the eternally young, Castillo's installation is about escaping noise and finding privacy or tranquility. It's not a juvenile theme, nor is it the work of an adolescent who wants to show his despondent isolation. I think good artists make art to address their own feelings, and when they achieve that, a larger audience may get on board emotionally. The responsibilities of fatherhood, of providing security for someone or providing sanctuary, are noted in Villareal's piece and Castillo's work.

Castillo will need his sanctuary space again when his girls hit that sweet 16 and he's asked to pay for their parties. Mis Quince is the title of an installation by Angel Quesada. I think it makes for great eye candy. It looks like a shop window display. As a jeans-and-Pumas-wearing tomboy, I shunned pink; I wanted to be different. But I refer to the installation's plethora of shiny pink stuff as populist and romantic. It highlights the unstoppable desire of cute teenage girls to spend money on crazy image-related stuff like clothes, make-up, and theme parties. This message of awe about flamboyant consumption is sincere, a heartfelt tribute that I find nicely patriotic. Go sweet 16, go quinceañera, go USA. Then again, it could be about being gay, some outsider analogy about being the kid in the candy shop with no money, no currency to access the delights it holds. 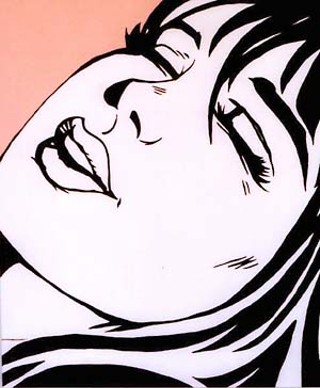 Detail of Debbie Does What Debbie Wants With Debbie's Sister's Fiancé, by Hector Hernandez (Photo By Rachel Koper)

The exhibit as a whole dabbles with identity and gender in various aspects. Michael García's In High Esteem is a light box with lace in which parts of a face are collaged into a circle, a mutant face looking at you. It's kind of a weird make-up mirror sculpture that seems to dare viewers to ask themselves, "How do I feel about myself today? Confident or mutated?"

Hector Hernandez is an excellent and humorous artist. He likes everyday stuff like cartoons and girls. His series of paintings for this show, Debbie Does What Debbie Wants With Debbie's Sister's Fiancé, is installed as a graphic novel. Each of the single-frame paintings on canvas relate to a passionate couple, rendered with clarity in pink, black, and white and then oddly joined by paper hearts dangling from the ceiling. This is straightforward; the narrative is all about good lovin' and seems very sincere and overly physical at the same time. Its theme could be puppy love, but the crisp, disciplined line work is all there, doing the work, telling you so much with such economy that I just don't care what the story is about; yearning for love is as fine a topic as any. Good curators will put guys together and tell them new ways to group and talk about themselves. A good artist will put these notions into action. Hernandez is able to riff on the female figure in a state of shock, being hysterically clutched by a man. After all, a woman in danger is universally interesting to the male gaze.

Saying something is cartoon-based or devoted to the male gaze is easy; actually doing this well is not. Hernandez wrote about the work, "I tend to visibly lay bare the prominent construction lines of my subjects, so that their 'social architecture' rears itself to the spectator. Also the color choice of my palette establishes relationships too, especially where they blend (or don't) together." Clarity is tasty, and I'm already looking forward to his new work. The paper hearts are another clue to Hernandez's charm; they take the edge off of the macho Lichtenstein vibe. I imagine that he painted the series, then had a bunch of his sisters sit around a table and cut hearts with him. 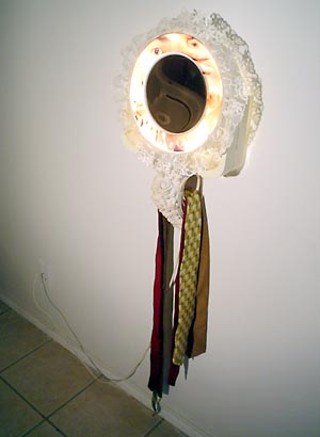 In High Esteem, by Michael García (Photo By Rachel Koper)

I've skipped over some pieces from this show that are worth discussion. Kimberly Garza Campbell's white embroidery on white paper, En Este Agujero, is soothing and feminine. Joe Peña's series of oil paintings simultaneously address oil refineries, industrial pollution, and labor issues with a love of landscape and an accomplished technique. They are carefully painted; the constructed blocks of tiny paintings are assembled into a very tidy larger piece.

Curator Alberto Hernandez dabbled in many topics with this show, and that was his intention. "By exploring the work of a varied group of artists, 'Young Latino Artists No. 11: Juventud Desenfrenada' undermines the voices of authority that would describe all young people as a homogenous block obsessed with fleeting pleasures, a dangerous wild horde that must be suppressed. While recognizing the voices of today's Latino/a youths is an increasingly pressing issue, the exhibit reflects on how different groups throughout the 20th century were dismissed as juventudes desenfrenadas: organized students of the 1960s, young workers who joined the Chicano movement, and others. If those groups of the past shaped today's cultural arena, one can only imagine how dramatically and emphatically will be the changes to come."

Yep, discrediting the young is so yesterday. And stereotypes about youth culture are difficult to discuss in Austin. The artists in this show should be proud of their maturity and the personal issues they address in their artwork. Still, as someone who works with actual kids and knows how inspiring and energizing they are, it would be great to see creative people between the ages of 12 and 17 get into this show and reclaim the moniker "young" from these thirtysomethings. Their camera-ready assets are anticipated fondly.