In his 'Confessions of a Mormon Boy,' Steven Fales reveals intimate details about his life as a Mormon and a male escort and proves himself as brave and courageous as a performer can be 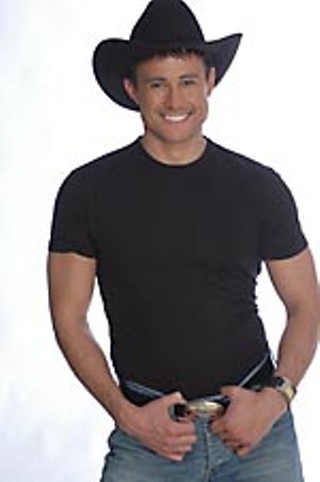 Arts on Real, through Sept. 9

We live in a culture of silencing and lies. For anyone to disagree with that statement would surprise me, but certainly it's possible that some, perhaps even many, might not agree. Should that be the case with you, I refer you to this latest touring production at Arts on Real. Subtitled "A True Story," it concerns Steven Fales, a sixth-generation Mormon whose life, from the time he could first remember, revolved around his church. He lived for Sundays. He sang in the choir. At 19, like every good Mormon male, he went on a two-year mission. He attended Brigham Young University. He married a woman he met there and had two children with her.

And he was a homosexual.

Well, let me rephrase that: He wasn't a homosexual. At least, according to the Church of Jesus Christ of Latter-day Saints, he wasn't a homosexual. According to the church, he was sick; he had a sexual disease. For Mormons, the word "homosexual" is an adjective, not a noun. For Mormons, homosexuals do not exist. (I'm not joking.) With the help of the church, Fales tried repeatedly, energetically even, to cure himself of his "disease." For the majority of his life, he tried to be a heterosexual male. But no matter how hard he tried, he found himself drawn to men. In time, when his wife discovered that he was having adulterous homosexual affairs, Fales went straight to the church and confessed – and was excommunicated for being a homosexual, was excommunicated for being this thing that the church claimed did not exist.

The reason I know all this is because Fales told me so. He is the writer and sole performer of Confessions of a Mormon Boy, in which he also reveals startlingly intimate details about his subsequent life as a male escort. And while he tells his story with the style and flair of a performer trained in musical theatre (he was), at no point in watching his show did I feel Fales was insincere. Theatrical, yes, but at base this show is quite literally a confession. Fales wants to be forgiven for committing a sin. Not for the "sin" of homosexuality, though. Fales wants to be forgiven for the sin of denying his innermost self.

Now I ask you: Which of us would do the same? Which of us would use our lives as fodder for a theatrical presentation in which, if we are to fulfill the highest purpose of our art – to instruct as well as to entertain – we are required to reveal the most intimate details about ourselves, and not just figuratively, but literally as well? There are numerous moments of revelation here. One involves Fales stripping to his underwear, and lemme tell ya, he's very easy on the eyes. Another involves Fales literally stripping away part of his anatomy, and that moment was beyond surprising and moving; it was stunning. Steven Fales is as brave and courageous as anyone I have ever encountered. Steven Fales deserves our attention because, unlike so many of those who claim to be our leaders, he tells us the truth.

Steven Fales is a hero.