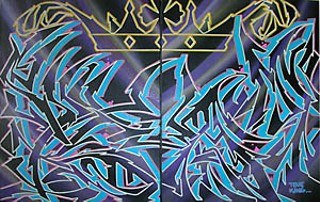 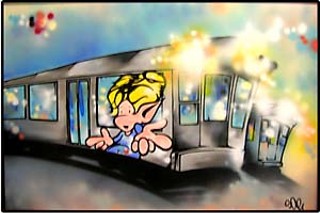 Recent announcements from APD that graffiti is on the rise make Gallery Lombardi's "Austin Graffiti Art: From Birth to Present" a well-timed survey of some of Central Texas' aerosol artists. An entire wall of the gallery is devoted to a history of the genre in town, with scores of photographs of colorful murals dating from the 1980s to today shown alongside a few shots of the artists themselves. If the thought of such a wealth of graffiti is sending chills down your spine or anger into your spleen, you'll be happy to know that most of these masterpieces have been painted over already. For aficionados, the documentation presented here is reason enough to stop by the show.

Curators Nathan Nordstrom and Chronicle Arts writer Rachel Koper didn't stop at this survey of outdoor work, however; they also included works on paper, photographs, and paintings by 15 local graffiti artists, with mixed results. The transition from mural-sized tags to smaller paintings on canvas has been a rocky one for many artists in the show, and there is a lot of second-rate work. Uninspired pictures of roses, a tiger, and a dragon – which could be grouped under the rubric of tattoo design – compete with several mediocre paintings of half-naked women in Lombardi's salon-style hang. Jason Schmidt's pinups succeed in terms of draftsmanship but are not much more interesting than the lingerie-clad woman posed in front of a mirror by Justin Prince. Between the buxom, blond babes and tattoo flash, "Austin Graffiti Art" goes a long way toward confirming the art form's adolescent tendencies.

The exhibition gets more interesting with numerous works that simply show stylized words, which could be studies for larger pieces. Daniel Chairez's are embellished to the point that they recall Renaissance grotesques. The artist builds fanciful figures and meandering, serpentine lines off of some of his letters, reveling in a kind of intricacy that only works well on the smaller scale of the gallery-bound canvas. Works like his Amores Lejanos suffer a bit from Chairez's use of magic marker, though, which doesn't have the depth and vivid color of aerosol paint, put to good use elsewhere by Mark Prellop and Blake Bermel. Prellop applies candy-colored hues that dazzle the eye to create a mix of sometimes blurry, sometimes more well-defined lozenge shapes, which form a signature stylistic marker that carries over from small-scale tags into paintings like Dondi, an homage to the comic strip character transported to the side of a subway train car. In contrast with Prellop's pop palette, Blake Bermel's paintings of massive, blue-faced figures with glowing eyes and thick black lips are darker in both color and subject matter, coming closest to any shred of political commentary in the exhibition. Uniformly dressed in black suits with red ties, these are "the man" personified in all of his greedy glory. The odd-man-out and the star of the show is Matthew Rodriguez, who is the only artist in tune with the current vogue for illustration-driven work. His tiny lunch boxes, replete with comical figures, are childish and a bit crude, but absolutely delightful. 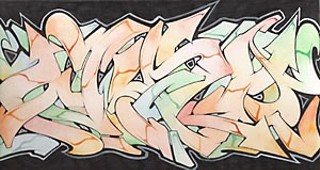 At the opening reception, at least, there was a surfeit of graffiti to go along with the art by graffiti artists displayed inside the gallery. A series of live demos brought the history wall to life, with murals going up for a huge crowd. As I watched one artist work, a train rumbled by with a few painted cars, as if on cue. Kids tagged up everything in sight, from street signs to light posts to trash cans. Today, perhaps, this is a problem for APD's graffiti task force; tomorrow, maybe, we'll see photo documentation of these permanent marker scrawls in another gallery show.