Allen Robertson and Jerome Schoolar, better known as the Biscuit Brothers, have carved a vigorous musical stage show out of their Emmy-nominated PBS program 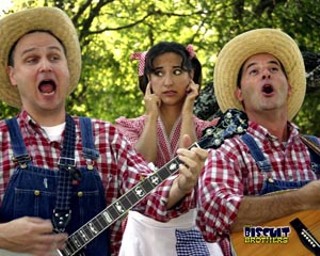 How do you outshine that brilliant children's song "Old MacDonald"? How do you top that ditty that perks up any Fisher-Price record player, that tune that's as worn as a pair of comfy denim overalls and as American as apple pie, that number that sings in the recesses of the collective imagination of every tyke and tot from the redwood forest to the Gulf Stream waters?

Sorry, Raffi, but you don't top it. You can't. Instead, you build on it, producing a symphony live on Old MacDonald's farm, bringing it back with all kinds of other staples from the songbook of childhood, performed by a couple of home-cooked hillbillies. It's such a simple idea that you keep wondering, "Why didn't I think of that?"

Allen Robertson and Jerome Schoolar, better known as the Biscuit Brothers (Buford and Dusty, respectively), have carved a vigorous musical stage show out of their Emmy-nominated PBS program. It's not just the albums, the TV show, or even the DVD, but the knee-slapping percussion, the familiar songs, and the smiling, sparkling characters that keep your kids from spitting on them.

The Scottish Rite Theatre, which is always crawling with girls in cute skirts and boys in Superman T-shirts, has opened its doors to the farm-folk fair of Biscuit Biz. The brothers come out twiddling their instruments with some of their polished originals, such as "Go Make Music" and "Barnyard Lullaby," then they stir in pastoral melodies and whip up renditions of old favorites like "Oh Susannah" and "Row, Row, Row Your Boat" in the round. Take away the modern clothing, the loudspeakers, and the request to shut off cell phones, and this live sing-along could be taking place 100 years ago, with nursery rhymes and children's laughter echoing off of the golden interiors of that stage.

But it's the appeal of these characters (and the talents of the performers behind them) here and now that strikes a chord in us and makes even the children fight for floor seats. If it's not Dusty making ear jokes, then it's Biscuit sister Buttermilk – Jill Leberknight in a patchwork milkmaid outfit – flashing her charming smile and jumping into the crowd of clapping kids, getting their attention all the way up to the peanut gallery with signs for "Applause" or "Moo." Or else it's Buford playing absolutely every instrument there is (which here includes the guitar, trumpet, piano, and the all-American banjo) or Tiny, the unscary scarecrow puppet, who looks like (but doesn't claim to be) a distant cousin of Grover and who can't seem to stop saying the magic words of the day ("melody garden"). And if it weren't for the Itty Bitty Biscuit Band, the slapstick and pratfalls would go unnoticed. They can quiet a pack better than an angry parent.

The brothers and company let it rise for no more than 45 minutes, the perfect amount of time for whippersnappers between the ages of 2 and 7, before ever letting the Biscuits fall.