Food faces, renegade puppets, rainbow purses, and nicotine washes – it's all part of the art of Matthew Rodriguez

This is the thing about stripped-down, bare-bones cartoon illustration: It can communicate important safety information or juvenile fantasy proto-political stencils. The outlined character art is clear, transcending linguistic barriers and uniting those who were raised by TV, the kind of people who keep a TV schedule in their minds that's more accurate than their résumés or their diaries. Matthew Rodriguez is a TV kid, but in a good way. Though raised by TV, he is a self-made man and open to city life as it really is. Drawing on typing paper, painting rainbows on purses, drinking Sparks, and making puppet shows. His comical paintings evoke smiles via familiar song lyrics and cheerful imagery. What I call recycling found objects, he calls Dumpster diving. His resourcefulness is impressive.

Rodriguez has enough sense to listen to the people, to listen to his audience. Bums tell him about his painting, and he asks questions. He leaves a box out in the gallery for secret notes, decorated with "I'll write back." People leave him notes, they stuff stickers and drawings in there, and they invite him to parties. For the cartoon heritage, for the shy guy, the artwork speaks, so he doesn't have to. His puppet Coupon dances and throws things, so we can laugh and not throw things.

Rodriguez is a rising star on the national art scene. He's had successful exhibits in San Francisco, Los Angeles, and New York, to name some outside of Texas, and this week he's opening his first solo exhibit, "duck, duck, GOOSE," at Volitant Gallery here in his hometown. He's motivated and ambitious, with boundless energy. I know one thing: When I'm at home sleeping my regular nine hours, he is not. As director of Gallery Lombardi, I have a less-than-objective view of him. Since 2003, I've worked with him on "Language of the Railroader," "Beans & Rice," "Mulligan Stew," and now "Austin Graffiti Art From Birth to Present," opening Aug. 26. So there, is this guy really that funny? Go see his artwork and decide for yourself. – R.K.

I Heard Something, mixed media by Matthew Rodriguez

Austin Chronicle: You have developed some recurring characters in different works. You create a character and then develop a narrative for him, building traits and a story as in a serial publication. How important is repetition in your work? Do you think of your work as being similar to a comic book?

Matthew Rodriguez: I think of every painting as a single frame in an episode of a cartoon series. In cartoons, you don't "repeat" characters; you develop a cast of characters that interact with each other. All of my characters have voices, personalities, background histories, criminal records, and love interests. Especially Tony Bologna and the Processed Product Gang – they've been having an ongoing feud with the Red Meat Mafia since '99.

AC: Everyone talks about Trenton Doyle Hancock in terms of an artist who creates superheroes, his own personal mythology, in his work. Have you seen his artwork at the Blanton?

MR: I don't know who Trenton Doyle Hancock is, and the only time I've been to the Blanton was opening night, when there was a line wrapped around the whole building. We cut in line by holding up Coupon and yelling that we were late for our puppet show, and they let us in with suspicious eyes.

MR: Coupon is a matted-fur puppet I made that I use to put on renegade puppet shows. He's a delinquent, he's a rock-thrower, and he's a heckler. My car has a moon roof that serves as a puppet window for Coupon to heckle people at red lights. One time I got pulled over by the police for having puppet shows out of my moon roof. They made me take a drunk-driving test, and then they asked me a bunch of serious questions about what I was doing with a puppet out my window.

AC: What are some of the materials you've tried over the years? What is your favorite art supply now?

MR: I started with crayons all over my childhood home, and I still have the most fun when using them to make my art. I like doodling something quickly more than taking forever to dip a paintbrush. You can draw with almost anything, but I prefer to stick with crayons and ketchup bottles.

My new favorite medium is food. I can't eat a meal without having arranged it into a food face. You know, fake bacon eyebrows, kiwi-slice eyeballs, a fake sausage nose, red-grape teeth lined up in a smile, with a nice big beard of burnt toast. That is my breakfast every morning.

AC: How has scavenging for supplies, by way of recycling found materials, influenced your art? How do you obtain the materials you use to make art on? What are some things you've made art out of?

MR: Most of the panels I use to paint on are made out of recycled materials, but most of the time it's more trouble finding the materials than it is painting on them. I usually have to scavenge abandoned buildings at night with a crowbar, hammer, and flashlight. Also, there is a secret Goodwill, unlike any other Goodwill. It is a huge un-air-conditioned warehouse that uses pig troughs instead of shelves and racks to highlight their wonderful selection of miscellaneous junk. Once a week, I poke through the piles of trash for sale with a long stick, and sometimes I find things like artificial Christmas trees that I can make monsters out of.

AC: As a self-taught artist, you use some interesting phrases to describe your work. Will you define how you paint a "nicotine wash" and what you mean by "old-timey"?

Tree Hugger, mixed media and photo
MR: I like my paintings to look like they were painted 50 years ago and have been faded, scratched, bitten by a dog, kicked by a raccoon, and water-damaged. One way I do this is by giving my paintings a "nicotine wash" top coat after the paint has dried. A nicotine wash is something I learned from the Blue Genie – it's when your painting looks like your grandma has been smoking cigarettes in her recliner chair indoors, with all the windows shut, while watching her favorite television programs for the last 20 years. It's the brownish-yellowish transparent look on her teeth and on her ceiling. One time, I sent some paintings to an art show in Canada, and the gallery owner called me all scared, saying they thought my paintings got all wet and damaged on their trip up to Montreal. But indeed, they were wrong. I told them they were supposed to look old-timey and nicotine-stained.

AC: What shows have been the most fun for you lately?

MR: Last year, I made the 16-foot-long cardboard subway train for Deitch Projects in New York. Walking inside of it, carrying it Chinese dragon-style down SoHo with celebrity puppets – such as Patrick Swayze and Arnold Schwarzenegger – was a cheek-hurting smile for me.

AC: Now that you are showing nationally, what have you learned about art? 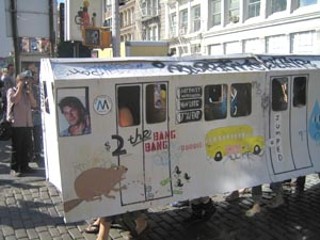 Take the "A" Train: Rodriguez's Subway Car in NYC
MR: With all of my travels, I have learned airport security doesn't like it when you try to bring cap guns on planes. Also, you can't buy cap guns in the state of New York, even for the artistic purpose of puppet shows. You have to figure out how to smuggle them in.

AC: What are you working on now?

MR: Right now I'm trying to make enough art to fill my first solo show at this new gallery at Fourth and Congress called Volitant. It's a super-fancy space with lots of hidden rooms and marble floors. There are going to be a lot of bigger pieces in it that I don't usually show. After that, I'm doing a group show the next weekend at Gallery Lombardi.

AC: What are you up to next?

MR: I have a bunch of shows coming up in New York over the next few months. I'm going to curate a show at Factory People after ACL and will have a line of limited-edition T-shirts I designed done by then. I'm also developing a TV show starring my puppet Coupon called Double Coupon Day that involves attempted interviews with stray animals and valuable lessons on the finer things in life, like Boone's Farm and Black and Milds.