As Naked as You Wanna Be 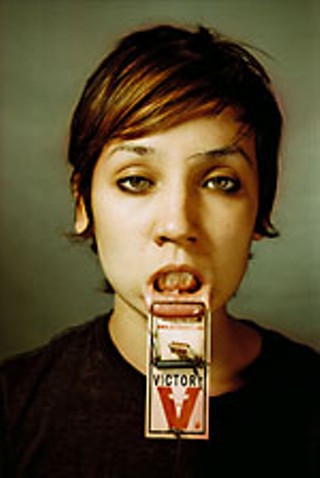 Their home is a shrine to the art and love they make: together, individually, or collaboratively with others. Whimsically twisted line drawings and paintings adorn the walls, as do brazenly intimate photo portraits, swimming in supersaturated cyans and otherworldly hues – all cataloging the glamour and mundanity of everyday life.

Celesta Danger and Tamara Hoover are the documented and the documentarists, and they've been documenting since they first met, three years ago.

"I hate cameras. I hate having my picture taken," says Hoover. "It was very unnerving and scary, but that was the start of everything. The camera is with her no matter where she goes. It's part of her communication with others. That's the way she reaches out to other people. It's amazing. She's got a very special gift. It's not scary anymore."

The school board's reaction (to deem Hoover "ineffective" and essentially fire her) cast a pall on the artists' creations. But that didn't last long. To expect that two women so dedicated to the love of self-expression could turn it off on command is to deny the nature of self-expression, isn't it? What better time to put on a show?

"I'm having a show of my work, and the pictures that I'm showing are my favorite pictures," says Danger of the decision to include some of the "pictures in question" in the show. "It doesn't have anything to do with 'I am going to purposely show these pictures,' because I wouldn't do that. I'm not interested in propaganda like that. Not at all." The show will also include some of the pair's most recent work, a series of seminudes of merkin-laden model "Michelle Fauxfur."

Cori Leigh, artist, recent NYC transplant, Houston native, and fundraiser and event coordinator, whose own apartment at the Pedernales Lofts will serve as gallery for the show, says that Hoover and Danger's story has inspired her "in their lack of censorship in all of the work that they do and in how their work is ongoing, all the time." Leigh pauses. "It's not work; it's play."