Chris Earle's psychological drama 'Radio :30' shows how advertising works, through a deejay's emotional collapse while he's recording a spot for a burger joint 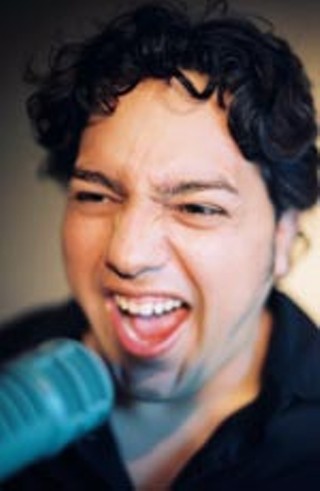 Anyone who slides behind a microphone to be a radio announcer has to have an ability to speak that can satisfy throngs of listeners who have itchy fingers and the will to turn off his voice at the push of a dial. It's a tough job. Who would want to be that anonymous voice in the box, consciously icy and forcing a rapid string of products and prices down everyone's throats?

Ron would. He can be quirky and captivating, and his claim to fame is his incredible ability to talk to you as if he were your friend. In a small recording studio created by eggshell foam squares pasted to the walls of Hyde Park Theatre's stage, Ron talks to us as he would to a friend while he's recording a spot for a burger joint. He has mastered that mellifluous singsong delivery and the tricks that hypnotize the average listener during a 30-second promo, and he is downright smug about it. "I am the talent," he says.

But the real talent is Mical Trejo who plays Ron and who happens to know what it is to slip on a headset since he works as a drive-time deejay for Jammin' 105.9. He already has a knack for all the knob-twiddling tricks, like how not to breathe heavily into the mic and the technique for smiling while talking. What good is a smile when no one can see you? It just makes you "sound" happier, Ron explains with welcoming enthusiasm. "If you're talking to your mom, and you want to make her think everything is going OK, just smile."

Suddenly, he's the product in his own hard sell to us, using his charm to describe how he slept with his best friend's wife. We see him become a victim of desire and indulgence, coveting the merchandise that he can't have. Trejo lays on a thick schmooze that makes you feel sorry for the bastard when he burns out and loses his self-promotional drive. You hate to love him for what he is. The geniality that resonates in his voice draws listeners in as he defends himself, saying that he'd rather be really good at something bad than really bad at something good.

Trejo and his production company, Universal Cynic Productions, were smart to ask Hyde Park Theatre Artistic Director Ken Webster to direct. Webster is the DJ master of emotional collapse – onstage, that is – and can steer even a professional radio announcer into a drained and silent rage. Pay attention to the man behind the microphone. Robert S. Fisher plays Mike, the sound engineer we don't see, who keeps eerily cool off-stage while giving supervisory suggestions: "You're a one-take wonder, but we were just wondering if you could be more quirky."

Advertising works. Chris Earle's psychological drama shows how consumers will base their decisions more on emotions than on logic. You'll walk around thinking about Ron's empty eyes and crooning the jingle from his promo that's repeated over and over and over: "Do you ever have one of those days? Do you ever wonder why?"