The 411 on Zachary Scott, how public art is made, and auditioning for the Macy's Parade 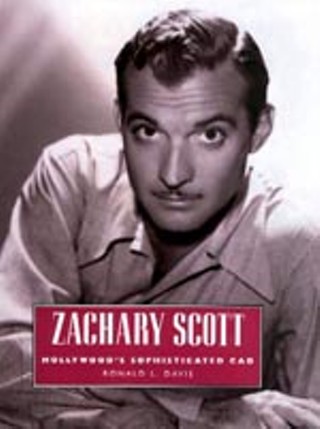 • Ever wonder why Austin has a theatre named after Zachary Scott or what else he did besides bedevil Joan Crawford in Mildred Pierce? Well, you can find out from author Ronald L. Davis, who's just penned the first biography of the Broadway and Hollywood actor who cut his dramatic teeth at Austin Civic Theatre. Davis will talk about the book Zachary Scott, Hollywood's Sophisticated Cad at – where else? – the Zachary Scott Theatre Center this Saturday. Davis crafted his portrait from interviews with Scott and his friends, as well as correspondence from the Scott papers at UT and the Warner Bros. archives. A booksigning will follow the free talk Saturday, July 29, 6pm, at Zach's Whisenhunt Arena Stage, 1510 Toomey. For more information, call 476-0541 x1.

• Public art got a fresh, public ripping last week following a pair of Statesman columns on the Lamar underpass work, Moments – you know, the one with the blue metal signs. Clearly not a favorite for a lot of folks. In fact, the level of outrage was so excessive, you'd have thought the artist stapled dead puppies to those signs. The timing could hardly be better, then, for the city's Art in Public Places program to be holding a workshop series providing an overview of the public-art-making process. The programs are designed for artists, but any citizen is welcome and could gain insight into the way public art comes to be. This week's workshop, From the Studio to Public Art, is Saturday, July 29, 11am–1pm, at play! Theatre, 1204 Cedar. The remaining workshops areÊAug. 26 and Sept. 30. For more information, visit www.cityofaustin.org/aipp.

• TexARTS, the new performing arts academy and producer of the recent concert version of The Music Man, has scored a Central Texas stop for the national auditions for the 2006 Macy's Thanksgiving Day Parade. Kids ages 10-14 are needed for the opening production number, "Give Me a Drum!," composed by Michael Feinstein and choreographed by Tony Parise. Children chosen to perform will also participate in a five-day workshop conducted by Camp Broadway (fee: $695 per child). Open-call auditions will begin at 10am, Friday,ÊAug. 4, in the Winship Drama Building, 23rd and San Jacinto, UT campus. Children are encouraged to bring a head-shot and résumé, and be prepared to dance and, if asked, sing. For more information, call 965-6050.