An Arabian Midsummer Night's Dream doesn't do justice to Shakespeare's comedy, but the goodwill, visual splendor, and flashes of magic in Tongue and Groove Theatre's show can transport you halfway 'round the world 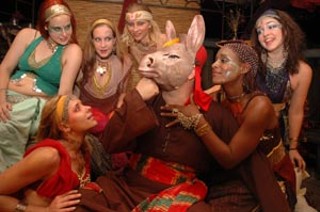 While the Swan of Avon was known to crib plots and characters from the writings of others, you can safely bet that it wasn't Scheherazade Shakespeare was channeling when he penned A Midsummer Night's Dream. Theseus and Hippolyta, the dense, fairy-infested forest, and those rough-edged craftsmen seem rather far removed from the sultans and sand dunes of The Book of One Thousand and One Nights. And yet, when transported to Arabia, the duke of Athens and his Amazon bride fit quite cozily in a caliph's palace, the rude mechanicals look right at home in the bazaar, and those enchantments of the fairy world translate handily to the land of djinnis and magic lamps. All of which is to say that if you're christening a new outdoor performance space behind a Middle Eastern eatery, as Tongue and Groove Theatre is in back of Ararat, An Arabian Midsummer Night's Dream is actually an ingenious and fitting way to go.

Tongue and Groove artistic director David Yeakle and his sizable company work overtime at seasoning their transplanted Shakespeare with Middle Eastern spice. The sprawling playing space – five distinct areas spread over a full 180-degree arc – offers onion-domed turrets, faux palm trees, swaths of white sand, and, painted on a tiny house left of the main stage, a mural of the desert under a starry night sky. Laura Cannon outfits the cast in earth-toned cotton tunics, trousers, and robes set off by brilliantly hued sashes, sheaths, and fezzes of the lushest fabrics, many of them luxuriantly patterned. Titania and her fairy train – transformed as if by magic into a harem of midriff-baring bellydancers adorned in all manner of sparkly, jangly baubles, bangles, and beads – enhance their supernatural allure with the spellbinding charm of that ancient art form (especially as embodied in the sinuous, sensuous shimmying of choreographer Mimi Kayl-Vaughan). Puck's speedy circumnavigation of the globe is made on a flying carpet (enchantingly depicted via shadow puppetry and a fully fleshed airborne puppet created by Conor Hopkins). By and large, these elements, offered under a darkening summer sky, succeed in transporting us viewers at least halfway 'round the world to a place of somewhat exotic delights.

Alas, the play itself isn't always fully present once we arrive. Yeakle has edited away a good half of the script, compressing the characters more into types, which actually serves to play up the Dream's fairy-tale feel and give him room to play the comedy as commedia – one of Yeakle's specialties – as well as keep the story moving briskly along. Unfortunately, the levels of experience among the 19 performers are so varied that the production overall has difficulty realizing the director's vision, much less breathing life into Shakespeare's text. For every full-bodied performance such as Felizdia McDonald's sensual, beguiling turn as fairy queen Titania, there's one that strains against the text or ends up creating an inadvertently abrasive character. Veterans such as Mark Stewart and Elizabeth Doss, skilled at playing classical verse and comedy, are given relatively little to do, which puts more of a burden on the less proficient performers, some of whom force the comedy, causing it to go flat, and some of whom simply can't be heard (although a rather loud kitchen fan that runs throughout the show contributes substantially to this problem).

This may not be the place, then, to go for savoring this oft-told tale as Will set it down in Elizabethan England. But there's enough goodwill and visual splendor here – not to mention flashes of genuine grin-inducing magic – to make you feel that you've whiled away the 1,002nd night with Scheherazade.