The 21st 'New American Talent' exhibit features a whopping 72 works of art, many of them created from everyday objects 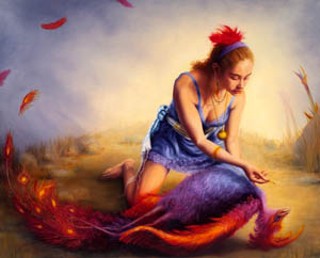 Reviving the Bird (From the Phoenix Series) by Karen Liebowitz 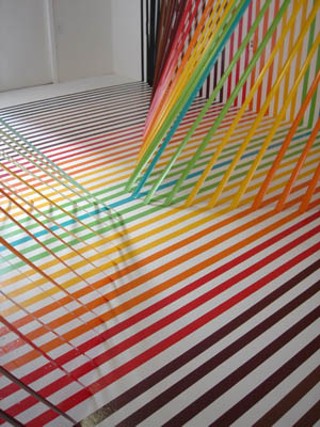 Chances are you'll notice at least one of the four modified "Exit" signs by Austin artist Kurt Dominick Mueller, installed in various places high up on the walls at Arthouse at the Jones Center. The sentiment expressed by the whole group, "Stay Here For a While," is a polite request that you might want to take Mueller up on. Arthouse is crammed with a whopping 72 artworks for the 21st iteration of "New American Talent." This year Arthouse invited Aimee Chang, curator of contemporary art at the Orange County Museum of Art in Southern California – she's also an alumna of UT-Austin's graduate program in art history – to jury its annual nationwide talent search. Chang narrowed the field of around 1,100 submissions from 48 states down to 56 artists. As Chang readily admits, she squeezed in as much work as she could, but what the show lacks in visual-fatigue space, it makes up for with sheer energy and a squeaky-clean installation. 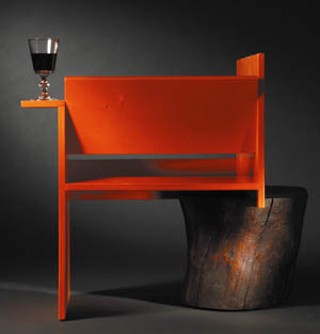 There aren't many unifying themes this year, but Chang chose a large number of pieces that incorporate found objects. Sasha Dela strapped gallon jugs of Crystal Geyser to a huge piece of weathered foam to create Portable Water Floater, a wry comment on our overcommitment to bottled-water consumption. I can't tell if Dela's device is actually meant to help one float or to drag you – and your water – straight down to the ocean floor. Jeff Williams' Microwave is just as menacing. A hole cut into the door of a large exemplar of the ubiquitous household appliance would seem to spew radiation at everyone in its path as the big box hums contentedly. (The gallery attendant assured me that Williams removed everything except the light and the fan – for her sake, I hope she's right.) A mountain of twisted umbrellas by Elisa Lendvay, stripped of everything except a few shreds of nylon that cling to metal spindles, is a bit more playful, but only because the spiky Umbra Bush is safely tucked away in a corner.

For her curator's talk, Chang presented "New American Talent: The Twenty-First Exhibition" in conjunction with "Thing: New Sculpture From Los Angeles," a recent exhibition of sculpture she co-curated at the Hammer Museum in Los Angeles. "Thing" is an apt, if cheeky, way to describe much of the work in both shows. For example, Katie Hinton makes a "thing" out of some "stuff" one might imagine finding while cleaning out the garage. Molt is an amalgamation of duct tape, Plexiglas, spandex, faux leather, acrylic paint, wire, and a shower curtain. Hung on a wall, the work vaguely resembles a horse (two thin strips of aqua fabric extending out toward the left side suggest legs), but beyond composition, color and texture draw the disparate elements together. There's a similar logic at work in Polly Lanning Sparrow's Recto-Verso (3 Configurations) and Mirror by Andrea Myers. Recto-Verso (3 Configurations) is a group of three rectangular elements that leans against a wall. The "stuff," in this case, is birch plywood variously covered in acrylic paint, linen, and felt. Like Molt, proximity to the wall draws immediate comparisons with painting, but the point here seems to be the artist's ability to change each element's position to achieve a new work. Mirror is another formal exercise, with a line of rainbow-colored fabric swatches laid out on the floor, which is echoed in a similar configuration of painted pieces of wood.

Other allusions to everyday stuff are more oblique. A diamond-shaped painting with precise percentages listed in each horizontal band of color, by San Antonio artist Galen McQuillen, is perplexing until one reads the label: Memorial Day Picnic: French's Mustard, 8 oz. Jar, Front Label. Stephen G. Nyktas' digital prints also reference product packaging, but here it's what's inside that counts. Inside Out Lip Balm and Inside Out Yogurt Container are pretty straightforward (haven't you ever wondered how a tube of lip balm would look turned inside out?); however, the images resulting from Nyktas' somewhat juvenile experiment are clean, simple, and rather charming. In contrast to Nyktas' approach, Noelle Allen's The Mortivore, Neil Bernstein's Enubus #2, and Jenny Heishman's Ghost Bunnies all conceal more than they reveal. Allen transformed a piece of driftwood into a resin-coated apparition that resembles a Jurassic bird. Enubus #2 buries a vintage children's rocking horse under layers of bandage, industrial resin, plaster, crude oil, and World Trade Center ash. Bernstein added a bent unicorn horn to the rocking horse, took off the rockers, and suspended the horse from the ceiling. It's a poignant subject, but I think Bernstein's approach is overwrought. Heishman's Ghost Bunnies are a little silly and very seductive. The opaque glass forms, mounted on carved Styrofoam bases, do indeed resemble sheet-draped rabbits, but the beauty of their gleaming surfaces outweighs the oddity of their content. 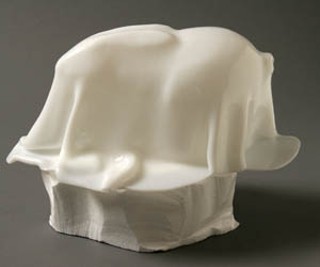 If I had to give a best-in-show award, it would go to Rebecca Holland for her pair of transparent plates of cast sugar, Pink Sheets, Large. On first glance, I thought they were simply sheets of pink Plexiglas – probably because I had just seen Tom Hollenback's Sluice, a steel and fluorescent Plexiglas construction installed in another room – but once I made my way into the corner and read the wall label, I immediately appreciated Holland's sweet play on minimalism's macho side.

Although sculpture is the big attraction at this year's "New American Talent," a handful of paintings impress. Lori Nelson's Teen Fiction, a gem tucked away in the rear hall, features a dark-eyed young woman blowing smoke rings in an eerie wood. The combination of stylized oil-paint swirls and heavily outlined forms gives the painting a nouveau-art feel; Nelson's heroine even seems shifty enough to be a femme fatale, akin to Aubrey Beardsley's illustrations of Oscar Wilde's Salomé. In the main gallery, the large painting of a lingerie-clad woman attempting to resuscitate a colorful phoenix is equally enchanting. With Reviving the Bird (From the Phoenix Series), Karen Liebowitz draws on the peculiar brand of history-painting established in Mexico during the 19th century. Liebowitz's version is campily updated with a lacy blue nightie, but her handling of paint is dead serious and really good. Robert Lee Vanderpool's Western Tendencies is at the other end of the spectrum; he comes closest to the sloppiness and nonchalance of works like Molt, which is installed on an adjacent wall. A recent grad of UT-Austin's BFA program, Vanderpool presents a hallucinogenic Southwestern landscape, complete with saguaro cacti and pastel-striped mesas. In this painting, however, nearly everything is striped, including the sky. A metamorphosing spotted leopard/striped-shirt-clad figure in the foreground is slightly bewildering, but the work's oozing surface and unnatural color palette signal a surreal denouement.

Hunter Cross, Rebecca Ward, and Michael Berryhill are among the standout artists from Austin. Cross contributes another proposal for an unrealized project, this time on Downtown Austin's rooftops (he showed several more earlier this year with the artist collective Open Doors at the Dougherty Arts Center). He'd like to blanket the tops of four buildings that flank Arthouse, plus the exhibition space itself, with a field of bright violet color just long enough to be captured by a satellite and loaded onto Google Earth. Once Cross' intervention entered the public record, High Five would disappear, leaving behind documentation accessible for around 18 months – the length of time it takes for imaging satellites to make their orbit of the Earth. Ward is a recent UT-Austin undergrad with a concurrent exhibition at Donkey Show in East Austin. For "New American Talent," she draped part of Arthouse's storefront window with evenly spaced strips of multicolored duct tape. Tape 5 is similar to Ward's contribution to the UT BFA show at Creative Research Laboratory in May but holds up well amongst the more mature competition here. Michael Berryhill's pair of graphics-driven pirate paintings combine carefully rendered schooners with figures encapsulated in geodesic orbs. Shiptrick left me wanting to see more, and we'll all have a chance later this month, when Berryhill is included in a group show at Volitant Gallery, a few blocks south on Congress.

The big problem with Chang's installation, which is otherwise excellent, is her treatment of video. There are two monitors installed in the galleries. Each shows a DVD loop of five or six videos, some of which are more than 10 minutes long. In what is either a sick joke or a subconscious slip, an artwork that incorporates a seating element is installed immediately adjacent to each monitor: Wells Mason's Umasi Chair and Mike Womack's Cloud, two stacked chairs mounted on a wall, beckon to those with sore backs and tired feet. Visitors who are willing to stand there for 20 minutes or more and watch a video loop should win a prize (I sat on the floor). Unfortunately, few, if any, of the videos are worth the trouble. Cat Clifford's stop-motion animation, It took him twice as long to walk his fence line; he wrote poems, and Tim Harrington's Biblical puppet show, The Flood, should have been given their own monitors, as well as the respect these artists deserve. As it stands, if I made video art, I doubt I would submit my work to "New American Talent: The Twenty-Second Exhibition."

Perhaps due to Arthouse's much-publicized Texas Prize, or maybe because of Chang's reputation, the number of submissions to "New American Talent" doubled this year. While I'm not sure to what extent this statistic contributed to the overall quality of the exhibition, juried shows are a mainstay for artists at many stages in their careers, and I'm glad to see this one growing. Austin has its own triennial juried exhibition at the Austin Museum of Art, a statewide biennial, and Arthouse's nationwide show. We're often criticized for being too insular here in Central Texas, and rightly so. At Arthouse, at least, you can catch a glimpse of what's happening in the rest of the U.S.