Stepping into D. Berman's exhibition 'HEAT' can transport you to a few alternate realities as powerful and reality-bending as any virtual world inside a computer 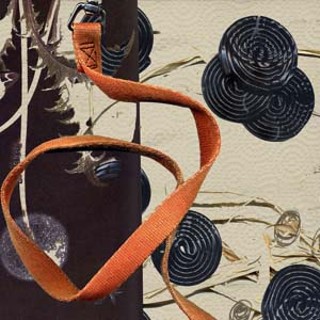 The high tech culture we live in has brought a seemingly new reality debate into play: whether or not virtual reality tools are appropriate and healthy enough to be used in teaching environments. Arguments on both sides are bouncing in and out of faculty and staff rooms from elementary through high schools, and the idea is up for consideration at the university level as well. In a recent publication titled High Wired: On the Design, Use, and Theory of Educational MOOs, Austin's own D. Diane Davis, professor of rhetoric at UT, raised questions about the divisions we draw between virtual reality online and imaginative reality offline. It seems that the primary concern raised by the anti-virtual reality camp is that virtual environments allow people to become something they are not and to inhabit worlds, personalities, and relationships that are not "real." Yet, as Davis astutely points out, whether onscreen or off, "real" is a very slippery term. Human beings are constantly about the business of redefining themselves through education, experience, and even role playing. Most of childhood play is a process of trying on different roles and personas, and for the adult world, books and art have always been valued for enabling readers, viewers, and participants to inhabit realms which are not particularly "real."

Take D. Berman Gallery's current exhibition "HEAT," for example. Each of the works in this summer show draws its viewer into a realm that is, frankly, neither here nor there. Cynthia Camlin's Grotto series, with its watercolors resembling stained-glass, creates "false" depth perceptions on flat paper. Faith Gay's playful and nearly neon sculptures are certainly not made for this life, and we could never actually inhabit Sarah Greene Reed's graphically designed visual environments, due to their mixed scales. Christopher Schade's gouache and acrylic environments offer tiny virtual realities of the sort where right-bending tree limbs burn in brilliant but unmixed patterns of red, yellow, and orange against designed and dreamlike backgrounds, and Steve Wiman's timeless work with found objects plays on our need for recognition, yet transforms common pieces of stuff into endearing landscapes of color and history that have surely never existed outside of his creation. As each of these works conjure other worlds, I begin to wonder if any art at all could pass the reality test championed by virtual reality's opponents. As a player in this debate, art, and the worlds created in its musings, stands as a pertinent example of the power, importance, and growth that potential offline virtual realities can offer under optimal circumstances. Can the same be said for online virtual experiences? Step into "HEAT" and try out the theory – and a few alternate realities – for yourself.