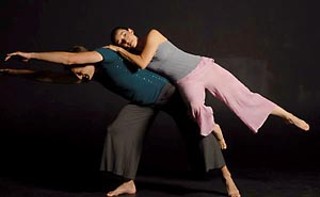 When I first walk into the lobby of Cafe Dance, Kate Warren's storefront studio haven for dance on Hancock Road, I find it full to the brim with dancers. Admittedly, the lobby is only about 10 by 10, but dancers are everywhere. I know they're dancers because they're all on the floor, and they're all stretching. But it isn't so much the proximity with the ground combined with the permutations of the human body that fingers them as the artists they so obviously are. It's the energy in the room. And if you hang with dancers long enough, you'll find the word "energy" coming up again and again.

The strikingly lovely Kathy Dunn Hamrick, who has been creating dances with the company that bears her name for the last eight years and devising dances in Austin for considerably longer than that, greets me in a hushed tone. "There's a class going on in there," she says, pointing to a door in the corner of the tiny, bright room, "And we don't want to disturb the energy."

There it is again. Few words better encompass what this collaborative of artists is all about, and this coming weekend, you can experience that vividly at UT's McCullough Theatre in their second large-scale concert of the season, And Then There Were Twelve.

Usually, the Kathy Dunn Hamrick Dance Company offers two major concerts a year, one in the fall and one in the spring, but this year they've switched their second concert to the summer, and, Hamrick says, "I'm a little bit nervous about the time change." She's also a little bit nervous about the venue change. The concert originally was scheduled for the State Theatre, which recently suffered a devastating flood due to a broken city water main, so the location had to be changed. "The State Theatre is our home," Hamrick says. "This would have been our seventh straight year there. And I know those people, and I know that space, and there are no surprises." "And they're so nice. They are so nice there," adds Warren, who serves as KDHDC's associate artistic director. "And it happened when we were just getting ready to send our postcards out and put a banner up," says Hamrick. "Everything was going to the paper. Everything had to be remade. We had planned everything for that theatre." Including the dances themselves, most of which had to reworked to fit the space at the McCullough.

Once class lets out, I'm led into a narrow hallway that opens into a large dance studio. I know I'm entering a dance studio because I can see the barres lining one wall and I'm asked to take off my shoes before I step in. Most of the dancers are already in the room, and they never stop moving. Never. Some run around, forward, backward. Some stretch at the barre. One simply stands in place, perfectly balanced on one foot, with the other leg extended outward, unmoving.

Eventually they begin rehearsing, but, interestingly, no one person seems to be in charge. There's constant discussion, constant communication. It's Hamrick's company, but Warren and Lisa Nicks, a company member who choreographed one of the three new pieces in the concert, do most of the talking, though most everyone has something to say. "I'm not interested in having people in the company that just take direction," says Hamrick. "I look for artists."

And she finds them. While I didn't get to see all of every dance, I got to see enough. In the first, "I'm Coming Back for My Wings," staged by guest choreographer Carolyn Pavlik, three dancers are anchored with lengths of tulle stretching off into the wings. Seemingly in stasis, they stand in place, moving and struggling against their bonds, twitching, straining, until suddenly they break free. While they only practiced the beginning of this dance, clearly it was about the struggle to enter the world. Hamrick choreographed the second piece, "Half Passing." With music by Austin's Chad Raines and the Elastic Wasteband, it reminded me of nothing so much as exercising on the bike path at Town Lake or simply walking down the street and experiencing the casual contact between myself and other strangers as we pass each other again and again. Most striking was the piece that makes up the second half of the concert, "Recognizing the Angel on My Shoulder." Subtitled "Mending My Pathological Need for Self Sufficiency," this dance by Lisa Nicks takes place in six parts, each of which has its own title: "The Well-Oiled Machine," "Lullaby for Unfulfilled Dreams," "I Didn't Know Them, but They Carried Me," and so on. I was privileged to see a rehearsal of this entire piece, and it is extraordinary. In one section, dancers flow across the stage like water, trios breaking into solos breaking into duos, moving constantly and inexorably, like a stream, like a river, like the rain. In a solo, Nicks offers a portrait of movement interrupted, gliding toward some end only to be drawn off elsewhere, to become something different. In still another part, Hamrick is flown, carried, rolled, flipped, and passed from hand to hand and foot to foot, all with exquisite athleticism and grace. With music by the Austin band Mundi, even in rehearsal I found it to be epic, uplifting, and ultimately inspiring in the way that only great art can be.

I didn't get to see any part of one of the dances because, technically speaking, it isn't a dance; the second piece in the first part of the concert is a dance film, The Five Challenges, by David Steadman. "David is a visual artist, and he's our graphic designer," says Hamrick. "And his wife Cherami is in the company. And when she got pregnant she said, 'Well, I still really want to be involved. Can David and I make a film together?' So David gave her five choreographic problems to solve. One of them – I hope I can get it right – was to make a phrase of movement that goes forward but appears backward in the film. Or something like that."

"He also gave her a time constraint," says Warren. "Each movement could only be two seconds long."

"For another she had to do 30 social dances in 30 seconds," says Nicks.

"I think they filmed it in a liquor store," says Warren.

"We're going to get all the details wrong," says Hamrick. "If the number one signifies a phrase, 1b is that phrase retrograded, which is backward. The number two is another phrase, 2b retrograded, and on and on. And then he gave her this chart, and she had to do those movements in his particular order. And he wasn't budging. He really wanted her to abide by the guidelines."

"And they're still married," says Warren. "And happily so. You should put that in there."

So why the title that sounds like a mystery and a children's story rolled into one? Says Hamrick, "For six or seven years, I worked with six dancers, and for years before that I had worked with the same group before I even had the company. And over time, all left but one. So at the beginning of the year, we held an audition.

"And now we are twelve."

And Then There Were Twelve runs July 8-9, Saturday, 8pm; Sunday, 5pm, at the McCullough Theatre on the UT campus. For more information, call 866/443-8849 or visit www.kdhdance.com.