In a new ad campaign, the Blanton redefines 'art,' raising questions about what it means

The Blanton Museum of Art's new "Art is Experience" PR campaign is canvassing Austin, pun intended. The slogan has shown up in every corner of the city. If you haven't received a postcard or sticker bearing the phrase in your mailbox, then you've almost certainly seen the myriad bold-colored ads on TV and billboards that announce a new definition for an age-old materialization of creativity. The promotional blitz is not only a catchy, effective, and vibrant way to integrate Austin's young population into the art culture, it's a whole new way of viewing and defining art itself. And while it may help to reposition the Blanton within the local community, the "Art is Experience" mantra goes beyond the building of a new museum and into the heart of some of art's most fundamental questions.

History has, through the course of time, temptations, and empires, seen art defined in radically different ways. "Art is beauty" may be the most popular answer to the question of what art is. Yet, from "art is communication" (think: Ransom Center, hieroglyphics, and cuneiform) to "art is teaching" (as it often was for the monks and religious clergy of the European Middle Ages), art has both defined and been defined by the culture it builds and inhabits. Both in the United States and elsewhere, the Sixties and Seventies saw "art is resistance" and "art is critique" spring up from the throes of a world divided by communism and capitalism and wracked with fighting in countries seeking independence after long periods of dictatorship and colonization. Against this shifting history, it is no small thing for the Blanton to send out smart orange stickers calling Austin to art that is now being defined as "experience."

But the Blanton was taking its cue from the people it wanted to come to the new facility it was building on the southern edge of the UT campus. Jessie Otto Hite, the Blanton's vibrant director, knew the new museum space would need to engage potential art viewers on familiar terms. "Early in the process of designing the new Blanton," Hite relates, "we did a branding study and found that Austin, as we knew, is full of creative and curious adults," and they wanted to know what would draw them to the museum they were creating. In a series of focus groups, words like "experience," "choice," and "inviting" kept coming up, along with phrases like "things to see and do" and, particularly among younger respondents, the desire to see something new that was "not your parent's museum." That led the Blanton staff toward the idea of transforming both the structure of the art museum and the public perception of what a museum is and could be, both for and in the Austin community, into one rooted in experience. 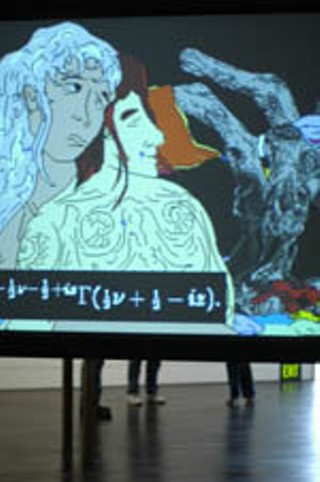 "Experience" has become a big word these days. The common understanding of the word has something to do with personal participation that is somehow transformative because of an interaction. But experience in today's culture is not that simple. We're less and less content to experience something through a book or watching or hearing about it secondhand. Increasingly, we want to get our whole selves involved, to immerse ourselves in a thing, via things like virtual reality, surround-sound movies, and interactive learning. This has led to changes in the way our whole society is driven. Joseph Pine and James Gilmore's book The Experience Economy: Work Is Theatre & Every Business a Stage relates how the American sales and services industries have rapidly undergone a series of consumer-oriented transformations from the industrial age to the information age. In the 1970s and 1980s, the authors write, "successful companies, such as Nordstrom, Starbucks, Saturn, and IBM, discovered that the best way to differentiate one product from another – clothes, food, cars, computers – was to add service," which led to a shift from a goods-based economy to a service economy. But now, this idea is slowly yet forcefully being superseded by large groups of consumers who are looking past service companies for engagement with brands that can offer the full encounters of an "experience."

With Blanton assistant director Ann Wilson's vision of a museum experience and ideas from The Experience Economy, Jessie Otto Hite led the Blanton team in the redefinition of their museum into an "experienced-based" institution. At a time when many older institutions settle for face lifts or consultant-driven rethinks, the Blanton snatched the opportunity to do something truly cutting-edge as a museum and for Austin. Hite proudly points out how their reinvention of the Blanton puts it in a unique position among museums today: first, in its engagement of the public through experience-based interactions; and second, in the fact that it is a solid institution with 40 years of collections-building and exhibition-making that is now being given the chance to start new, fresh, and now. Considering the marginal face of the Blanton prior to its move into the new building, and the outstanding public engagement they are currently experiencing – 30,000 visitors in its first month – they are certainly doing something right.

Still, while experience has certainly always been part of art, art as experience has always been just one branch of the art field among many. Yet we live in a world where, as Eva Buttacavoli of the Austin Museum of Art describes it, more and more "people are listening to their iPods, checking their cell phone messages, and surfing the Web all at once." In this scenario, experience is not only existence, it is an almost infinitely craved commodity. Billion-dollar industries are booming as our checkbooks run to catch up with our desire for instant gratification, coupled with a looming national attention deficit. So in this consumer culture we have nearly perfected, doesn't it just make good sense for, not only art museums, but artists who, as Sue Graze, director of Arthouse, says, are "expressing the now and creating what all of the rest of us are feeling anyway," to be a part of and even lead this experience-based scenario? Isn't it logical for art museums to be conducting target-market focus groups and basing their publicity campaigns on those results? For those of us who once believed that artists and the field of art are supposed to resist commodification, it seems we are all in for a big surprise.

Or are we? Galleries, museums, and art institutions of all kinds have been at this art and commodification game for decades, if not centuries. Even Michelangelo's work in the Sistine Chapel had a price tag attached. To be fair, the questions that outline the mixing of art and our experienced-based culture and economic system should be asked in a more complex way than I have just outlined. For example, why can't experience be resistance instead of its suppressor? As Annette Carlozzi, the Blanton's curator of American and contemporary art, astutely points out, Paul Chan's "Present Tense" exhibition at the Blanton offers a very powerful and pertinent example of experience engaging – and even inciting – resistance. In discussing Chan's two-channel video piece My birds ... trash ... the future ..., (2004), Carlozzi points out that as viewers begin to realize the broader perspectives offered by both sides of the dual imagery, "the decision to engage and deepen their experience of the piece by moving back and forth through space directly mirrors the political process for individuals in society." At the same time, keenly aware that the "spectacle, high-production values, and theatricality of My birds ... might overwhelm real investigation," Carlozzi notes, "Chan moved to the modest, more humble space of the floor, to the space we walk on for his next work, 2nd Light." In this digital projection piece, Chan again co-opts the viewer into a point of decision regarding his or her own involvement in the work, as each viewer's presence in, and even on, the projected image causes direct transformations of the image, either by shadowing, obscuring, or merely changing the visible sequence. In other words, as problematic as it may be, Chan's work calls for responsibility, not just gratification, from experience.

So perhaps Chan's investigation is really one of our own, and the Blanton's as well. Where art has been pulled out of its purist avant-garde margins into the center of culture, the same shift that is so profoundly marked by the Blanton's "Art is Experience" motto will make its way into the artworks that surface in its wake. Chan's body of work maps out a newly emerging ground for artists in an economy where "experience"-centered arts, such as video, film, and graphic design, are all pervasive. At the intersection of market research, stellar public relations campaigns, and our current "experience economy," art is again being redefined, and Austin, via the Blanton, seems to have suddenly found itself at the forefront.

"Paul Chan: Present Tense" is on view through Aug. 13 at the Blanton Museum of Art, MLK at Congress. For more information, call 471-7324 or visit www.blantonmuseum.org.